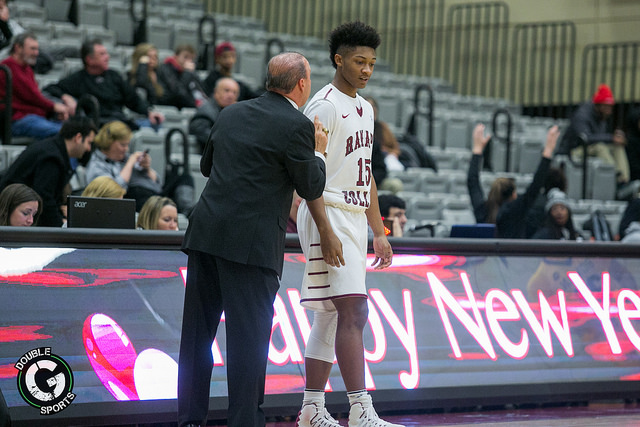 Ramapo College junior forward, and captain, Thomas Bonacum could only recall a few times head coach Chuck McBreen ever pulled him during a game, something that reminded him of his childhood. McBreen reminded Bonacum of being one of the best players Saturday at the Bradley Center.

The pep talk did wonders for Bonacum (14 points) who knocked down clutch back-to back trifecta’s late in the second half lifting Ramapo to a 78-70 win over New Jersey City University on Senior Day.

The win clinched Ramapo’s first NJAC regular season championship since 2012-13. The Roadrunners (22-2, 15-2 NJAC) receive a first round by in the conference tournament that begins on February 18 and will play at the Bradley Center on February 21.

Bonacum sat out Wednesday’s game against Rutgers-Camden due to a foot injury. On returning against NJCU, he said, “It felt great being back on the court and really hard watching that game on Wednesday but the guys picked me up and got the W.”

“I’m a competitor and little rusty in the beginning not getting a lot of practice reps but felt good in the second half,” Bonacum explained. “Coach sat me down as I was not doing too well but stayed confident I could make a big shot. I’m so happy for the seniors and coach because it means a lot to him and guys as we fought so hard for a long time and came in with the goal to win it.”

“A big win for our program and we didn’t want to put the pressure on ourselves to win down at Rowan,” McBreen said. “Tommy is a big time player and I said to him big time players make big time plays.”

“Hats of to them, they really shot the ball well and we talked about it in our two losses we lost the three-point line by 30 and tonight we lost by 21 and win by 8,” continued McBreen. “They shot only 40 percent from the field and our goal was to hold people under 39. In the end we shot 60 percent against them and they lead the conference and tops in the nation in field goal percentage defense in threes and twos. The key in the second half is we shot 80 percent from the free throw line (12-15) and Josh Ford making nine of ten.”

“We didn’t get a lot of offensive rebounds but they didn’t get that many as well and in the past 18 to 20 and easy put backs and kept them off the boards and that’s due to Sultan and Nick (Stanek),” said McBreen. “Our interior defense was excellent today and did a good job of controlling the dribble. Good teams’ find a way to win and we did today.”

The Roadrunners opened up the largest lead of the game at 66-57 with seven minutes remaining only to see the Gothic Knights charge back with a 10-0 spurt taking their first lead since 12:25 left in the first half. NJCU absolutely shot the lights out from beyond the arc in the second drilling nine of 15 three-pointers in the game and led by senior guard Jalen Harris pumping in a game-high 23 points and six triple’s.

Senior forward Sultan Aminu quickly gave Ramapo the lead back with a jump shot at the 4:19 mark. Junior guard Josh Ford (15 points) provided more breathing room with a spectacular left-handed lay up off glass while getting fouled in the process. Ford converted the three-point play extending the lead to 71-67 with 3:01 to go.

“Honestly, in the play of the moment just trying to do whatever I could do for my teammates and they give their best effort every day and I wanted to do whatever it takes to win and felt I could make that play,” said Ford. “We practice the up and down pace and coach has us moving constantly in practice and in the game we’re used to not getting tired.”

“Having Tom back is great, a brother to me and great person on and off the court and back in the lineup helped us tremendously,” Ford continued. “Sultan, Jermaine (Peart) and Cory (Soanes) put the work day in and out and we wanted to get this win for them as well as getting the number one seed. Being the number one seed, we like playing in front of our home crowd and having it in this building is going to mean a lot.”

“Josh was huge for us today and I told him it’s all about confidence, believing in yourself and game,” Bonacum said. “He made nine of 10 free throws from the line that was huge for us and made Jalen (Harris) work for every play even though he lit us up.”

Ramapo wraps up the 2016-17 NJAC regular season schedule at Rowan University on Wednesday at 8:00 p.m. Back on January 11, the Roadrunners defeated Rowan 96-78 at the Bradley Center with Bonacum scoring a season high 33 points.

“We still want to win at Rowan because we want to get the top seed in the Atlantic Region and get home games and easy way to get to Salem is through your own building,” McBreen explained. “If we go 23-2 and manage to win the semifinal and final and get to 25-2 and would be a number one seed throughout. We need to build up our résumé.”