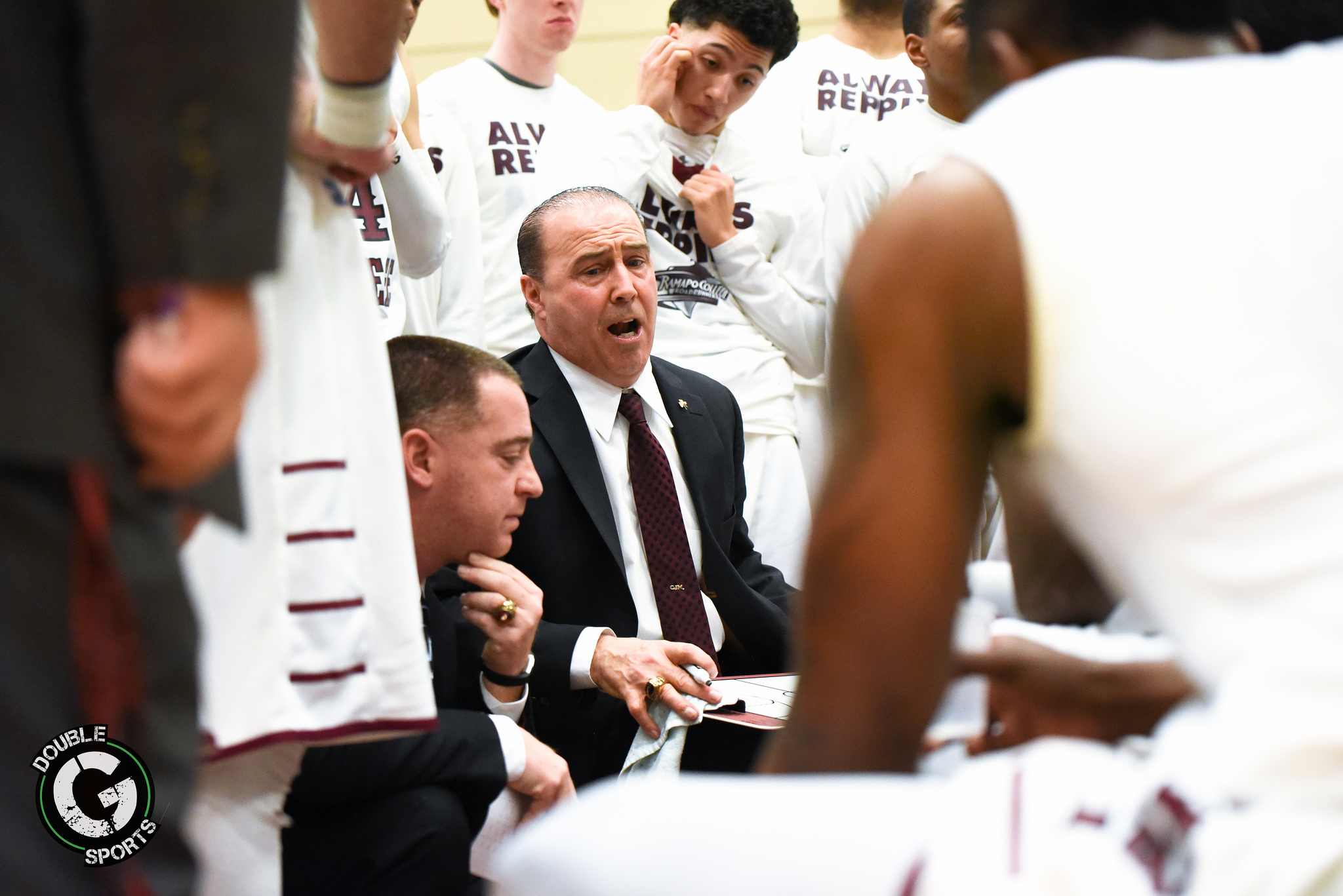 Ramapo College senior forward Christopher Moseley said the five seniors that start know how to close out games and have been here before and giving the same effort since the NCAA’s started and playing with a bigger urgency and really don’t want lose.

Moseley played the role of difference maker from the onset against Franklin & Marshall in the Sweet 16 Semifinal in front of a packed crowd of 1,458 at the Bradley Center on Friday night. Early in the first half, throwing down two monstrous dunks that brought not only people out of their seats but teammates and coaches on the Roadrunners bench.

“A good start to get the crowd pumped up and really fed off the crowd after the two dunks and gave motivation to the guys and to stop being nervous,” said Moseley. “I was doing everything to win this game, helping out on the side with blocked shots and focusing on making free throws.”

In the first half, Ramapo College led as many as six points and had the lead until 7:30 mark when Matthew Tate drained a trifecta putting Franklin & Marshall up 23-22. The Roadrunners were unable to contain Diplomats sophomore guard/forward Ignas Slyka totaling 12 points.

Slyka and Tate combined to bury 5 of the 6 triples Franklin & Marshall hit in the first half. Trailing 32-29 with 1:50 left, Ramapo ended the half on a 6-0 run with Nick Stanek (9 points) pouring in four of those points. Moseley and Thomas Bonacum combined to score 17 points as Ramapo shot 48 percent from the perimeter.

Moseley took charge in the second half tallying 10 of his game 18 points. The Roadrunners managed to turn the rebounding category trailing 19-17 at the end of the first half, up 28-24 midway through the second half. Meanwhile the defense shut the doors on Slyka holding him to zero points in the second while clamping down on the three pointer as the Diplomats shot an abysmal 3-of-17 from beyond the arc.

“We talked about doing a better job guarding the three-point line although our defense held them to 37% in the first half, they shot 46% from the three. We had to do a better job locating the shooters, get out and make proper switches and adjustments. They were getting tired, not getting great shots and coming up short in large part to fatigue.”

Ramapo expanded their lead to 52-42 with less than 10 minutes remaining. However, Franklin& Marshall responded with their own run thanks to play of Tate accounting for 15 of his game high 24 points in the contest and Brandon Federici dropping in nine of his 14 points. Bonacum (16 points) converted a three-point play boosting the advantage back up to 61-53 with four minutes left. The Diplomats simply refused to go away countering with a 7-1 run including a trey from Tate with less than two minutes to go.

The Roadrunners remained resilient knocking down their free throws including four from Moseley who went perfect from the charity stripe line and punctuated his impressive performance with two emphatic blocks to seal the 72-62 victory and first trip to the Elite 8 for Ramapo since the 2002-03 season. Senior guard Josh Ford contributed 12 points while senior forward Nick Stanek added 10 points.

“When I first took over the job I was able to turn the program over in my fifth year and get to the Elite 8,” McBreen said. “To do it on a regular basis is not easy and something I thought we would do on a regular basis. It took from 2005 to 2018 to get back to the Sweet 16. The big thing is we have home court and earned the right to be. I would love for the opportunity to take Ramapo to the Final Four and with these seniors.”

On Saturday night at the Bradley Center with tip-off scheduled at 7:00 p.m.: Ramapo (24-6) will face off against MIT 25-5 (Massachusetts Institute of Technology) in the Elite 8 Final. The Engineers defeated Middlebury 79-76 in the Sweet 16 Semifinals.

“No better opportunity than to play for the Final Four in your own gym and lucky enough to have it with a great crowd and fan base and carrying through tomorrow and get a W,” said Bonacum.

“No better place I rather than play at and Division III school,” said Moseley. “I love the home crowd, get it sold out and energy boost when they are behind you yelling defense and cheering you on and when you make a shot.”

McBreen on the match-up against MIT, “We’re going to have guard the three-point line, they have 8, 9, 10 guys than can shoot the basketball. We have to contain the dribbled first, if you don’t help they will kick it out to the shooters. They rebound the ball well and we have to do a better job on the backboards.”