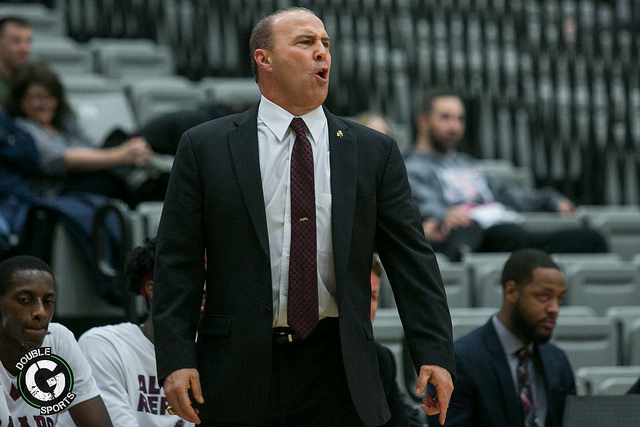 Coming off a rough and tumble 84-78 defeat at The College of New Jersey last Saturday that saw junior forward Thomas Bonacum sustain an injury late in the contest, the Ramapo College Roadrunners were attempting to start another winning streak.

In the teams’ first matchup, Rutgers-Camden squad that raced out to a 20-point halftime lead before a furious second half rally lifted the Roadrunners to 94-86 win. This time around, Ramapo (21-2, 14-2 NJAC) set the tone early racing out to 45-27 halftime advantage and poured it on in the second half for the 87-64 win at the Bradley Center. The Roadrunners remain undefeated at home with a record of 9-0.

“We knew with Tommy getting hurt down at TCNJ and knowing most likely he wouldn’t be able to play with a foot injury, Nick Stanek was inserted into the starting lineup and did a decent job in place of Tommy,” Head Coach Chuck McBreen said. “Other guys came off the bench and contributed with Pat Peterson scoring 10 points and we got to play 14 players and nice contributions from a lot of different people.”

“I was very happy with our numbers on the offensive side winning in the points 50-28, bench points 36-8 and points off turnovers by 12,” he continued. “At the end of the day we won convincingly and all is positive at the end of the day. Chris (Moseley) has played better of late and shooting the ball at a high percentage and knocked down seven of seven from the free throw line.”

The Roadrunners also had a big edge in other categories with 33 points off turnovers, sinking 6 of 15 three-pointers and 18-second chance points.

Now, Ramapo turns its attention to another critical NJAC match-up against New Jersey City University on Saturday and Senior Day at the Bradley Center with tip-off slated for 3:00 p.m. The Gothic Knights ended the Roadrunners school record breaking 14 game-winning streak back in January with a 76-70 victory. Currently, Ramapo holds a game and half lead over NJCU in the NJAC standings.

“We got two big games coming up and only one on our mind is NJCU,” said McBreen. “We have to avenge the loss down their in OT. We had a four point lead with three minutes to go and it’s going to be a tough one but good thing is we’re home and see of we have a better fate.”

“Hopefully Sultan (Aminu), Cory (Soanes) and Jermaine (Peart) can perform well and we get a good crowd and environment. They will be honored before the game and Senior Day is to honor them before the game starts and once it does to go about our business like any other game. We’re trying to win a game and lock down the number one seed.”

“We have to do a better job defensively as they hit 10 3’s in the last game and we looked at the video of OT and didn’t do a good job of defending the dribble and doing what we do as a team. With a four point lead they scored on six straight possessions and have to clean it up defensively if the game gets close and stops.”