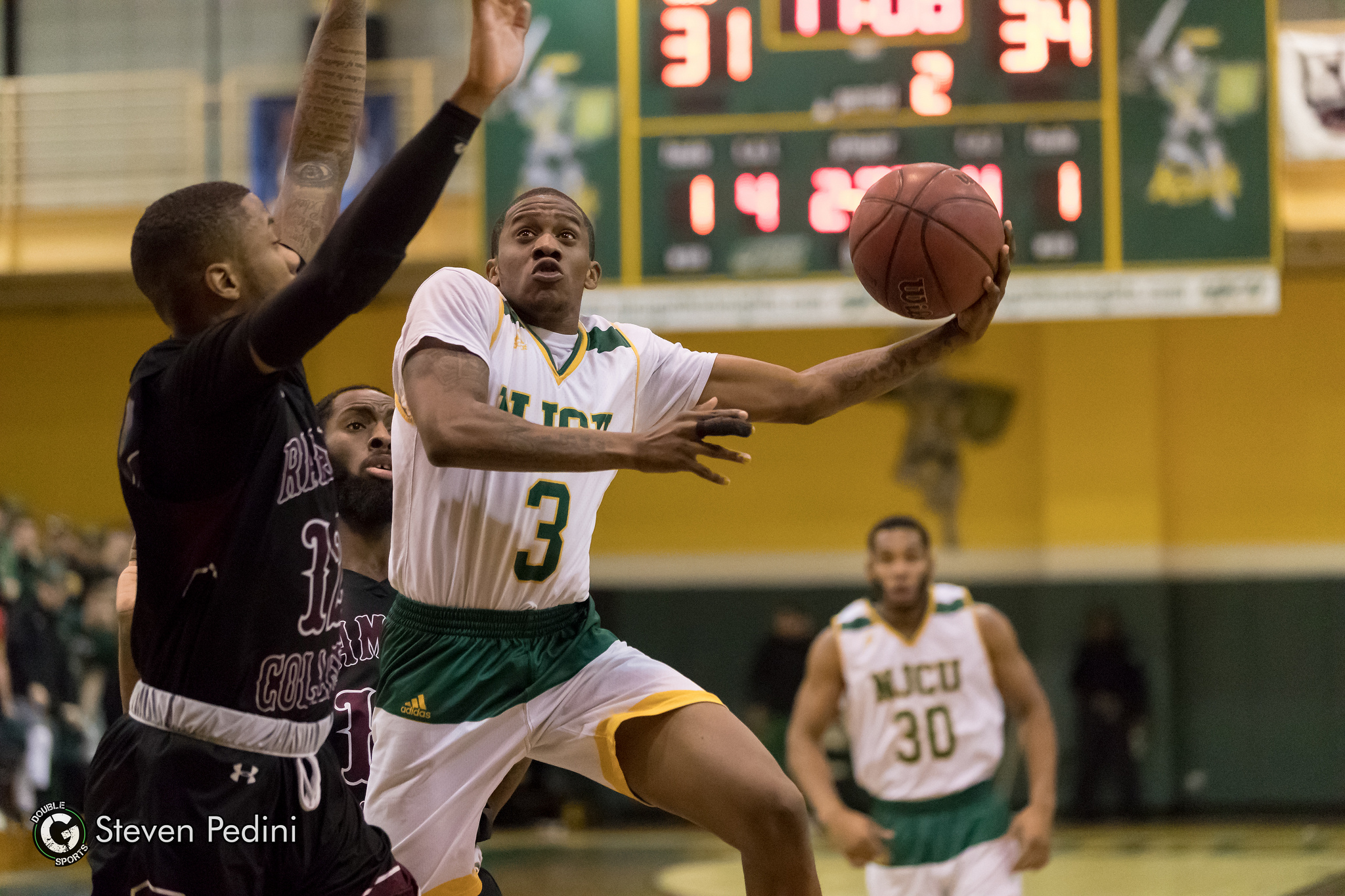 For the first 23 minutes of action the Ramapo College Roadrunners were in firm control of the NJAC Tournament Semifinal game on Tuesday night against New Jersey City University at the John J. Moore Athletics & Fitness Center. In the first half, the Roadrunners came out a motivated group twice leading by five points. Employing an aggressive defense that limited the Gothic Knights to 24 percent shooting from the field and 2 of 15 from three-point land.

Once again the dynamic duo of Rob Lewis and Rob McWilliams led the way scoring 19 of Ramapo’s 29 points as the team took a 29-25 lead at the intermission. The Roadrunners shot 41 percent but even more impressive sinking 9 of 11 free throws.

Up 36-32 with less than 17 minutes left in the second half, NJCU ignited a rebuttal by going on a 21-9 in a nine-minute blinding span that got the home crowd whipped into a frenzy. After scoring a combined six points in the first half, James Richardson (14 points) and Denzel Banks (15 points) ended up tallying 23 points as the Gothic Knights shot near 49 percent.

Ramapo stemmed the tide by forcing NJCU into a couple of shot clock violations. A 6-0 run capped off by a jumper from McWilliams trimmed the deficit to 53-51 with 4:31 remaining. Just when it appeared the Roadrunners were poised to make a big run Gothic Knights shooting guard Lavrone Green canned a pair of critical trifecta’s that extended the margin to 59-53 with 2:17 to go.

Banks sealed the Gothic Knights (20-6) 66-58 win on a lay-up with 12 seconds remaining and denying the Ramapo a third straight trip to the conference tournament championship and three-peat with a lay-up with 12 seconds left. Lewis finished up with a game-high 14 points while McWilliams chipped in with 14 points. Outscored 41-29 in the second half, the Roadrunners struggled at the charity stripe line hitting only 8 of 14, rebounds 19-15, points in the paint 26-16, bench points 17-8 and fast break points 10-2.

Head Coach Chuck McBreen on the loss, “We gave up too many baskets in the second half and then we fought to get back it to two with three minutes to go. Lavrone hit back-to-back three’s to get them separation and that was a killer because we had all the momentum. With that said we had it to four when Battle took a three but went in and out and would have had it to one. We let up 41 points in the second half.”

“What happened in this game they were like the old Ramapo that have depth and pressed us like the old Ramapo and wore down. We got tired and they beat us up the floor with run-outs, easy baskets and getting to the rim. Our role is to get back in numbers and close out driving lanes and we were totally exhausted. Credit to Jersey City because that is how we played for many years. We lost five starters, pat Peterson, Matt Latka out with a broken hand and then herniated disc and 7 of your top guys. No excuses and they did a better job, work us down and able to pull it out.”

“Rob Lewis did not want to end his career so he gave it his all and battling a blister on his foot and played really hard with 19 and 9 and almost another double-double. Asking him and McWilliams to go for 40 and they did the best they could. We needed other guys to step up and didn’t tonight.”

Ramapo (18-9) will now turn to Sunday’s NCAA Division III Tournament selection show and see if they can make it three consecutive years of appearing in the tournament.

McBreen on the NCAA Tournament chances and regular season, “We are going to be on the bubble and outside looking in. Our strength of schedule is one of the tops in the country and regional ranked wins tops in the country. Hope they take a look at Wisconsin-Oshkosh two years ago at 17-10 and we have one win better record than them. It will depend on the teams’ that are supposed to win then going to give at larges for us to be in the mix. We’re third in the region behind Jersey City and Rowan.”

“Once we got going in the season and to 15-5 we went 2-3 during a five-game stretch and let games get away that was disappointing. Still when we reflect back on what we had coming back and if you told me before the season I would have lost the guys I did, Pat Peterson and Matt Latka 18-9 would be something we’re happy with.”