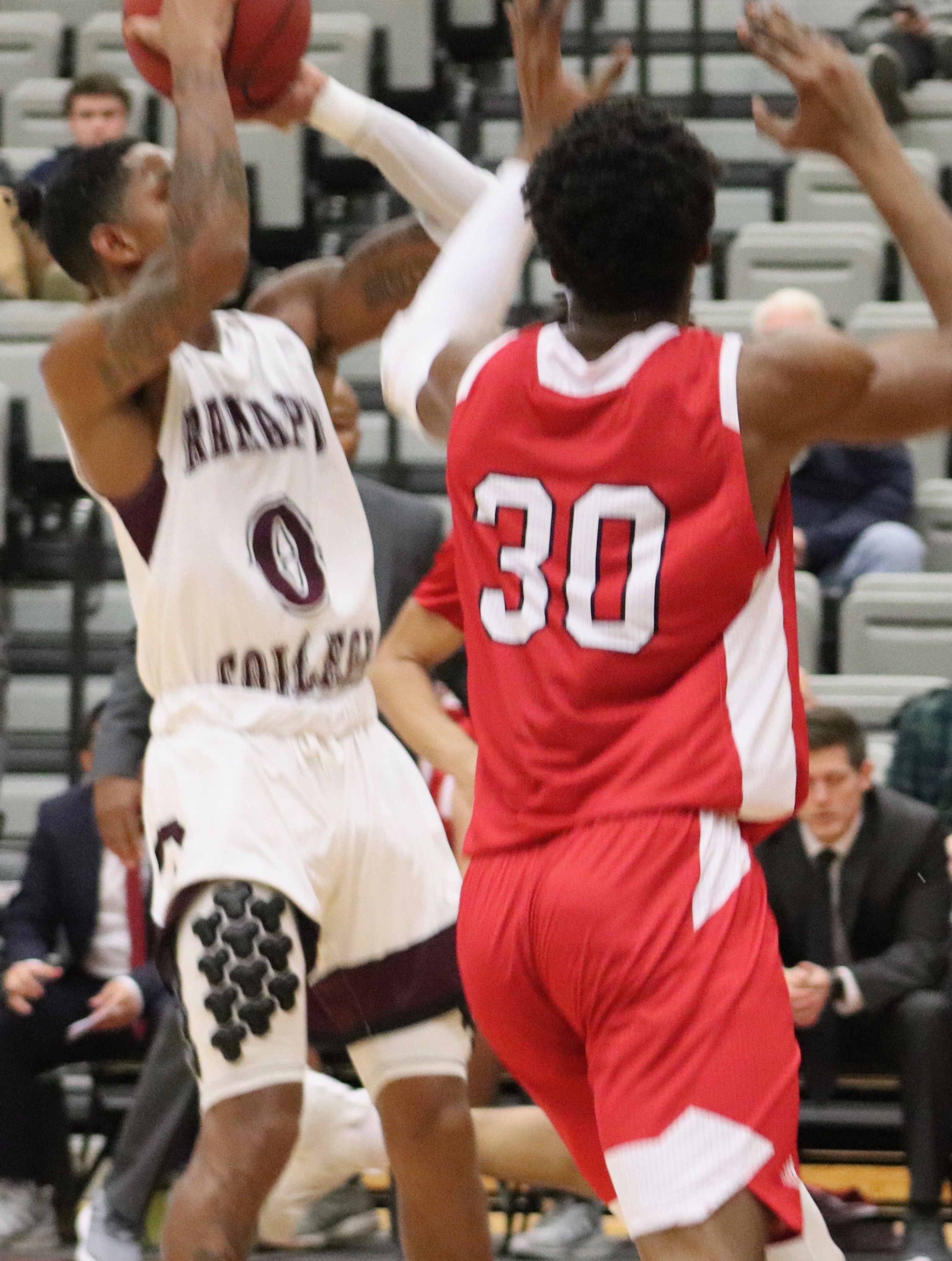 Winners of three straight, the Ramapo College Roadrunners hosted the Montclair State Red Hawks on Wednesday night at the Bradley Center. When the teams’ faced off last time back in November at the Panzer Athletic Center, the Red Hawks won convincingly 95-75, had five players in double figures, tallied 55 points in the second half and dominated in rebounds 47 to 27, knocked down 13 trifecta’s and shot near 50 percent from the field.

A physical battle ensued early on in the first half with lots of battles down low in the paint and plenty of scrums. Emotions were very high as the refs assessed Ramapo College Head Coach with a technical foul at the six-minute mark. Tied at 32 with four minutes remaining, the Roadrunners ended the half on an 11-4 run capped off by Jason Battle sinking a trifecta at the buzzer. Held to eight points at Stockton on Saturday, Kashaun Barnes poured in 13 of his game high 18 points as Ramapo shot 41 percent from the field and made 10 of 12 free throws.

Despite missing star point guard Myles Mitchell-White, Montclair State still had plenty of offense as Eddie Emedoh dropped in 16 of his 20 points in the first half. The Red Hawks came out attacking the rim early in the second with Emedoh and Akbar Hoffman who netted 19 points leading the charge as the Red Hawks tied the contest up at 51 with 14 minutes left on the clock.

With Matt Latka and Andre Morgan each saddled with four fouls apiece, it was the bench combination of Jordan Zagadou and Connor Romano that provided a much-needed spark. Both players hit clutch jump shots putting Ramapo up 64-59 with less than eights minutes to go. Romano was not finished canning a triple with four and half minutes to go extending the Roadrunners advantage to 69-62. After Montclair State trimmed the deficit to 69-66, Rob McWilliams buried a shot from beyond the arc with one minute remaining.

It came down to the free throws in the final seconds as Ramapo managed to hit three out of six for the 75-69 victory, fourth win in a row and extended undefeated home winning streak to 22 in a row. Rob Lewis finished with 13 points, Jason Battle contributed 11 and Zagadou had 10 points. The Roadrunners drained 17 of 24 from the charity stripe line and shot 49 percent from the field while holding the Red Hawks to 41 percent shooting.

Head Coach Chuck McBreen on the win, “Connor was a 1,000 point scorer coming out of high school and Jordan was able to do it in high school. Tonight you saw the old Jordan and if he can play like this will allow me to do some more subbing and get guys on the floor and little more rest. The most minutes he has played all year with 18 and did a good job for us tonight and I told him how proud I was of his effort”

“If we can get this kind of balance because Kashaun and Rob(Lewis) are playing way too many minutes and we need to be fresh. We couldn’t get a stop but never relinquished the lead and that was huge. Able to stay in front and last three to four minutes make plays and Rob McWilliams buried a three from the corner and Jordan took a big charge. We talked about that last game we lost the free throws and they got 27 and we had 20 or 21 and important stat to win as we got 24 to 14 for them. They took 28 three’s and we took seven”

“We talked about holding an opponent under 70 and they had to hit a three at the buzzer to get to 69. We changed out of zone to man and did a much job covering. They were a plus 13 coming into the game in rebounds and only won the battle by five. I talked to the team about if we keep the backboards close”

Kashaun Barnes on the victory, “It was a really big win and important for us. We felt they got the better of us last time and knew we could play better than that. They are a good team, taking nothing away from them and their point guard is down but at the end of the day you still have to play through it. That is the way we need Connor and Jordan need to play and takes so much pressure off the starters”

“Rowan and Jersey City are tied for first place and teams’ ahead of us have to play on our court, McBreen said. If we want this thing to back through the Bradley Center we have to find a way to win Saturday and last game of season against Jersey City. Too many turnovers and playing from behind the last time at Rowan and didn’t play well the whole game and have to come to play from the get-go on Saturday”

Can Seton Hall rebound from tough stretch to start the year?
Ramapo College jumps to 2nd in NJAC with 77-65 win against Rowan
Posting....