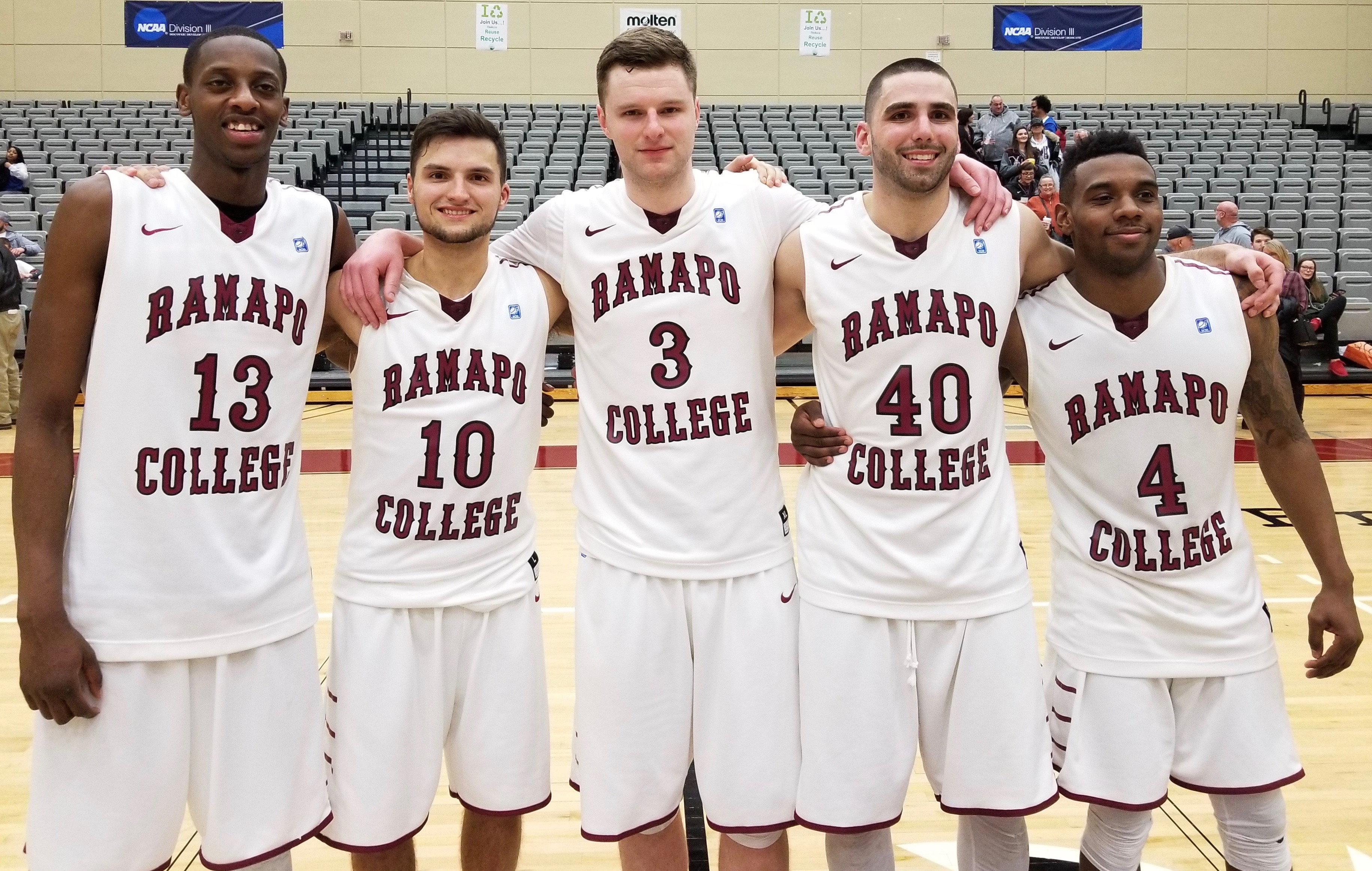 Ramapo College head coach Chuck McBreen said afterwards he had not given it much thought about “Senior Night” at the Bradley Center on Wednesday where Thomas Bonacum, Christopher Moseley, Nick Stanek, Jimbo Long and Josh Ford were honored for their achievements in a pre-game ceremony.

“When they started coming out one by one and realized I’m not going to have them anymore, it got a little emotional for me and I’m not usually the emotional type in my time here but for some reason when Tommy (Bonacum) was the last one it really hit me that it’s coming to a close,” said McBreen. “At the end of the day they have been special for our program and trying to do something special this year but hasn’t been easy and a lot more difficult.”

Once the game got underway, there was plenty riding on the line for the Roadrunners, the number one overall seed in the NJAC Tournament at stake. Coming off a season high 26 points at New Jersey City University, Bonacum came out strong pouring in 13 of his game high 18 points while pulling down 10 rebounds. A close contest early on, Ramapo started to get some separation opening up a 28-20 advantage with less than eight minutes remaining. Rowan charged back with a 6-0 run only to see the Roadrunners expand the margin to double digits at 37-26 with less than four minutes left. Eventually Ramapo would take a 41-32 lead at the intermission break.

In the second half, Rowan burst out of the locker room going on a 7-0 run in the first 1:41 of action. Held to six points in the first half, Profs forward TJ Booth lit up the score sheet tallying 17 points while guard Nick DePersia delivered 10 of his 16 points on the night. With the Roadrunners continuing to struggle from the perimeter, Booth’s lay-in with less than 15 minutes to go gave Rowan its first lead since the 17:23 mark of the first half. The surge would continue to grow as the Profs went on an 11-2 run, widening the gap to 58-50 with 9:42 to go.

After knocking down 11 of 14 free throws in the first half, Ramapo relied on the charity stripe line down the stretch as sophomore forward Jordan Zagadou, Stanek and Moseley (15 points) combined to go a perfect 19 for 19 allowing the Roadrunners to claw back within one point at 61-60 with 6:24 left on the clock. Moseley put Ramapo back on top with a three point play less than 30 seconds later.

Rowan managed to slice the lead down to one at 69-68 with 3:12 remaining but Bonacum drained a trifecta pushing the advantage back up to 72-68. Leading 74-72 with 1:36 to go, sophomore Patrick Paterson’s(13 points) off-balance shot before the 30-second buzzer clock went off put the Roadrunners up for good. The combination of Ford and Moseley finished it off hitting six of six free throws as the Roadrunners were a sizzling 30 for 35 from the free throw line. For a second consecutive season, Ramapo (19-6, 15-3 NJAC) went undefeated (10-0) during the regular season at the Bradley Center and notched back-to-back NJAC regular season titles.

“We come out flat as can be and looks like were dead,” McBreen said. “We win the game because of the free throw line, Jordan (Zagadou) and Stanek each six for six and Moseley seven for seven and only shot 38 percent for the game, 34 percent in the second half. Pat (Peterson) is always a fierce competitor and pretty clutch player and guy you want taking shots down the stretch and able to make some. We went bucket for bucket, got some free throws and stops and able to close it out. We wanted to be the number one seed badly and real important for us.”

“I didn’t want to get caught up in the number because that’s what bites you in the butt. This building has been special to us, nicest place in the NJAC. We have been able to find a way to be good here. The first year when this building was built we went undefeated (15-0) and all the way to the Sweet 16 and lost our first game”

By clinching the top seed in the regular season, the Roadrunners earned a first round bye in the NJAC Tournament, meaning they will not have to play until February 21 at the Bradley Center at 7:00 p.m. facing off against the winner of Rowan vs. Montclair State.

“There is no easy game and see how hard it was tonight against Rowan,” said McBreen. “We got our work cut out for us this week. We talked to them about getting to 20 wins and at large bid.”