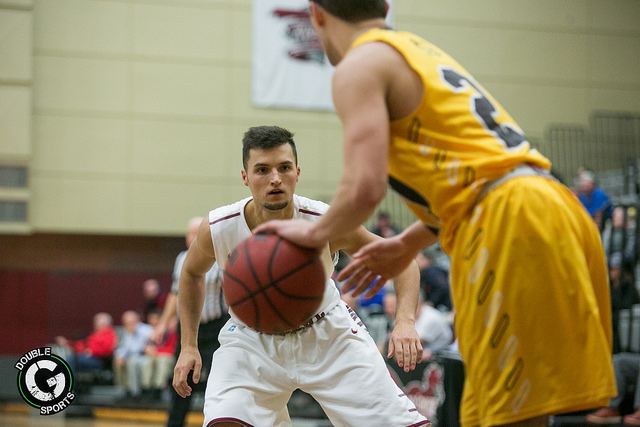 There will be a lot on the line tonight at the Bradley Center on the campus of Ramapo College.

It’s a 7pm tip-off featuring No. #1 seed Ramapo College Roadrunners (24-2) and No. #3 seed New Jersey City University Gothic Knights (21-6) in the NJAC Tournament Championship Game. The winner gets an automatic bid to the NCAA Division III Tournament and possible number one seed.

The last time Ramapo swept both the NJAC regular season and tournament championship was back in 2013 when they finished with an overall record of 23-5. New Jersey City reached this year’s final after defeating Stockton University in the quarterfinals, 97-87, and TCNJ 77-69 in the semifinals.

“The biggest game for us in four since when we won the last one,” Ramapo Head Coach Chuck McBreen said. “”It’s real important and completes the mission that we have been on and will put us in the position to get the No.1 seed in the region and possibly four games in the NCAA tournament and best way to get to the Final Four. It would be the best record in school history and only other time 2002-03 team that went 26-4 and lost in the Final 8.”

Ramapo and NJCU split the regular season series with the Gothic Knights ending the Roadrunners 14 game-winning streak on January 14 at Jersey City. In that game, Ramapo was held without a three-pointer for the first time up to that point in the regular season. The Roadrunners rallied to send the game into overtime tied at 61-61 and held a 65-61 advantage before NJCU went on a 15-6 run to secure the 76-71 victory.

Back on February 11, the Roadrunners and Gothic Knights were involved in another tight contest with Ramapo going on a 10-0 spurt to take the lead midway through the second half. NJCU stormed back relying on three-pointers (15 for 31) to get them back in the game. However, the Roadrunners hit several clutch free throws for a 78-70 victory, clinching the NJAC regular season championship.

“These are probably the two best teams’ in the league and Jersey City slipped up late and came in third but I considered them all year the best team in the conference strictly because they rebound and defend so well,” McBreen stated. “It comes down to if we can rebound and defend with them and take care of the basketball.”

“They shot 15 of 31 3’s and not the greatest three-point shooting team but had a phenomenal night,” he continued. “Hopefully we do a better job of guarding the three-point line and get them to miss some shots. Our bench has been huge for us all season and one of the better benches and depth in the country and asset for us all year long.”

“Chris (Moseley) has been getting better as the season went on and 2nd team All-Conference,” McBreen explained. “These are the biggest games of the year and need big players to make big time plays in situations. You have Tommy, Sultan, Josh, Pat and Cory that makes other teams’ focus on not just one guy.”

Junior forward/captain Thomas Bonacum on tonight’s final, “A huge game and if we win get into the NCAA tournament and don’t have to worry about an at large bid. There are going to be a lot of people here tonight and none of us have ever been in an NJAC championship game. We’re going into it together and playing a good, tough and physical team so we have to match their toughness, energy and effort if we want to come out on top.”

“We shoot the ball very well at home and they hit 15 3’s last time so we need to close out their shooters and make sure they don’t go on runs,” continued Bonacum. “I believe the team that makes most easy shots, gets most easy buckets and often wins. Our mentality all year is to get points in the paint and get to the basket.”

McBreen agreed with the idea of having an advantage playing at home. “The biggest thing we wanted to get is the home games and play on our home court,” he said. “Having that advantage and hoping to get a good home crowd behind us and get the job accomplished.”