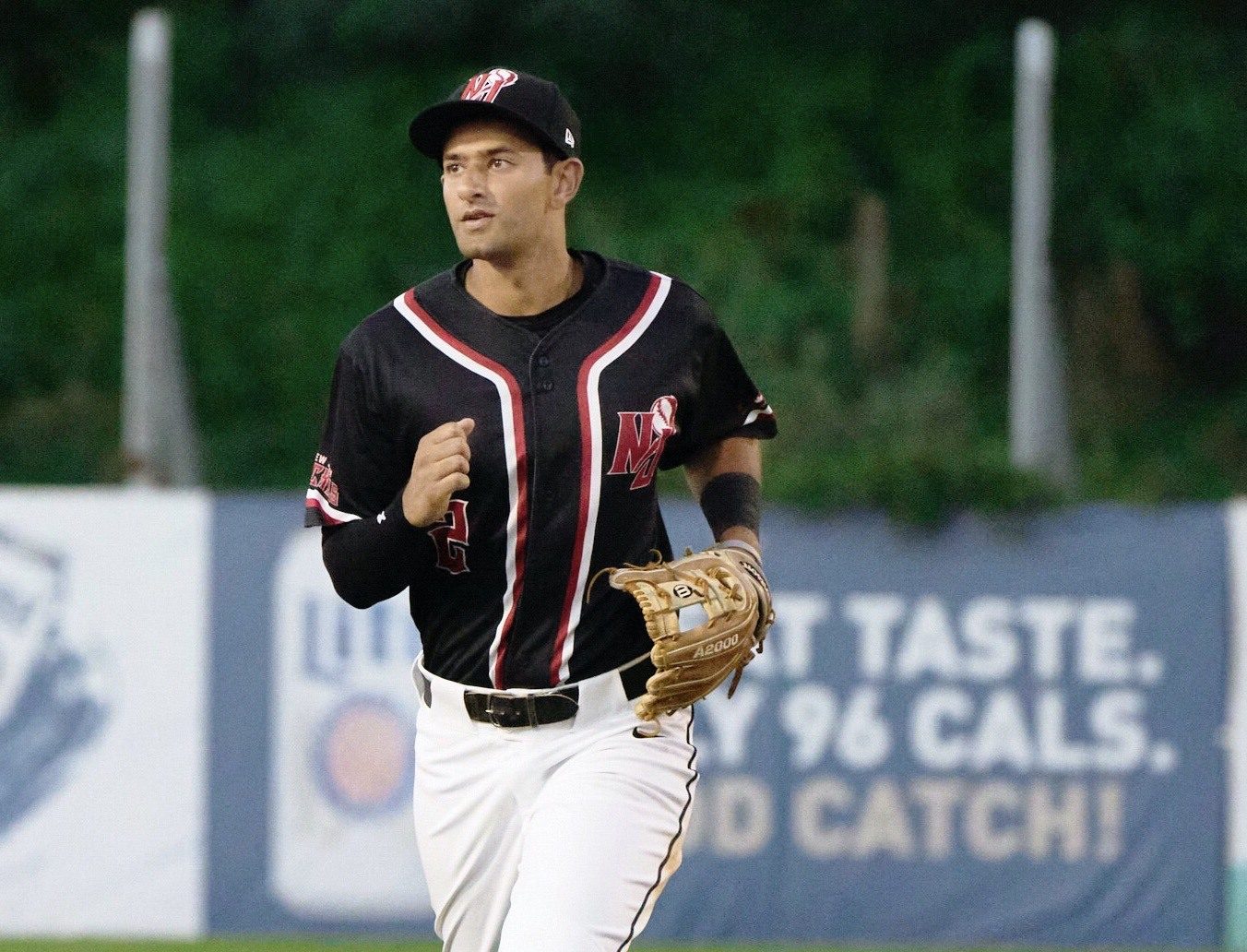 Growing up in Ellicott City, Maryland Raul Shah played many sports, whether it was soccer, tennis, golf or baseball. While attending Mount Hebron High School, he discovered baseball was the sport he enjoyed playing the most.

A two-time First-Team All-Howard County athlete, Shah hit .373 and not only was awarded the Allen Byron Memorial Scholarship but was named to the Brooks Robinson All-Star Game. In 2011 Shah was named the Diamond Nation MVP and Defensive Player of the Year and a member of Team Maryland in his junior year.

“I wound up making the Brooks Robinson All-Star Game. It’s the top 40 players in the state of Maryland.”

Making the Brooks Robinson All-Star Game was no easy feat. Players receive nominations based on their stats, and from there, tryouts are held in four quadrants based on players’ location. Once 100 players are selected, they take part in standard pro workouts and scouts watch them play a game. Eventually, the number dwindles to the top 40.

“[In my tryout] I would sprint to shortstop and from shortstop to the dugout as fast as I could every single inning,” Shah reminisced. “Apparently one of the coaches who was considering me saw that and that’s what put me over the edge combined with my performance… I got the chance to play in Camden Yards, which was one of the coolest things ever.”

Raul Shah decided to stay close to home for college. While attending Johns Hopkins University, Shah majored in economics with a minor in entrepreneurship and management. And one of the best parts about Johns Hopkins was Shah’s chance to play baseball.

Shah made his first collegiate start against Oneonta State where he went 2-for-4 and collected his first RBI.

“I remember that very well, it was freezing and snowing, probably 25 to 30 degrees,” Raul Shah described. “It was a doubleheader where I was sitting down for three hours.”

In his sophomore year, Shah doubled the number of games he appeared in (35) and made 27 starts. But Shah’s best season occurred in his senior year (2016). Shah batted .360 and finished the season with five home runs, 14 doubles, 40 RBI’s, a .537 slugging percentage. 415 on base percentage and .961 fielding percentage while playing second base.

For Shah it was less about the statistics, and more about the help that he received from the coaching staff and relationships he built with teammates.

“Coach (Bob Babb) has been there a long time, and he teaches you how to play the right way,” Raul Shah noted. “He does a good job of getting on you but also giving you the space and teaches you how to be a good person. Every Sunday the guys would go over to their house, cook food and give it to the church.”

On top of Coach Babb, Shah learned from hitting coach Jonas Fester — one of the greatest fungo hitters Shah has worked with — and first base coach Gabriel Castellano, who would “cheer people up in a minute”.

On top of the coaching staff, Raul Shah met some of his best friends.

“Everybody looked out for each other. Even after college there is a very connected community. An email thread goes out once every couple of weeks with updates on what everybody is doing…There are a lot of community events for the baseball team, people usually meet up in New York City, Washington D.C. or here at Johns Hopkins at Baltimore.”

Playing his final baseball game in a Johns Hopkins uniform turned out to be a unique experience for Shah and his teammates. While they were playing in a regional game, graduation was taking place.

“We lost and I remember I was fairly disappointed,” Raul Shah said. “We had a private graduation ceremony where we went to the president’s room. They had a live band there and actually played “Take Me Out To The Ballgame” and everyone’s family and friends were there.”

Looking to keep his skills fresh Shah signed with Plattsburgh in the Empire League where he played for two seasons. In his first season with the Thunderbirds, Shah batted .314, tallied 32 RBI’s, 55 hits, 31 runs scored, 34 walks in 57 games played.

In 2018, Shah moved on to play for the New York Bucks before returning to Plattsburgh last year.

“It didn’t materialize with the Royals so a lot of people said why don’t you play independent baseball,” said Raul Shah. “I heard the term, this is not even a joke, I genuinely thought it was a men’s league. I wound up signing with the Empire League and it was a great opportunity to put up great numbers and use it as leverage to get to a higher league.”

A Fresh Start in Independent Baseball

After playing with the Thunderbirds and Bucks, Raul Shah was slated to play for Southern Maryland in the Atlantic League this season. But those plans were altered when the season was cancelled due to the COVID-19 pandemic. However, Shah caught a break when a couple of managers in the Frontier League put together a team that competed in a collegiate league against Santa Barbara Foresters in Santa Barbara, California.

“They’re one of the best teams’ I have ever seen in my life,” Raul Shah described. “The competition was really good and my expectations for the summer I would stay out there and then come back and play in summer or winter.”

Once again Shah’s season took a different turn with returning to the East Coast and signing with the New Jersey Jackals. The Jackals participated in the All-American Baseball Challenge that featured six teams with two playing at the Sussex County Miners, New York Boulders and New Jersey Jackals.

In his Jackals debut, Shah hit a double and scored a pair of runs. The icing on the cake occurred with the Jackals defeating the Sussex County Miners in the championship series.

“The first interaction I had with the Jackals was a couple of years ago with manager Brooks Carey who saw me at the Rockies workout. There was never really a fit but always kept in touch with Brooks,” Raul Shah explained. “I called Brooks again and he let me talk to the current manager Jimmy Efre who said why don’t you fly in.”

“I remember the first day I got to Yogi Berra Stadium, and I was walking down the stairs and thought it looked beautiful on a clear day. I met the rest of the team, realized that I actually had played with a lot of these guys before and felt pretty much right at home.”

From that moment on, Shah hit the ground running. In his first plate appearance, Shah batted with the bases loaded and hit a double. The Jackals took the lead in the first inning and never looked back.

For Shah, the most important part of playing baseball is the preparation and training.

“I have always felt that if I take care of my hitting preparation in the offseason, I have all the fundamentals down in the season where I don’t have to think about anything mechanically,” said Raul Shah. “I genuinely don’t think about stuff in the box, with the exception of what the pitcher is going to throw at me. When you have your mind at ease like that it becomes significantly easier to just play the game.”

“My offseason is pretty grueling.”

“I work on the pitching machine so I can hit off-speed, see the velocity, curveballs, sliders and change-ups and pretty much hit off it every night. Three times a week, I do track practice and go to the gym, each for two hours. Then I have baseball practice at night from 7 to 10 p.m. Monday, Wednesday and Friday… I have always taken pride in being labeled the hardest working player in professional baseball.”

When it comes offensive stars, Shah idolized Ichiro Suzuki, who played 20 years in MLB for the Seattle Mariners, New York Yankees and Miami Marlins. He played in 2,653 games and tallied 3,089 hits.

“I don’t think there was another player in the league that could hit, throw, run and play defense the way he could,” Raul Shah remarked. If you could find a player that would routinely hit .360, put up a 1,000% field percentage, throw 95 miles per hour from the outfield and run 0 to 60, there is no single player that even comes close. He is so modest, never had an ego and just went about his business in a quiet and methodical way and embodied professionalism all the way throughout his career.”

These days, Shah is grateful for the support he has received from his parents while attempting to break a barrier as the first Indian player to play in Major League Baseball.

“I was lucky I had two parents’ not just for emotional support but financially,” Raul Shah described. “It’s very expensive for to travel and buy equipment, you’re getting paid peanuts. I would never be able to do this without to them.”

“I thought about it before, I wanted to be the first Indian player in Major League Baseball because Indian kids playing don’t necessarily have that role model.”

“The minute you have somebody, they say ‘this guy looks like me’ and say if he could do it I can do it too and it’s very special to be playing at a high level. I want to be the first to make that happen.”