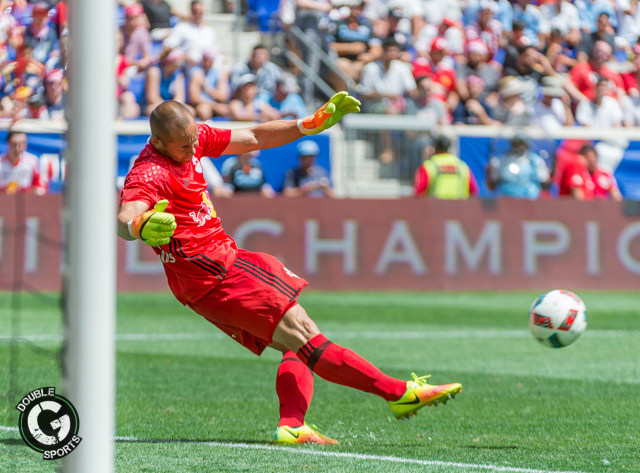 The New York Red Bulls headed to Los Angeles for their second straight away match in the league. Fresh off a 3-0 win in the CONCACAF Champions League over a physical Antigua GFC, they may have seen a different type of match coming. In some ways, Sunday night’s match was similar to that of the midweek matchup with Antigua GFC; it was a very physical affair in which more than one player left the match scathed. Yet, the match against the LA Galaxy saw a 2-2 draw dominated by controversial decisions from referee Hilario Grajeda, making it a highly entertaining night, but also a remarkably frustrating one for New York.

The starting lineup saw a few changes as Kemar Lawrence made his MLS return as Sal Zizzo took to the bench. Sean Davis, as expected, replaced the injured Dax McCarty, and Luis Robles’ injury concerns were short lived, as he made the start against the Galaxy.

The match was evenly split at first, with both chances having their fair share of possession and opportunities, but no goal came. A first violent moment of the match did, with Galaxy captain Robbie Keane going down after his head collided with Robles’ body. Keane had to receive treatment for several minutes and had a blood stained jersey, but despite the concussion concerns, Keane went on and finished out the match.

The controversial call to keep Keane on the pitch will likely be overshadowed by referee Grajeda’s decisions on the night, at first starting with a foul on the Red Bulls’ Damien Perrinelle. The defender was substituted for Aurélien Collin in the 30th minute after Jeff Larentowicz fouled him and went unpunished. Two minutes later, Connor Lade was taken off for Zizzo after an altercation with Giovani Dos Santos. The Galaxy came close to grabbing the first goal of the night when Dos Santos found himself feet from goal, but Ronald Zubar managed to stop the ball soon after it left the feet of the Mexican. The half ended with the Red Bulls two substitutions down, but level on goals with their opponent.

Despite the positive performance from New York in the first half, Marsch was clearly peeved with the decisions of the referee to let the Larentowicz tackle go unpunished. Telling Fox Sports’ Julie Stewart-Binks at halftime, he had “nothing to say,” either as in an attempt to escape a fine from the league for criticizing the referee too harshly, or saying so out of sheer disbelief.

Two minutes after halftime, the Red Bulls had to make another substitution, as Bradley Wright-Phillips had to come off after picking up an injury in the first half. Gonzalo Verón came on his place, and the Red Bulls were out of substitutions. New York was dealt a further injury concern in the 56th minute when Larentowicz committed a studs-up challenge on Lawrence, but Lawrence recovered and Larentowicz was allowed to continue playing with no punishment.

Finally, though, something came the Red Bulls’ way scored in the 69th minute. Sacha Kljestan sent a smart ball Verón’s way, and the Argentine darted into the penalty area, making it past multiple Galaxy defenders for the finish. This was a goal that the Red Bulls, depleted of resources, needed, and a goal that Verón himself needed, too, after underperforming in his first year as a Designated Player in New York.

The advantage was extended to two when Davis scored his first ever MLS goal in the 74th minute. Again, the play was started by Kljestan, who found Felipe on the edge of the penalty area. From there, Felipe sent it to Davis, who carved out space for himself to double the visitors’ lead.

The 2-0 deficit served as a wake up call to the Galaxy, who then took back control of the game. After many a missed shot, a ball came Mike Magee’s way, and the match was level with ten minutes to play. Momentum remained for Los Angeles, but the Red Bulls managed their own shots. In the 85th minute, Alex Muyl went charging into the penalty area, only for Galaxy goalkeeper Brian Rowe to take Muyl down. Penalty calls were shouted from the Red Bulls, but Grajeda offered nothing.

A minute before stoppage time, the Galaxy pounced on their momentum and found the equalizer through Ashley Cole, who scored with his left foot from close range. The Red Bulls, just like they had on six of the last seven road trips, had given up a lead. Despite the similar story, they had enough in them to try to grab the game winner. Verón found his way into the penalty area, again to be greeted by Rowe, who took him out in the same fashion he did with Muyl minutes earlier. The Red Bulls were angrier than before when Grajeda, who also missed a penalty call for the Galaxy in the first half, again ignored their calls for a penalty. Marsch, after spending all day running around his technical area shouting at the referee, was finally sent off, and the match ended with the even scoreline of 2-2.

The sentiments from the teams, though, were not equal. Speaking to Stewart-Binks after the match, Cole said “the ref done great today,” and was content with the efforts of his team while praising the opposition. Davis decided not to focus on the referee, but on his team’s performance. Also speaking to Stewart-Binks, he said “it hurts a lot right now, but I think we should be proud.” He also touched base on the fact that the Red Bulls had dropped a lead yet again. “We have to be able to hold onto leads,” he said “if we want to accomplish anything as a team.”

The Red Bulls next face the Montréal Impact at home on Saturday, August 13.