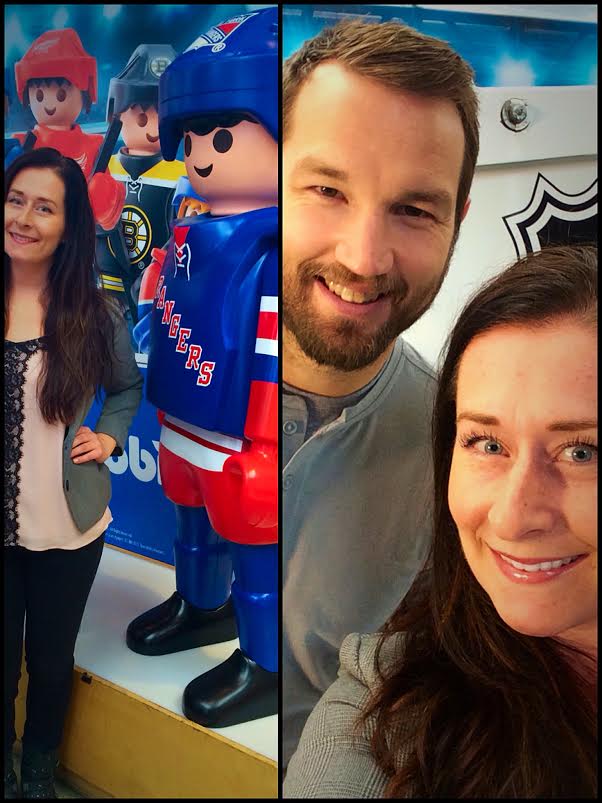 This past Thursday, October 1st, the NHL powered by Reebok Store released the brand new Original Six line of figures and playsets designed by PLAYMOBIL. This company is Germany’s largest toy manufacturer, distributing to over 100 countries. They have partnered with New York Rangers All-StarRick Nash and the NHL to unveil the line.

The event took place right outside the NHL Powered by Reebok Store, on the corner of 47th Street and Avenue of the Americas in NYC. All throughout the day, when a purchase was made of the PLAYMOBIL sets, fans got a wrist band to come back later in the day to meet and take a picture with Nash. As the clock approached 4:30PM, the line of fans contiued down the block, waiting as the rain started to pick up. As any hockey fan knows, though, a little mist is not going to stop them!

Nash is one of the more familiar names on the New York Rangers roster, and you don’t really see him taking partnerships with companies. He keeps to himself, so why now? Why with PLAYMOBIL?

“I don’t really do a lot of partnerships either, I kind of stay away from that stuff. I just felt like it was such a cool idea, and being a new dad, having a son, it was just a great company to partnership up with. As you grow with the times, everything’s by your cell phone, video games, and once I saw the product it was important for me to be part of it. I remember growing up playing table hockey, playing road hockey, you never see kids outside anymore playing interactive stuff,” Nash said.

Nash feels strongly about the importance of this product, but how can you dismiss the fact that just seven days from the event is the start of the 2015-2016 NHL season? You can’t.

The New York Rangers are coming off a President’s Trophy winning season, however falling short with a Game 7 loss on home ice in the Eastern Conference Finals. How do you bounce back after you gave your all? Athletes of all people are the ones to master this skill.

Nash gets it, “It’s something that we kind of have to take the good points, take momentum out of, but bury most of it. Just move on to a fresh season. One of our things in training camp was there are 30 teams that are trying to win a Stanley Cup right now. It doesn’t matter what we did last year. They don’t care. It’s just taking that approach to it and using some of the experiences from the last two years, and moving forward.”

As the season start approaches, we will see how well these guys can bury the past and charge in the present. A great partnership with PLAYMOBIL, a growing family, and the right attitude, Nash is ready.