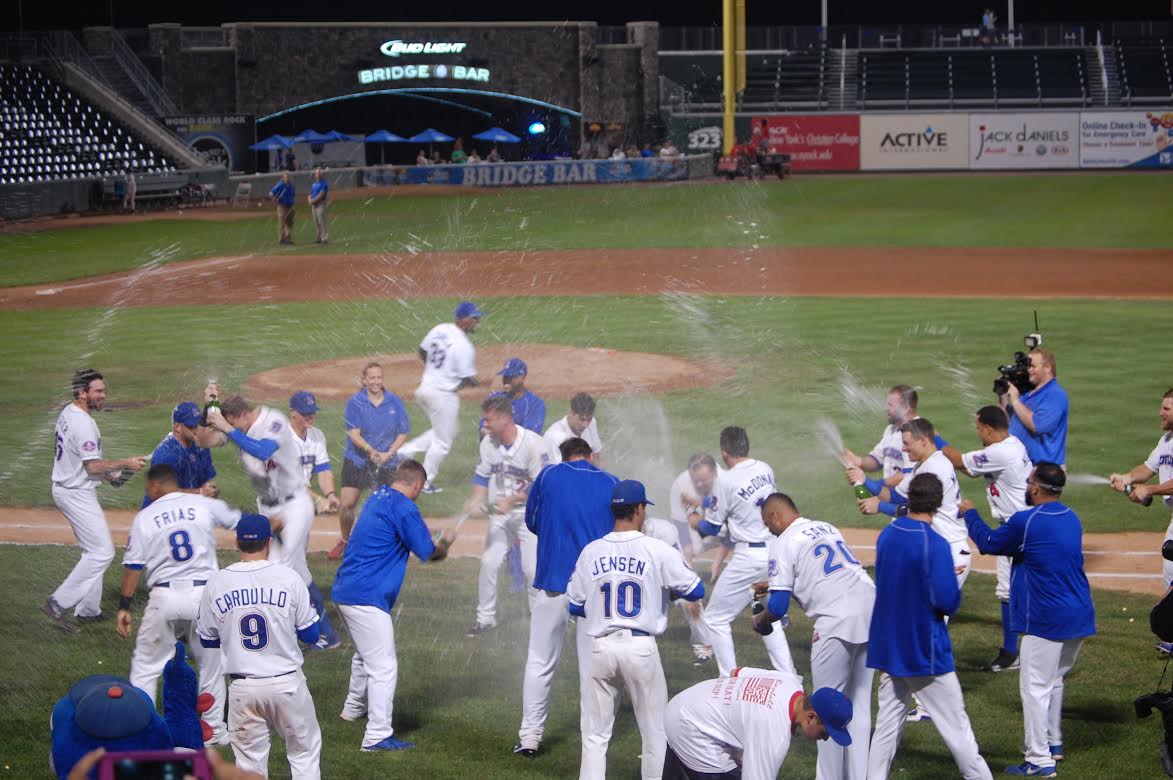 The Rockland Boulders split their second consecutive series in a row but that did not spoil the mood of the team in the 2nd game of their series against the Ottawa Champions at Provident Bank Park as the Boulders scored a franchise record 19 runs en route to clinching their 2nd straight Can-Am League Pennant and securing home-field advantage throughout the playoffs.

In the series opener, Rockland took a 4-1 lead in the 3rd as Stephen Cardullo laced a 2-run double down the right field line bringing in Jared McDonald and Junior Arrojo. Joe Maloney ripped a deep sac fly to center scoring Cardullo. McDonald would smoke his 8th home run of the season into the Short Porch area in RF in the 4th increasing the lead to 5-

However, Ottawa stormed back in the 5th with an RBI single from Mike Giarraputo. Mike Schwartz stepped up to the plate next and hammered a 2-run shot into the Short Porch section making it 5-4. Bryce Massanari made it back-to-back long balls depositing a blast onto the concourse in right field tying the game up at 5-5. The Champions went yard in the 6th as Corey Caswell bashed a solo homer into left field grandstand.

The Boulders bullpen kept it a run game with Daniel Carela striking out Massanari and Roberto Ramirez to end the Top 7th. Carela fanned two more batters in the 8th before giving way to Shawn Gilblair who struck out Sebastien Boucher to end the inning. Rockland had one last chance to tie the game up in the 9th with back-to-back single from Giuseppe Papaccio and McDonald. Junior Arrojo followed laying a sac bunt but Papaccio was thrown out at 3rd. Ottawa closer Alan DeRatt induced Stephen Cardullo into game ending 5-5-3 double play. Marcus Jensen(7-2) was charged with the loss going 6 1/3 innings allowing 6 runs on 10 hits while walking five and striking out three.

The Boulders wasted no time putting Game 2 of the series away scoring 7 times off Ottawa starter Nate Baker who just lasted 2/3 of an inning before departing with an injury. Rockland scores 3 times off bases loaded walks plus Junior Arrojo clubbed a 2-run single making it 7-0.

“Bo was in control from pitch one and got down in the zone” said Manager Jamie Keefe. “We’re up 7-0 after two innings and only had two hits,” added Keefe. “Having the guys know what’s on the line and it’s where we want to be” “Nobody was trying to attack as you have to let the game come to you sometimes”

Rockland padded the lead in the 3rd with Charlie Law raking a bases loaded clearing double into the left center gap making it 10-0. Marcus Nidiffer belted his Can-Am league leading 22nd home run of the season into left field grandstand making it 12-0.

“We saw the ball well and put it in play” said Marcus Nidiffer. “We took pitches we needed to and put guys on base” added Nidiffer. “Getting that early lead creates that comfortable approach”

Ottawa managed to get on the scoreboard in the 5th on a RBI single from Chris Winder and 2-run homer from Sebastien Boucher. Giuseppe Papaccio put the finishing touches on the scoring for the Boulders cranking a 2-run double to left field. Papaccio ended up going 2 for 4 with five runs driven in and scored once. Nidiffer went 3 for 4 with four runs driven in and scored four times. Pat Butler sealed the win striking out Winder to end the game. Bo Budkevics(5-4) earned the win giving up three runs on nine hits while striking out nine and walking two.

“Just feeling good and me and Bobby Jones have been working on the keep the ball down in the zone” said Bo Budkevics. “The fastball, curve ball and working on a little cutter plus two-seam have produced good results” added Budkevics. “We have the best infield in the league”

“It was really just about staying in the moment and the first at bat felt good,” said Giuseppe Papaccio “You just take it one at bat at a time with the score getting out hand” added Papaccio.

The Champions took an early 1-0 lead in the 1st in game 3 of the series as Rockland starter Alex Gouin uncorked a wild pitch allowing Sebastien Boucher to score from 3rd. Rockland quickly tied the game up in the bottom half of the frame as Joe Maloney clubbed an RBI single to left bringing in Junior Arrojo.

In the top 4th Jared McDonald made a highlight reel catch that ended up at number 7 on Sportscenter’s Top 10 plays of the night racing towards the left center gap making a full leaping extension grab on a bullet drive off the bat of Bryce Massanari. Ottawa did grab the lead in the 5th on two errors committed by Boulders second baseman Steve Nyisztor.

Gouin worked out of a bases loaded jam in the 6th inning striking out Daniel Grauer and Joe Maloney made a heads up on a deep fly ball caught at the warning track in left by throwing out Massanari out at 3rd before Mike Schwartz crossed home plate. The Boulders tied the game up at 2-2 in the 6th on a RBI single from Stephen Cardullo bringing in Junior Arrojo for Rockland’s 593rd run of the season that set the Can-Am league season record for most runs scored by a team.

With bases loaded, Ryan Stovall back with the Boulders after taking time off to attend school and coach grounded a ball to 1st base which was bobbled by Massanari and ended up firing home but as Ottawa’s catcher Grauer went to make the tag the ball skipped by allowing 2 runs to score as the Boulders took the lead for the 1st time. Nyisztor atoned for his errors lining a single to left scoring Charlie Law making it 5-2. Giuseppe Papaccio ripped a single plating Stovall pushing the lead to 6-2

“Jamie understood I had to take care of some things at home and the whole team has been so supportive of me coming back,” said Ryan Stovall. “The team is the same and we have all the pieces we had last year to make a championship team which Jamie has molded together” added Stovall.

The Boulders made more history in the 7th as Stovall crushed a double over Champions centerfielder Boucher bringing in Maloney who scored his 88th run of the season, breaking the Can-Am League record for most runs scored in a season by a player. Jared McDonald’s streak of reaching base safely was in jeopardy but in his last at bat of the game McDonald singled to right keeping the record intact and in the process setting a Rockland Boulders record with his 121st hit of the season. Alex Gouin(8-4) registered the victory surrendering two runs on seven hits while striking out five and walking one.  Manager Jamie Keefe earned his 600th career win.

“It’s a good feeling as it’s a number to me and that I have been doing it for awhile” said Manager Jamie Keefe. “It’s about what these guys have done through 93 games,” added Keefe. “What’s more impressive is having 60 wins and team batting average is .290.

“One of those nights you have to scrap for a win and did not have my A game but felt good to count on my teammates to boost my confidence” said Alex Gouin. “All year the pitchers’ have said our savior has been the offense but tonight it was the defense” added Gouin.

In the rubber match of the series, Ottawa relied on the long ball to sprint out to a lead. Mike Schwartz blasted a 2-run home run into the right center grandstand off Boulders starter Richard Salazar in the 4th. Nick Giarraputo smacked a 2-run jack into the left field grandstand in the 6th making it 4-0.

Champions starting pitcher Wilmer Font stymied Rockland most of the game allowing two singles through the first six innings. Steve Nyisztor changed things bashing a drive over Schwartz in left bringing in Ryan Stovall from 1st. After Nyisztor advanced to 3rd on a ground out by Giuseppe Papaccio, new Ottawa pitcher Josh Blanco uncorked a wild pitch allowing Nyisztor to score. The Boulders had runners on 1st and 2nd with 1 out but Blanco got Stephen Cardullo to ground out to 2nd and struck out Joe Maloney.

Rockland had another great scoring chance in the 8th with runners on 1st and 2nd and no outs but Ottawa relief pitcher Drew Cisco fanned Stovall and induced Nyisztor into an inning ending double play. In the 9th Jared McDonald ripped a 1 out single and Junior Arrojo reached on an infield bunt single. Champions closer Alan DeRatt shut the door getting Cradullo to fly out and striking out Maloney. Richard Salazar(11-4 was tagged with the loss yielding four runs on six hits, striking out three and walking two in six innings of work.  The Boulders set a season attendance record at Provident Bank Park with 161,796.