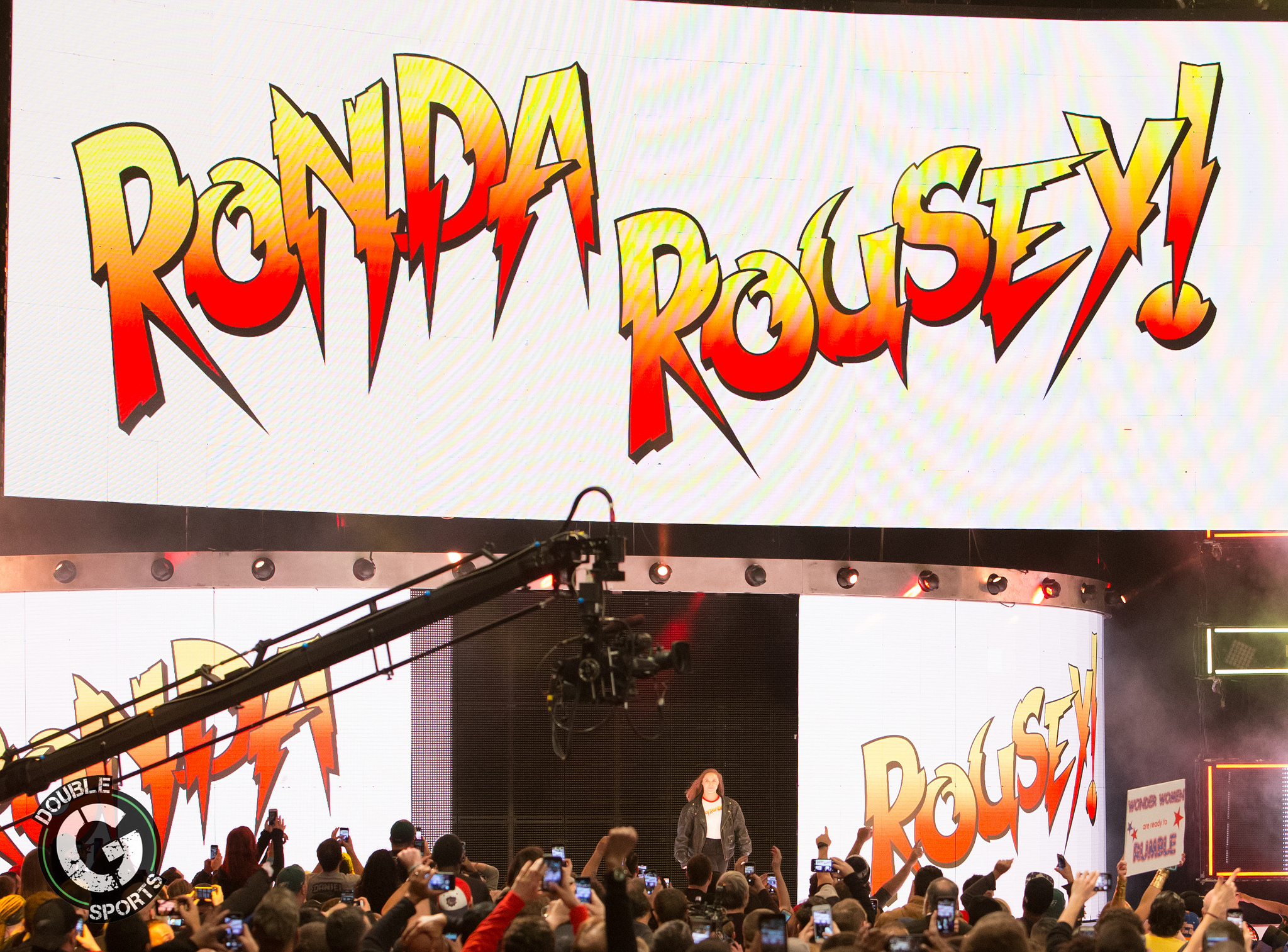 WWE had the right idea with the women’s Royal Rumble, but did Rousey’s appearance ruin the moment?

In case you missed it, Ronda Rousey officially made her WWE debut at the 2018 Royal Rumble. After Asuka won the women’s Royal Rumble, the fans went wild after Rousey appeared on stage. She wore a Roddy Piper-inspired shirt and even had Hot Rod’s jacket. She went into the ring, pointed at the WrestleMania sign, and that’s all she wrote. While she didn’t compete in the actual match, she indeed made an impact.

Was her introduction to the world of pro wrestling booked right? While a cool moment to remember, the debut of Ronda Rousey was poorly executed. For months, rumors of Rousey to WWE were everywhere. Not competing in the first Women’s Royal Rumble match is a move that worked to swerve fans. What happened after erases all of that. She could have appeared on the next episode of Raw, which after a big PPV like the Rumble is always a great show. She could have even showed up at the Elimination Chamber PPV in February. Even if Ronda appeared in the audience and did something after, it would make sense. It’s the way she debuted that is in question. There is a time and a place for everything, and WWE chose a specific part of the Royal Rumble PPV for her to debut in. It’s a celebrated and controversial moment.

WWE heavily promoted the women’s Royal Rumble as a game-changing moment. For about an hour, some of the best women wrestlers in the world gave it their all. The moment Asuka won, it was special. Her choosing her opponent in Alexa Bliss or Charlotte Flair would have been special. Her moment was ruined after “Bad Reputation” blared through the speakers of the Wells Fargo Center. As a result, she became an afterthought to Rousey. For now.

There are others who would agree:

The damage is done. At the end of the day, Asuka will get her big match. Against who is an interesting question. One that wrestling fans will be on the edge of their seat to find out.

A positive: To make it clear, Ronda Rousey in WWE is a great move for the company. This is especially true if both parties are fully committed. The promotional value she brings to the company will be off the charts. The former UFC Women’s Bantamweight Champion has wanted to do this her entire life. She seems very passionate about it, and has reportedly been training for months.

Her moment may have overshadowed another’s, but that’s how the cookie crumbles in the pro wrestling world. Nobody will forget the name Asuka, but the end of the PPV does put a sour taste in the mouth. Given that Ronda rarely spoke to the media after her losses to Holly Holm and Amanda Nunes, it will be interesting to see how she handles a pro wrestling atmosphere. One that is very vocal. There will be those that criticize her debut, if only for a moment. She has a chance to win them all back. It all depends on what she does next. Rousey’s first match, whoever it will be against, will be must-watch for a variety of reasons. One being the impact she can or can’t bring to the squared circle. That is a test all wrestlers go through at some point.

Could WWE have found a way to do it differently? It looks like we’ll never know. For now, Ronda will have a chance to prove the angle wasn’t a mistake. The next few months of WWE TV should be very entertaining. Can she handle the pressure?

Sound off folks! What did you think about Ronda Rousey’s WWE debut?