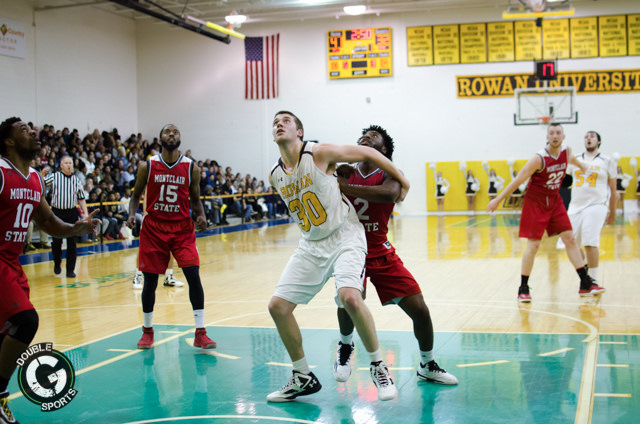 On Tuesday evening, it was made very clear that Rowan University came to play. The Profs defeated Montclair State University, 95-86, in the NJAC Men’s Basketball Semifinals.

On Friday February 22nd at 7pm, second seeded  Rowan will travel to New Jersey City University for the championship game.

Guard/Forward, Ramon Wright, led the Mens basketball team into having a career high 27 points. Wright, is Player of the Year. Needless to say he had five rebounds, three assists, three steals and not to mention two blocks.

Lets not forget about Guard DaRon Curry, who posted 23 points on the board.

For Montclair State, Guard Akbar Hoffman posted 21 points. Powerhouse Irving Callender IV had 10 rebounds and 20 points. Did I forget to mention a double-double?

The last minute on the clock was the most intense of the game. Going back and fourth, Montclair was not giving up without a fight.

With about two minutes left on the clock, Kearney gave an amazing layup giving Rowan a 13 point advantage.

Lets see what the next spot holds for Rowan vs. NJCU.