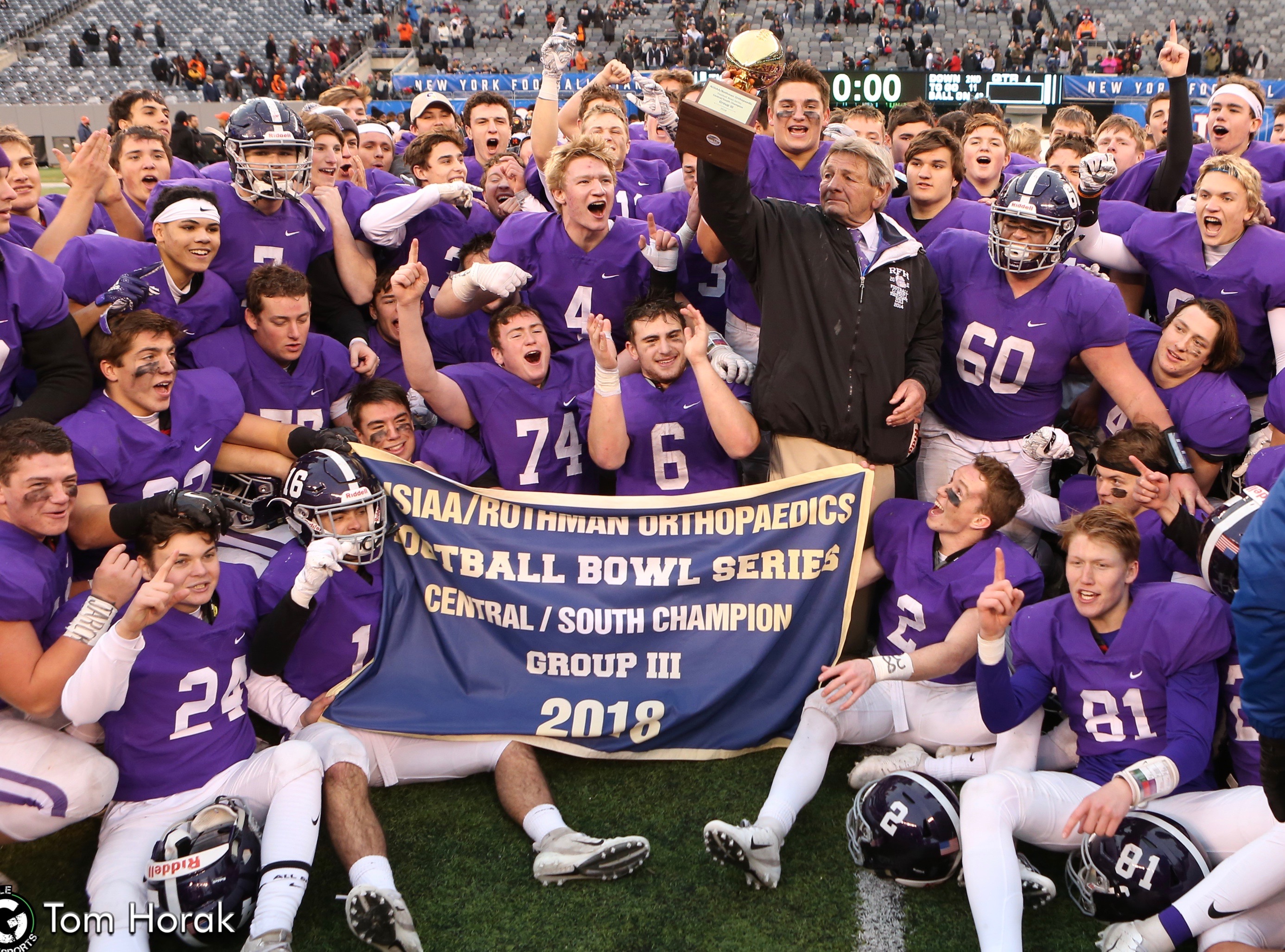 There was no surprise Rumson Fair-Haven(10-2) relied on heavily on senior running back Alex Maldijan in the South Group 3 Bowl Championship Game against Woodrow Wilson(9-4) on Saturday at Met Life Stadium. Lugging the ball 38 times for 204 yards, Maldijan made his presence known early on tying the game up at 6-6 with a 53-yard touchdown run with three minutes remaining in the first quarter.

“It was amazing, when you have all senior offensive line that can move people like that it’s a dream for a running back and just to be able to run behind those big guys and make it down the field a rush, said Alex Maldijan. You don’t get tired when you are not being grabbed at the line of scrimmage and getting four yards every time”

Meanwhile the Bulldogs defense did a great job stopping the Tigers offense from putting up more points led linebacker Keegan Woods intercepting a pass by quarterback Nick Kargman and knocking the ball out of hands of running back Muheem McCargo enabling defensive back Drew Frankel to pounce on the ball with Woodrow Wilson in position to score at the two-yard line.

In the third quarter, the Bulldogs defense rose to the occasion once again stopping the Tigers short of the first down marker. The offense went to work with the bulk of carries going to Maldijan in a 11-play 57-yard drive that resulted in quarterback Collin Coles rolling out of the pocket on fourth and goal at the three and firing a bullet to Ian O’Connor in the back corner of the right end zone with less than six minutes left in the period. However, the two-point conversion failed.

Woodrow Wilson displayed no jitters at all as Kargman quickly connected with wide receiver Naiem Simmons(4 catches for 97 yards) on a 29-yard pass play. After two straight incomplete passes, Kargman hooked up with Simmons on a 32-yard touchdown run in the back of the end zone 31 seconds later. The Achilles heel for both teams’ on this day was the inability to kick an extra point. Going for the two points, the conversion pass failed.

The wild sequence of events continued as the Bulldogs went on another extended drive this time churning out a 12-play, 60-yard drive chewing up 5:47 of the clock between the end of the third quarter into the final period with John Volker on a seven yard end run barreling into the end zone. A familiar theme manifested as the two-point conversion was no good.

Not fazed by the deficit, Kargman orchestrated a quick and efficient drive of his own, 12-plays 80 yards including gaining 10 yards on a fourth down and seven from the Tigers 48. On second and goal from the nine-yard line, Kargman lofted up a pass in the left corner of the end zone as wide receiver Stanley King(5 catches for 53 yards) reeled in the catch.

Despite only completing four of 5 passes for 50 yards, Coles made it when it counted. Backed into a third and eight at the Bulldogs 34, Coles launched a 29-yard pass that placed ball at the Woodrow Wilson 34. With Maldijan running the ball four consecutive times, Coles changed it up in a dramatic way slinging a 21-yard pass to wide receiver Jackson McCarthy who shook off tacklers and darting into the end zone with 1:15 left. Maldijan broke the two-point curse busting through the end zone untouched.

With the Tigers having one last crack at tying the contest up, the Bulldogs defense clamped down sacking Kargman once and forcing a bunch of turnovers to seal the 26-18 victory. Kargman completed 19 of 30 passes for 278 yards.

“It’s very stressful in a situation like that, we kept our heads forward and focused and knew we were going to get the job done, Maldijan said. It’s the best of the best and really proud of ourselves”

Rumson Fair-Haven Head Coach Jerry Schulte on the win, “It’s a great feeling when you win any game and very pleased with it. At halftime we told the team you have 24 minutes left as a team, it’s done and how do you want to be remembered and this is how they answered. Our defensive staff had a great game coming in, we knew they were going to score and not shut them out but did what we had to do. We have a high bar at Rumson Fair-Haven, raises it a little bit more and keep it going”