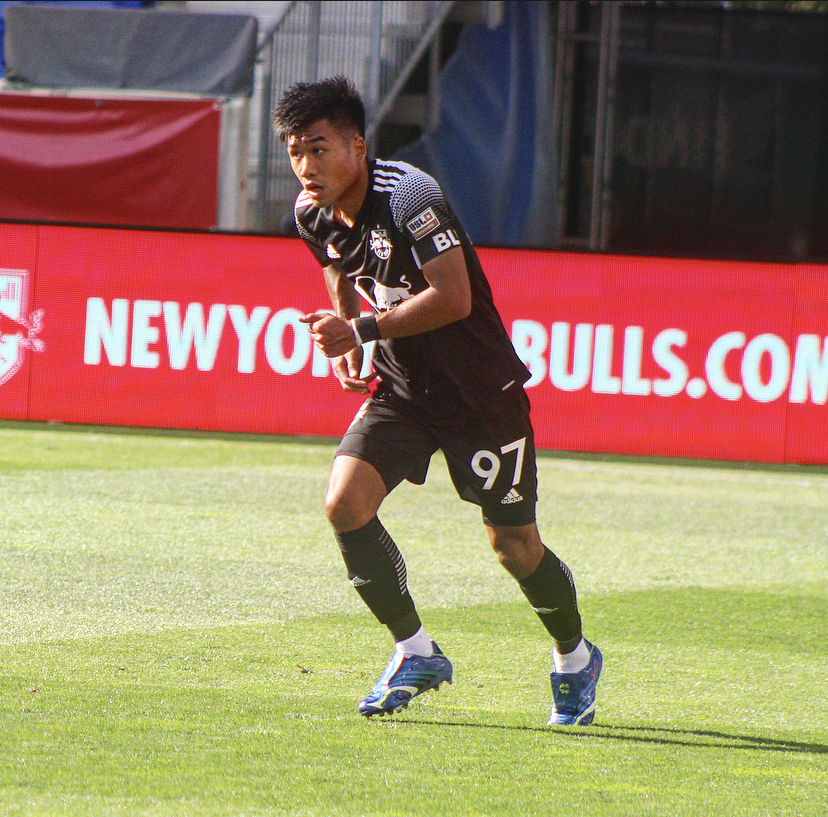 Throughout his soccer career, Samad Bounthong of the Red Bulls II has moved 2,805 miles from home and triumphed over his challenges. One of the biggest challenges that Bounthong experienced started when he was cut from the Seattle Sounders U-16 Academy team about five years ago.

It was a wake-up call for the 16-year-old from Seattle, however, instead of moping about it, the man who would later garner the nickname “Super Samad” committed himself to improving his game.

Samad took that advice and trained, often alone, at his high school.

“I wrote down what he said that I needed to work on and that was what I worked on the whole summer…I was taking football drills [and] I was using that just to get faster.”

With that training came creativity:

“I felt like I wasn’t on a team so I didn’t have a coach to tell me [how to train], so I had to just be creative and get on YouTube and see what kind of drills people were using to get faster and better at soccer.”

Samad Bounthong was born and raised in Seattle, Washington. He played his youth soccer on the west coast. Then, shortly after being cut from the Sounders’ academy team, an opportunity to live somewhere else arose.

His dad “happened to be moving to New Jersey”, which made him decided to give the Red Bulls “a try.” Soon after he moved to New Jersey, Samad tried out for the New York Red Bulls’ academy.

It turned out well, as Samad ended up becoming a starter on the Red Bulls’ “prestigious U-18 team that entered the academy playoffs as the number-one overall team in the country in 2015.

In less than a year, Samad rebounded from being cut by the Sounders and made it into the Red Bulls academy. After graduating from high school, he did not receive the offers he was looking for from colleges. Then, a friend told him that Marist College in Poughkeepsie, New York had shown interest Samad.

Getting Back on Track

According to the Marist College Athletics website, Samad Bounthong “defined Marist soccer” during the four years he played for the Red Foxes. Bounthong only missed two total games in four years, starting 71 out of 72 matches. He also earned first-team All-MAAC honors after his junior and senior years.

In our interview, Samad described what his collegiate career meant to him personally and in terms of his dreams of becoming a professional.

“After sophomore year, I started taking things way more seriously. [I] stopped going out as much, started training extra. So my junior year, I got first team All-Conference. I had the most goals on my team. My college career was a big deal for me.”

Marist also nominated Bounthong for “Sportsperson of the Year” in 2020.The qualities that he showed while playing for Marist and the things he accomplished personally, as well as what his team accomplished, have left an indelible mark of success at Marist.

The Lifestyle of a Red Bull

Samad Bounthong signed his first professional contract with the Red Bulls II on Mar. 5, 2020. Since becoming a part of the team, he’s played seven matches, primarily at left-back. Being that he was an attacking midfielder in college, Bounthong has been putting a lot of energy into making that transition, which he’s relied on his coaches to help him accomplish,

“[My coaches] were super-open to helping me and teaching me a whole new position, which takes a lot of work and time, but everyone was willing to help me. I think the staff has been super great to me and I’m super grateful to them.”

However, perhaps the most interesting part of our conversation was when Samad described living with his teammates.

“For the most part, everyone’s hanging out with each other. We’ll get a couple FIFA games in. I think my house [does] pretty good job of interacting with each other, as all the other houses do.”

He went on to explain that while the USL soccer season was still suspended, he encountered challenges he had to get through. He described how the COVID-19 break was key in helping him find ways to improve his training regimen.

“Once I knew that we we’re going to have a couple months off, it was just try and find something to do. Our coach talks about getting better everyday… It just helped me become a little bit more creative. I didn’t know that I could get a full lift in with no real weights, so now there’s no excuse for getting better.”