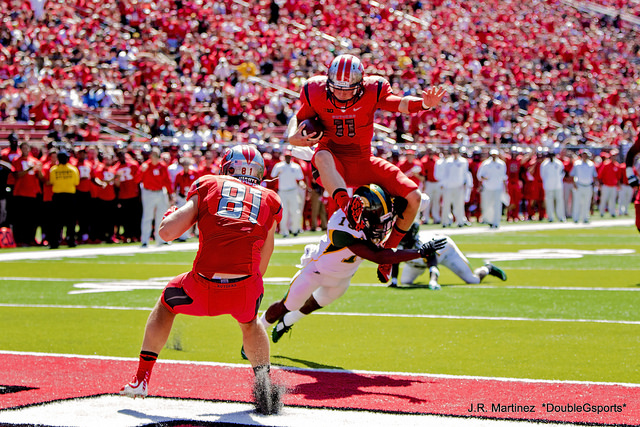 Five players were arrested Thursday, including four who played in the secondary. Those players were immediately suspended by Athletic Director Julie Hermann. According to a press release given out about 10 minutes before Rutgers kicked of their season against Norfolk State, the five players (Nadir Barnwell, Ruhaan Peele, Delon Stephenson, Andre Boggs, and Razohnn Gross) were dismissed from the team.

Then, Rutgers (1-0) started an extremely young secondary with the top four cornerbacks all making their collegiate debut. True freshman Blessuan Austin and redshirt freshman Isaiah Wharton got the start as they were backed up by true freshmen Jarius Adams and Ronnie James. Norfolk State (0-1) easily passed their way down the field in 97 seconds on their opening drive to wide open receivers for a 7-0 lead.

However, the Scarlet Knights did what they should do against lower level Division I-AA competition in front of 47,453. Fighting off early game jitters and distractions, the Knights pummeled the Spartans for a 63-13 victory. 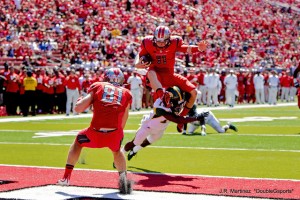 Redshirt sophomore Hayden Rettig got the start at quarterback over classmate Chris Laviano who was suspended for the first half due to a previous missed curfew and use of a fake ID. On the ensuing drive, Rettig guided the team down the field completing a pair of firsts. He threw his first completion to wide receiver Andre Patton and scored his first passing touchdown to tight end Matt Flanagan to tie the game at seven. Rettig also added a rushing touchdown in the second quarter to put Rutgers up 14-7.

The Los Angeles, Ca. native showed no rust playing his first live game action since starring for Cathedral High School in 2012. The 6-3, 210-pounder finished 9-11 passing for 110 yards, but Laviano still entered the game in the second half. 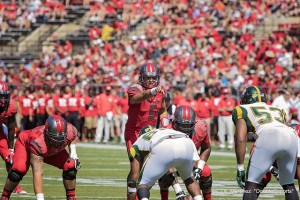 The Glen Head, N.Y. native might have stolen the show despite missing the first 30 minutes. In a span of less than eight minutes in the third quarter, Laviano connected on three touchdown passes with star wide receiver Leonte Carroo, who was also suspended for the first half. On the first score, Carroo ran down the left side line toward the student section, adjusted on a slightly underthrown ball, kept his balance, and walked into the endzone. Carroo now holds the Rutgers record for most touchdown receptions with 22, passing both Tim Brown and Brandon Coleman who had 20. Laviano finished 4-4 passing for 138 yards.

After the game, Flood was asked why he took out Rettig, if the insertion of Laviano in the second half means he would have been the starter if not for his mishap and if there is a possibility of playing both quarterbacks.

“It wasn’t a matter of pulling Rettig,” Flood said. “I thought Hayden played well in the first half and we had an opportunity to get a live evaluation in a game environment on both quarterbacks, and I wanted to do that. We’re still gathering information. I’m really pleased with the way both those guys are playing. They are certainly not making it easy on me. Both played at a high level and we’ll go back and we’ll watch the film and decide here what direction we’re going to go as we move forward.

“…I just talked to Coach (Al) Groh on my way up here and I said this to him. He was sharing a story about a situation that he had when he was the head coach at Virginia. I said: In all my years, I don’t know if I remember a situation like this where both quarterbacks were both doing a really nice job and playing at a high level and the decision part of this has become a much longer process than I anticipated. When I said seven to ten days in the off-season, I believed it would be seven to ten days and somebody would separate themselves and we would have a starting quarterback and we would go forward. This is a little bit of unchartered water for me.

“But what I don’t want to do is just make a decision to make a decision or just choose one quarterback because that’s what I’ve done in the past and that’s what I’ve been more comfortable with. What I want to do is whatever is best for this football team to be 1-0 each week, so I think I’m going to have to be open to that as we go through the season.”

On the ground, the running backs played in a rotation, as redshirt senior Paul James, sophomores Josh Hicks and Robert Martin, and junior Justin Goodwin all split carries. James got the start but Hicks led the way with 18 carries for 118 yards and two touchdowns, including one as he fought off a tackle and spun to make the closing defender miss the Palmetto, Fla. Native completely.

Despite the shaky defensive backfield, the front seven looked like the Great Wall of China. On 23 rushes, the Spartans finished the game with minus three rushing.

Rutgers junior kick returner/wide receiver Janarion Grant returned the second half opening kickoff 80-yards for a touchdown, and every time Grant touches the ball, Flood said he can change the outcome of a game.

“He’s a special guy,” the fourth-year head coach said. “Janarion is a special guy. You saw it in the past and you certainly saw it today when he took the opening kickoff back and he’s one of those players that every time he touches the ball, he’s got an opportunity to score. And those guys are special and he did it again today on special teams and he’s going to have a big role as a wide receiver for us, as well.”

Next Saturday, Washington State and their pass-heavy offense comes to High Point Solutions Stadium for a 3:30 p.m. start.

Laviano vs. Rettig: Who has the Edge on Competition for Starting Rutgers’ Quarterback?
Defense Shuts Down Run, Passing Attack In WSU On The Horizon