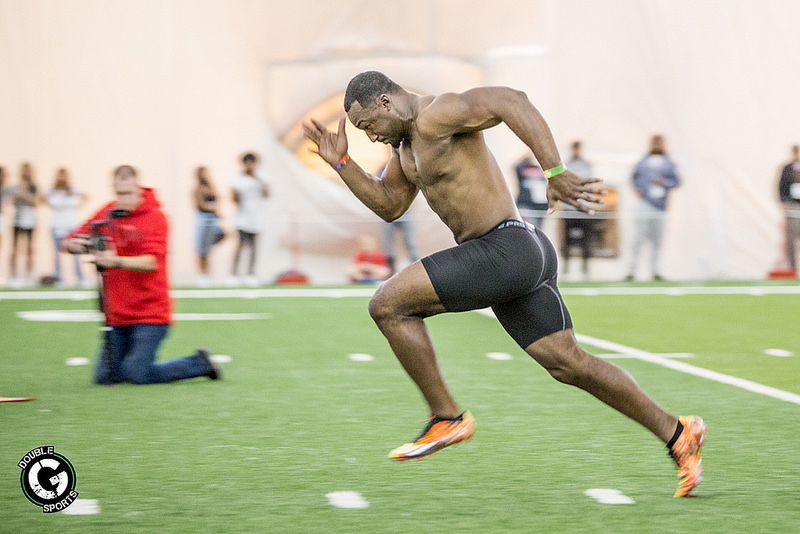 Rutgers Pro Day: Who else shined in front of NFL scouts? 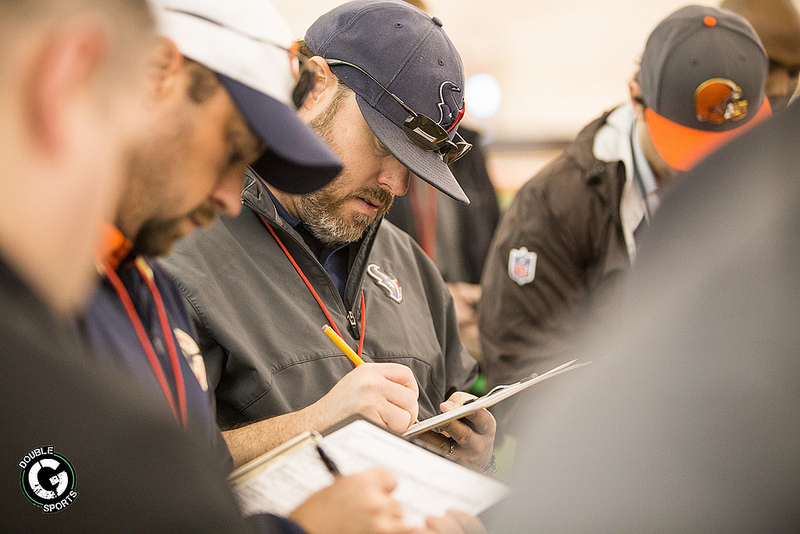 The biggest prize inside the Indoor Practice Bubble at Rutgers University Wednesday was wide receiver Leonte Carroo. The 6-foot, 211-pound star was dressed in street clothes and didn’t participate, but supported his teammates while they did tests and drills for scouts from 28 NFL organizations during their Pro Day.

We already touched on the strong performances by the latest three starting linebackers for the Scarlet Knights, including Quentin Gause’s strong day. If he had went to the NFL Scouting Combine in February, Gause would have been third among linebackers at the in the bench press (23 reps), third in the 20-yard shuttle (4.15 seconds), fourth in the three-cone drill (7.00 seconds), and fifth in the vertical jump (36 inches).

But, it was a former Scarlet Knight who transferred to Northern Iowa for his last season of eligibility who had the best day. 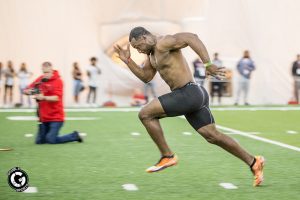 Huggins would have tied for eighth in the bench press at the Combine, eighth in the vertical jump, and tied for fifth in the broad jump. The muscular St. Peter’s Prep product showed explosiveness.

Despite not living up to all the hype as the savior of Rutgers football when he came to Piscataway as the No. 1 recruit in New Jersey coming out of high school in 2011, he is better than the 51st ranked running back eligible for this year’s NFL Draft according to cbssports.com.

“Before I even got here, I already had the mentality that I was going to crush this from the weight room to weigh-ins,” Huggins told the media. “When I came in this bubble, I was already locked in. I already had one goal and I wanted to go out there and I wanted to smash it. I feel like I did that today.”

Huggins only accumulated 1,058 rushing yards and 11 touchdowns on 320 carries on the ground in his four years, but the redshirt senior is fresh.

“I’ve got a lot more football left in me,” Huggins said. “This is the beginning. This is my coming out party. I feel like the opportunities weren’t there for me at certain places, but I can’t dwell on that. I can only control what I can control.”

Giant 6-foot-7, 320-pound offensive lineman Keith Lumpkin used his Combine snub as motivation and fuel coming into Wednesday’s workout, and despite a groin tweak which kept him out of the 40-yard dash which scouts wanted to see, Huggins’ former Rutgers and St. Peter’s Prep teammate was satisfied with his workouts.

“I felt that I had a good day out here, did what I could do,” said Lumpkin, a 38-straight game starter the past three seasons at left tackle. “I had a bump in the road last week, got it right and I feel better than I did before. I’m feeling very optimistic. I feel like i had a great day and I definitely opened some eyes with these scouts that were out here.” 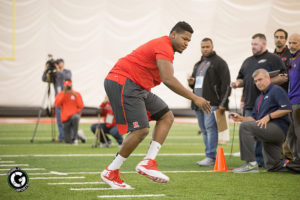 Lumpkin said he will likely do the 40-yard dash and re-do the bench press after he produced 23 reps on March 31 when Carroo holds his own private Pro Day-like workout for NFL teams.

Lumpkin is underrated as the No. 38-ranked offensive tackle in the draft according to cbssports.com.

Contrary to the aforementioned Huggins, Lumpkin, and the trio of linebackers, running back Paul James and defensive lineman Djwany Mera didn’t have great showings.

The oft-injured James posted a disappointing 4.73 40-yard dash, and only had four bench press reps. James again suffered minor ailments to his pecs and hamstrings which factored into his results. Only fullback Sam Bergen and Huggins participated in the running back field drills.

Mera, a three-year starter/major contributor for the Scarlet Knights recorded the slowest 40-time at 5.41 seconds, 3-cone drill (8.00 seconds), 20-yard shuttle (4.80), and only managed 17 reps on the bench reps. All those numbers would be near the bottom of the list when comparing to other defensive linemen from the Combine.