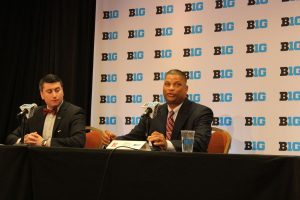 With its first two games in the books as victories, the Rutgers men’s basketball team will be in for its first real test of the 2015-2016 season tonight.

As one of eight games being played over a four-day span, both of these teams head into tonight’s contest in a similar position.

Both the Knights and the Red Storm are in the midst of a rebuilding process with head coaches who played at each respective school some 30 years ago.

Rutgers head coach Eddie Jordan is in his third year in Piscataway, coaching a team that is finally made up of players he recruited. Meanwhile, St. John’s head coach Chris Mullin is starting his first season as head coach of his alma mater.

Although both the Knights and Red Storm started the season 2-0, each team has offered little indication of what their current rosters will bring this season.

Rutgers has shown it will rely on freshman guard Corey Sanders to do the heavy lifting on offense, as he assumed point guard duties in his first collegiate game against Howard. Sanders notched 15 points and five assists in the contest, and orchestrated an effective inside-out game with forward Deshawn Freeman.

But the offense struggled at times.

The Knights registered 20 turnovers against Howard, and shot an abysmal 2-14 from three-point range. Rutgers has committed 20 turnovers in both of its games this season, a number that will need to decrease in order to remain competitive against tougher competition such as St. John’s.

Much like the Scarlet Knights, the Red Storm enters this game with little certainty of what to expect.   St. John’s got off to a rocky start with an exhibition loss to St. Thomas Aquinas prior to the season, but have been 2-0 in games that count so far. Its offense has had trouble with coughing up the ball as well. The Red Storm have committed 32 turnovers in 80 minutes of play thus far, compared to The Knights’ 40 turnovers.

One of the keys to this game will be which team fares better from behind the three-point line.

As one of the most prominent three-point shooter of all time, Mullin already has the Red Storm utilizing the long ball in their first two games. St. John’s is shooting 41 percent from behind the arc and has made 16 three-pointers already.

Rutgers has made two three-point shots this season. If the Knights can get hot from long distance, expect this game to go down to the wire.

Both St. John’s and Rutgers are looking to make an early statement about the legitimacy of its respective team in the early going of the season.

Even though the season is a week old, a win tonight could fuel the start of a something more for each team’s nonconference schedule.

The Game: Yale and Harvard Square Off on Gridiron in 132nd Meeting
Despite Slow Start, St. John’s Pulls Out Close Win Over Rutgers