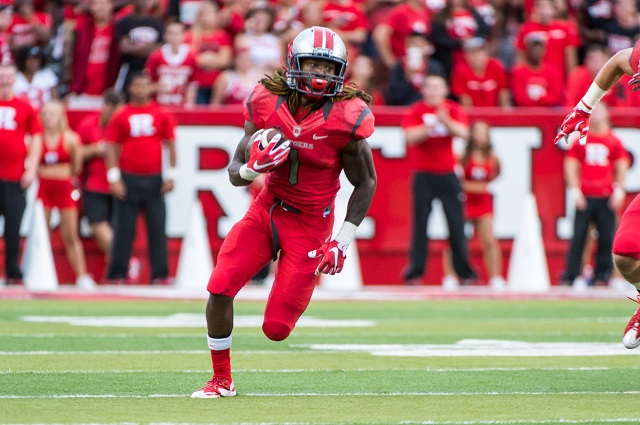 Uncertainty has followed Janarion Grant since he suffered a broken ankle on September 24, 2016. There was uncertainty of if Grant would enter the NFL Draft or return to Rutgers for a final year of eligibility. When he finally announced he would be returning, the uncertainty was if the speedster would be fully healthy for training camp.

After arriving at Big Ten Media Day on Monday, Rutgers head coach Chris Ash announced the Scarlet Knights top playmaker is 100 percent healthy. If you heard an exhale, it’s like from Rutgers fans across the country. The news was a welcome relief.

There is no debating the fact, Janarion Grant changes the game. He is easily Rutgers biggest threat every time he touches the football, something Ash and the rest of the staff knows must happen often.

The Scarlet Knights were 2-1 and tied with Iowa late in the first half of the Big Ten opener last season before Grant suffered the season ending injury. At that time, Grant had already had a hand in six touchdowns — three rushing, two on special teams and one throwing an option pass. With Grant out, the Rutgers offense went missing and the Scarlet Knights lost nine straight games. They simply had no replacement.

Rutgers offense should be much improved this season, and Grant’s return is no small addition. The Scarlet Knights brought in transfers and incoming freshman that will compete for starting jobs and playing time off the bench.

The hope is Grant can see a lesser workload while continuing to utilize his versatility. Grant has a chance to have a record breaking season.

Entering the season, Grant is tied for first in FBS history with eight career combined kick return touchdowns. He is currently fourth in school history – behind only Ray Rice, Terrell Willis and Brian Leonard – with 4,251 all-purpose yards. Grant would need to appear in all 12 regular season games this season, but if he does, he would become Rutgers all-time leader in games played, too.

Grant was limited during training camp and did not play in the annual Scarlet-White Spring Game, in hopes of being fully ready for training camp. Rutgers opens the season Sept. 1 against Washington at home at High Point Solutions Stadium.