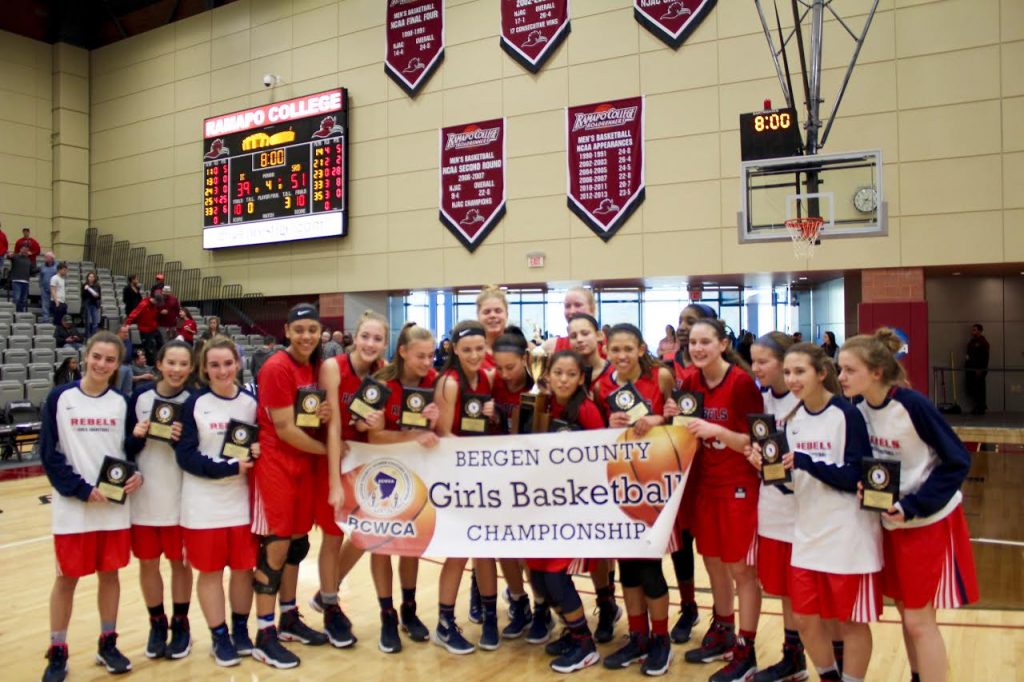 Saddle River Day sophomore Michelle Sidor reminded everyone on Sunday at the Bradley Center (Ramapo College of New Jersey) that last year’s remarkable performance in the Bergen County Girls Basketball Tournament & Final against Immaculate Conception where Sidor tallied 105 total points and 34 in the championship game was no fluke.

Sidor put on an offensive display, scoring a game-high 28 points leading the Rebels (19-5) to a 51-39 victory over the Blue Wolves (18-5) and second consecutive tournament title. Heading into Sunday’s final, the Rebels average margin of victory in the Bergen County Tournament was 24 points. Saddle River Day did not allow an opponent above 40 points in all three games. In last season’s championship game, Saddle River Day held Immaculate Conception to 36 points.

“I want two more and be the first team to go four in a row and so happy because we brought it today,” said Sidor. “I had to stay composed and my teammates were doing a lot for the team. I wasn’t forcing and taking what I was getting. My teammates rose to the occasion in the third quarter when I was not scoring.”

“Everyone rebounded really well and our defense was awesome. The subs came in whether it be 6th or 7th man and played outstanding. We had a fire under us and knew they would be coming out physical today but we kept our composure and pulled away.”

“One of our goals was back-to-back and means a whole different level of respect and what we built at Saddle River and so proud,” Head Coach Danny Brown explained. “We worked on this going back about 2 weeks ago playing a solid man-to-man like that and after talking with the kids and looking at the tape we all decided it was our best shot and really matching up man-to-man and shutting down some really great outside shooters instead of jumping in and out from the zone. They did an unbelievable job and nailed it.”

“Because of their age , they are really going to buy into it, talking a lot more and communicating on defense. They all bought in and to hold these guys to that many points and shooters in single digits is incredible. I knew with our speed we could stay with anyone.”

Leading 8-5 after the first quarter behind two trifecta’s from Sidor, the Rebels extended the lead to 14-7 with a 6-0 run. The margin would grow to 20-8 with 2:47 remaining on a trey from junior guard Carolyn Carrera. Saddle River’s tenacious defense interior defense cut off any opportunities of Immaculate Conception scoring in the paint. The Rebels capitalized on second chance opportunities by dominated the offensive glass.

Coming out of the locker room with a 24-12 lead, the Rebels boosted the lead to 33-15 on Sidor’s 4th three-pointer of the game. Turnovers continued to plague the Blue Wolves in the third quarter. Senior guard Breyenne Bellerand (25 points) kept Immaculate Conception in the game netting 15 points through three quarters of play. However, the Rebels stifling defense shut down senior guard Khalya Latimer (2 points) and senior forward Danielle Deoul (6 points).