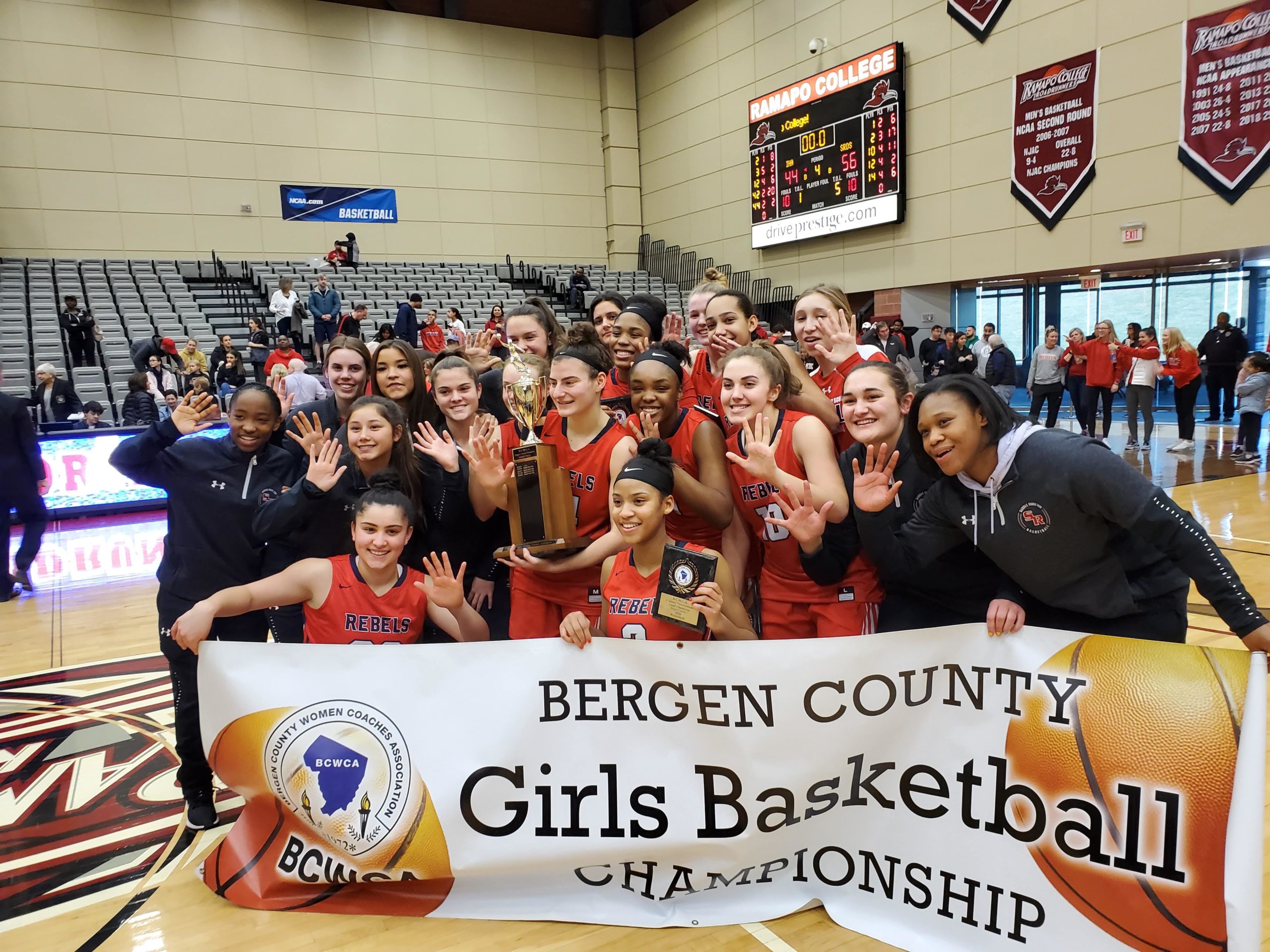 There were plenty of intriguing storylines heading into the 46th Annual BCWCA (Bergen County Girls Basketball Tournament) Championship Game on Sunday at the Bradley Center (Ramapo College of New Jersey). A re-match of the 2019 title game between Saddle River Day (20-3) and IHA (Immaculate Heart Academy) with the Rebels capturing their fourth consecutive championship in a row.

This time around IHA (21-2) coming in as the number one seed with the defending champs the number two seed. Both teams’ steamrolling through the tournament winning by significant margins. The Blue Eagles featuring a more experience team with seniors compared to just one for Saddle River Day along with four freshman and five sophomores.

Early on both teams’ struggled to score while committing numerous turnovers. The Rebels led at the end of the first quarter 9-6 with sophomore guard Cierra Pearson knocking down two three-pointers. In the second quarter Exhibiting a tenacious full court defense, Saddle Day forced the Blue Eagles into committing a bunch of turnovers that turned into fast break and transition points. Meanwhile IHA struggled from the perimeter and free throw line. The Rebels ended up taking a 25-15 advantage into the locker room.

“We buy in defense, we know we’re better when we get steals and getting out in transition,” said Saddle River Day sophomore guard Saniah Caldwell. “We know that it’s going to be one or two people but everyone on this team, coaches, bench to win. We take what the defense gives u and create our own.”

In the third quarter the Rebels seized control of the contest with freshman guard Madison McCarthy canned two trifecta’s that extended the margin to 31-18 with four and half minutes remaining. After tallying seven points in the first half, Caldwell netted six points as Saddle River Day boosted the lead to 39-24 at the end of the period.

“These are freshman and sophomores,” commented Rebels Head Coach Danny Brown. “They would have been never prepared this year. They had to struggle through those wars in Florida and everywhere we have been playing and figured out just in time here. Two weeks ago how to get open without the ball and create space. It’s all about chemistry and Jordan (Janowski) has done a great job of leading them on and off the court.”

The fourth quarter belonged to Rebels sophomore Dakota Corey tallying eight of her 11 points in the game. Saddle River Day dominated from beyond the arc draining, two more triples to finish up with a total of eight in cruising to the 56-44 victory thus tying Paramus Catholic’s record streak of five titles in a row from 1975 to 1979. Caldwell poured in game high 17 points. Anna Morris led all scorers with 20 points.

Caldwell on the championship victory, “We won last year, but only had three people returning and brand new team. We were the underdogs coming into this game and had a target on our back because we won last year. Winning with such a young team is such an amazing experience and I’m so proud of every single player and so thankful for our coaches who helped us get here.”

“Danny (Brown) is amazing, pushing us hard and knows this will pay off in a game. He runs so we can get the steals, get out in transition and out run teams. He pushes on defense because our defense sets the tone for everything during the game. Coming to Saddle River Day is a winning atmosphere with Danny and every girl here and come here to win and have the supporting cast and glad we had this win today.”

Head Coach Danny Brown on winning a fifth consecutive title, “Two things come to mind right away, number one strength of schedule and second thing being prepared. I would say without question our staff did their homework and I’m so proud of them and grateful. They had these kids really prepared and knew what was exactly going to happen. We changed things about three days ago and went with a different strategy.”

“When I put my arm around Rose (Battaglia) I didn’t realize it yet, no idea what it means except what she has done in the county, state and whole region. I can’t believe it on a personal level, on a program level I’m so happy for our school and program. These kids fight and come in and work probably harder than any team I ever had. This team in particular, the practices we had the last month have been incredible and intensity just great. Very proud and grateful to still coach here.”

“I expect to be back here, these kids are smart, driven, very passionate and every day is a pleasure. Practices have been an hour and half, three-quarters and can’t believe we are here and it’s been a great year and really happy for the kids to win this.”