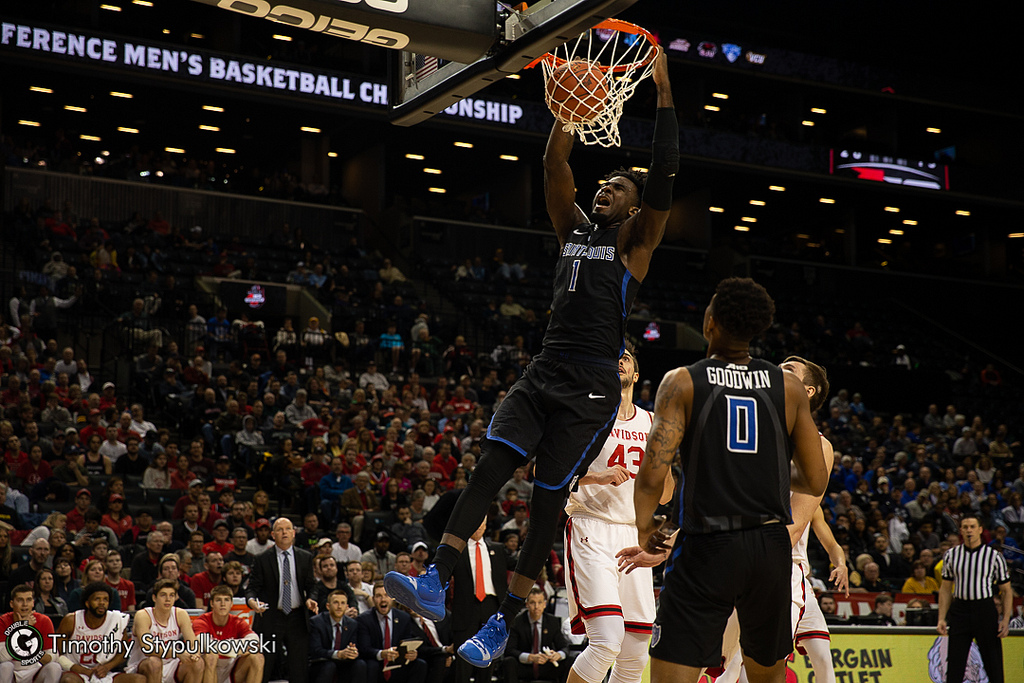 Photo Courtesy of the Atlantic 10 Conference

The title game is set in the Atlantic 10 Conference as St. Bonaventure and Saint Louis will meet on Sunday.

The semi-final round of the Atlantic 10 featured two teams who should not have been there and two others looking to pop bubbles for Selection Sunday. Brooklyn has been the scene for tremendous basketball over the years. This year’s A-10 Tournament has been the most intense basketball Barclays Center has seen, maybe ever.

There were two games on Saturday to set up Sunday’s Championship game and an automatic bid to the NCAA Tournament. The day began with the Cinderella story of the weekend.

Coming off an upset of number one seed VCU, Rhode Island looked to continue their run in Atlantic 10 Tournament against number four seed St. Bonaventure.

It looked good for the Rams as they jumped to an early lead as St. Bonaventure could not hit a basket in the early going. Rhode Island dominated inside as they scored 14 points in the paint int he first half.

Down by as much as 15 points, St. Bonaventure awakened ending the first half on a 13-0 run. They also held Rhode Island scoreless for the final 4:08 of the half. While the Bonnies finished on a run, they only shot 29 percent from the field. Rhode Island (18-15) held a 29-27 lead led by Cyril Langevine’s eight points and five rebounds.

“The kids never felt bad. They never got down,” said St Bonaventure coach Mark Schmidt. “They kept on working and that’s what we did today. We found a way.”

“Our coach, he always preaches, taking the first hit,” Kyle Lofton told the media after the game. “I feel like we took the first hit, instead of giving it and then towards the end, like we got more comfortable. People gained confidence and we just played tougher.”

The second half was more of the same for as St. Bonaventure (18-15) continued draining shots at will. Defensively they continued to shut down Rhode Island and force tough shots inside as the Rams had no answers to the Bonnies. Langevine picked up his third personal foul early in the second half which caused him to sit. Rhode Island struggled without their star forward as St. Bonaventure pushed the pace and continued applying pressure.

Kyle Lofton scored 12 of his game-high 25 points in the second half to lead St. Bonaventure. The Bonnies outscored Rhode Island 54-25 in the final 25 minutes of the game.

Langevine led the Rams with 15 points. Jeff Dowtin added 15 for Rhode Island, who may have played their way into a possible postseason tournament with their performance in Brooklyn.

The first half saw a slow start for Davidson as they went 1-for-11 to start the game. Even with the slow shooting start, Saint Louis only led 12-3 at the 12:20 mark of the first half. After Davidson called a timeout, the Wildcats went on a 21-6 run over 6:05 seconds to take a 24-18 lead. The Billikens countered with an 11-3 run of their own as the game was tied at 29 at halftime.

The second half saw Saint Louis go on a 12-0 run to begin the final 20 minutes. After Luka Brajkovic’s jumper 55 seconds into the half, Davidson went almost five minutes without scoring. Davidson could not overcome the Billikens stifling pressure defense as the half continued and finished with just 14 points in the second half. Wildcat rebounding, where they ranked 191st in the country, was also an issue in the game. Saint Louis exploited the deficiency outrebounding Davidson 45-27.

Jon Axel Gudmundsson finished with 15 points while shooting just 4-for-10 from the field. Davidson shot 26 percent from the field, including 17 percent in the second half.

“Well, we got off to a really good start, very good start and I thought our energy was right,” said Saint Louis coach Travis Ford. “And you know, when you get — and you get a start like that, you know the other team as good as Davidson is, you know they are going to make a run back at you.”

What’s Next At The A-10 Tourney

The championship will be contested between St. Bonaventure and Saint Louis on Sunday at 1 p.m. The game will be nationally televised on CBS.

Double G Sports will be on the scene for all the action at the Atlantic 10 Championship game.