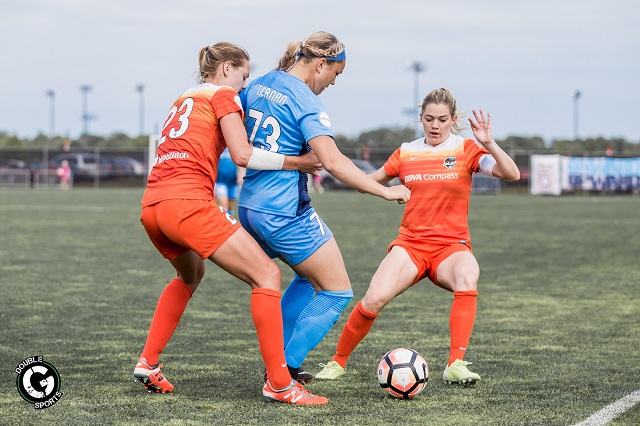 After a great performance this past Saturday, Sky Blue FC is looking to continue their home win streak when they face the Portland Thorns at Yurcak Field this weekend. Everything seems to be coming together for the New Jersey local team, who are 3-0 at home. SBFC have positioned themselves third with thirteen points (4-3-1), on the NWSL standings for Week 7.

Although Portland Thorns are only one point behind (3-1-3) after beating Boston Breakers 2-0 on the same week, SBFC has made itself known this season for racking up points at home.

We continue to see great improvements from players like Sam Kerr, who has been recognized by the NWSL as Player of the Month in May.

The SBFC rookie goalkeeper Kailen Sheridan has saved the team on several occasions, even by breaking records during the game against the NC Courage on Week 6, with most saves in a game. 11 to be exact. Sheridan was named to Canada’s Roster this week.

Raquel “Rocky” Rodriguez has been scoring game-winning goals for the past two out of the last three home games. Rodriguez has also been called to play two friendly games with the Costa Rican National Team.

Just yesterday, three SBFC players were named to the NWSL team of the Month. The players are: Sam Kerr, Sarah Killion and goalkeeper Kailen Sheridan.

Congrats to @samkerr1, @skillion16 and @Kailen_Sheridan, who have been named to the NWSL Team of the Month for May! httpss://t.co/zzC1EafeJb

Amongst local figures, Erica Skroski’s name was added to the U.S. U-23 WNT roster this week. We also noticed coach Christy Holly’s move last game, when he started Madison Tiernan. This seems to be a great way to boost the NJ native’s confidence.

ICYMI: Madison Tiernan Start On May 27

Madison Tiernan’s home debut with SBFC was on April 23 against the Boston Breakers. She replaced Leah Galton at the 71st minute. However, her official home debut as a starting XI was last Saturday, May 23 against the Orlando Pride. It was definitely an exciting night for her.

Tiernan’s start at Yurcak Field marked a special moment in her career. During her collegiate soccer years, she played 88 matches and scored 25 goals for the Scarlet Knights, some of which were homed at Yurcak Field.

“Being able to come back and play on that field is such a humbling experience,” said Tiernan on an exclusive interview for DoubleGSports.com. “We have been working so hard as a team since the beginning of the season, and to be considered for the starting eleven is a great feeling, and I have so much pride. Is like a dream come true.”

For Tiernan, keeping the home win streak is part of Sky Blue FC’s mentality for the upcoming match against Portland Thorns. Defending their home field is part of their motivation on trying to get the three points this weekend. “Our focus is game to game. Each week we want to go out and do our best. And yes, we would like to keep the streak going, especially at home.”

That motivation has also caught fans’ eyes. For the past three home games, the fans showing up at Yurcak Field have increased in numbers. If you can’t catch the game live on June 3 in Piscataway, NJ, you can also watch it on the Go90 app. Kickoff is set for 7:00pm ET.