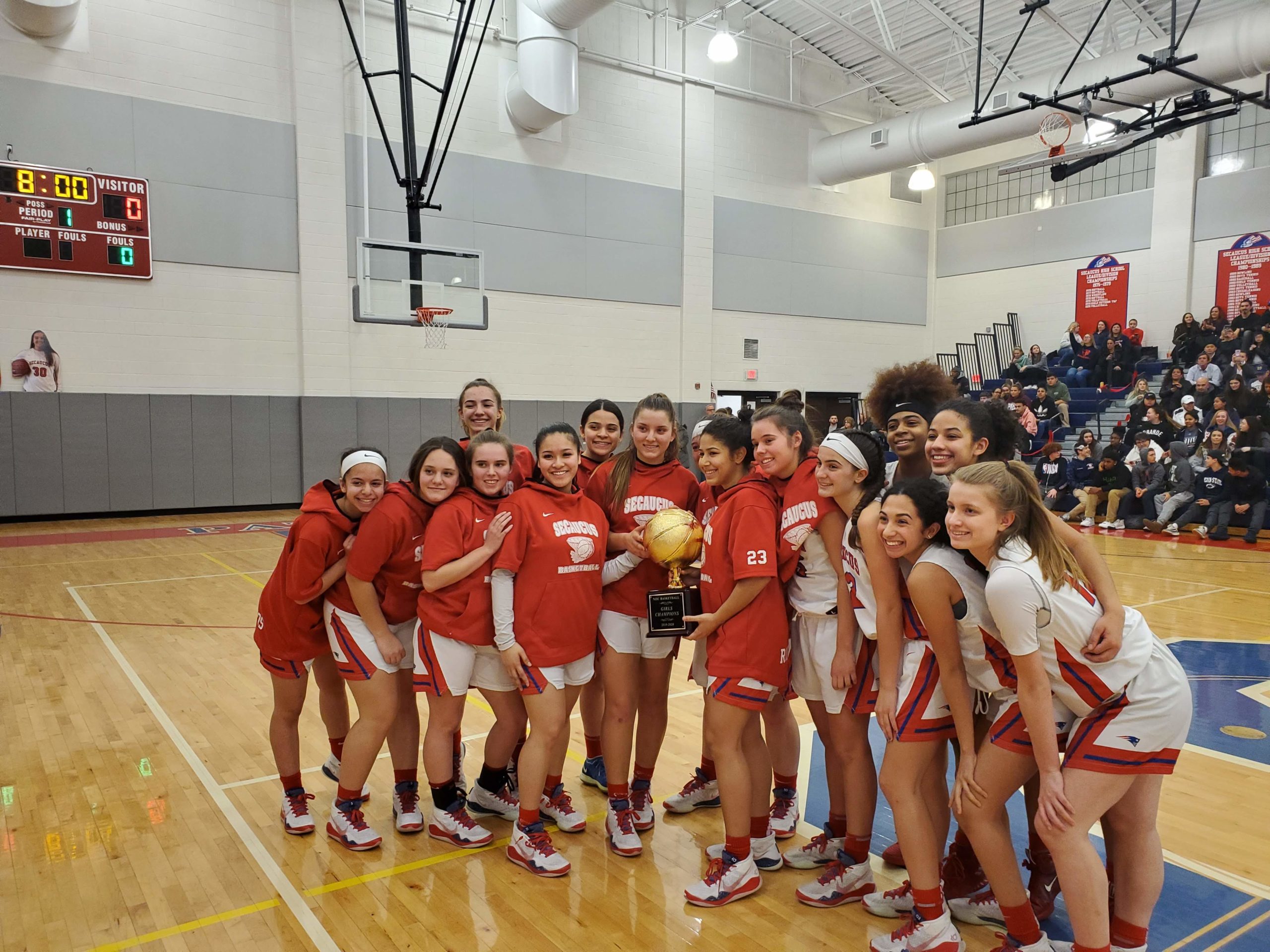 Already unable to compete in the state tournament playoffs, the Secaucus (23-2) girl’s basketball team dealt with another setback on Wednesday in getting eliminated by Hudson Catholic in the semifinals of the Hudson County Tournament. However, the Patriots still had plenty of incentive facing off against Rutherford (19-7) in the NJIC Girls Basketball Tournament Championship Game on their home court.

Leading 14-10 after the first quarter, Secaucus hit a rough patch offensively not scoring a point for nearly four minutes to start the second quarter. Senior forward Jasmin Bujari put an end to the scoreless streak by converting a three-point play. The duo of Bujari (8 points) and senior Damari Rodriguez (7 points) helped the Patriots increase their advantage to 27-16 heading into the locker room. Defensively holding Rutherford to a four points in the last five minutes of the quarter.

“I thought we were a little sluggish to start, that might be playing late last night against Hudson Catholic, a tough opponent and trying to get revved up,” said Secaucus Head Coach John Sterling. “Rutherford came out really well in the beginning, hit open shots and really outrebounded in the early part of the game and hurting us on the offensive board quite a bit and we were not boxing out well. In the second quarter, we executed a little bit better offensively, ran the floor and got easier shots.”

The third quarter ended up being a one-person scoring show in Rodriguez, totaling 12 points as Secaucus extended the margin to 44-22 at the end of the third quarter. Not cooling off either was Buchari registering five more points. Junior Lyndsey Ross provided further output with 10 points in the contest including canning two trifecta’s.

“In the first half I was kind of off, just had a game last night and my body and legs were killing me but I knew I had to come out strong and push through to get this win and really wanted it,” said Damaris Rodriguez. “I told them when we went into the locker room (halftime), we had to do pick and rolls, look for the ball and they stepped up and made the tough shots and just being able to help me out is great.”

In the final minutes of the fourth quarter Sterling was able to empty out bench thus allowing the senior players to leave to a thunderous applause and ovation from the home crowd as the Patriots cruised to the 56-30 victory over the Bulldogs. Rodriguez finished with a game high 23 points while Buchari recorded a double-double with 14 points and 11 rebounds. Harmony Marquez led Rutherford in scoring with nine points and team high 15 rebounds. Secaucus held Bulldogs 1,000 point scorer Jaeli Torres to a single point.

“In the second half we boxed out, rebounded, and held them to one shot on most trips and that was the difference,” Sterling remarked. “Damaris is a fabulous offensive player, Jasmin was a completely different player in the third and fourth quarters, great on the boards and boxed out on every trip and got every ball that was up there and proud of the way she bounced back.”

“I wanted to save our legs for this and was important especially with no state tournament and getting knocked out in the counties,” she continued. “I wanted the girls to be able to win this championship and so happy for them.”

“It’s unfortunate we could not play in the state’s, nothing we could do about it, just move forward and keep pushing in order to come out with the win but the trophy feels amazing,” said Damaris Rodriguez on the championship win. “Coach Sterling is everything to me, amazing and could have done anything without him and supported me through everything and to play for him for four years has been a pleasure.”