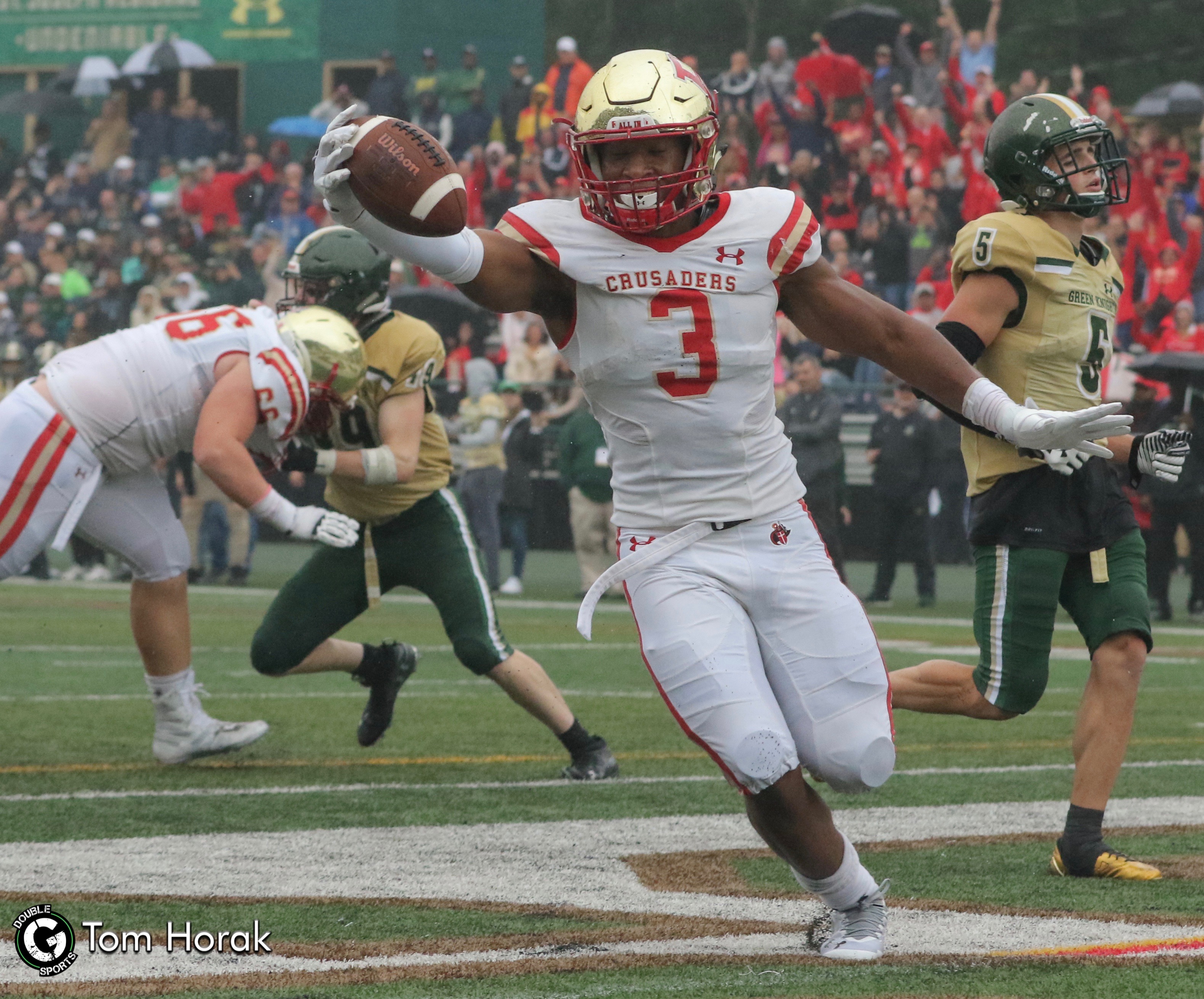 Bergen Catholic (5-1) Head Coach Vito Campanile said afterwards at halftime either the bottom is going to fall out or we are going to respond. A back-breaking 87-yard touchdown from St. Joseph (Mont.)(4-2) running Te’Rai Powell (4 rushes for 96 yards) made it 20-10 with just about 25 second left in the first half.

“Our defensive coordinator Tony DeBellis came into the locker room like a maniac and challenged our guys,” said Campanile. “You invest 4,000 hours into something and you don’t want to give up too early. We understand how to respond and build leadership. The mission of our school is building dynamic leaders. Through adversity you gain strength.”

The Crusaders definitely responded to the message forcing the Green Knights offense into a quick three and out to start the third quarter. Quarterback Andrew Boel (12 of 26, 253 yards) went to work connecting on an 18-yard pass to Tyler DeVera for 18 yards and Cody Garrett to set up first and goal at the one-yard line. From there Boel did the rest sneaking in for the score making it 20-17 with 5:40 left.

After allowing a combined 184 yards of rushing in the first half to Audric Estime (12 carries for 99 yards), Bergen Catholic’s defense led by Jeremiah Grant’s three sacks on the day neutralized both runners allowing just 10 yards rushing in the second half.

“A collective effort, 18 guys in the defensive plan today and we needed all 18 of them,” Campanile said. There was no bickering, we mastered our personnel and we played right down to the last minute.”

Another player that stepped up in the clutch for the Crusaders was Anthony Corbin. St. Joseph (Mont.) moved deep into Bergen Catholic territory highlighted by a 70-yard pass from quarterback Michael Alaimo (10 of 16, 169) to Brett Buckman. However, on third and 11, Corbin picked off a pass by Alaimo.

“We definitely came out flat in the first half, when we got into the locker room, coach said we have to play a lot harder and way tougher than them, said Corbin. We had to bring the energy up and did that in the second half.”

Starting out at the 25-yard line early into the fourth quarter, Bergen Catholic caught breaks on two third down plays as personal fouls were assessed against the Green Knights defense. On third and one at 11-yard line, Corbin managed to push through the line of players for the first down. Not wasting any time, Corbin scampered in 10 yards for the score putting the Crusaders up 24-20 with 9:29 remaining.

“It’s exhausting but more exciting making plays on both sides of the ball and can’t beat that,” Corbin said. It shows how good our offense is and potential when we play to the best of our ability and we’ll put points up every game. Every time we were in the huddle they just told me to run harder than you ever have and give everything I got.”

With both teams exchanging punts late in the fourth quarter, St. Joseph(Mont.) had one last opportunity to take the lead with 2:40. Grant made sure that possibility would not exist, sacking Alaimo on fourth down. Still having to run the clock out, Corbin punctuated his impressive second-half running performance with a 31-yard run up the middle as the seconds ticked off the clock, finishing up with 12 rushes for 70 yards.

“Anthony (Corbin) is a special player, going to be an Ivy league stud, a straight A student and tremendous football player,” said Campanile. “We’re down two Division I running backs and he steps up and that’s what senior leadership is all about and happy for him. A great day and epic Bergen Catholic win.”