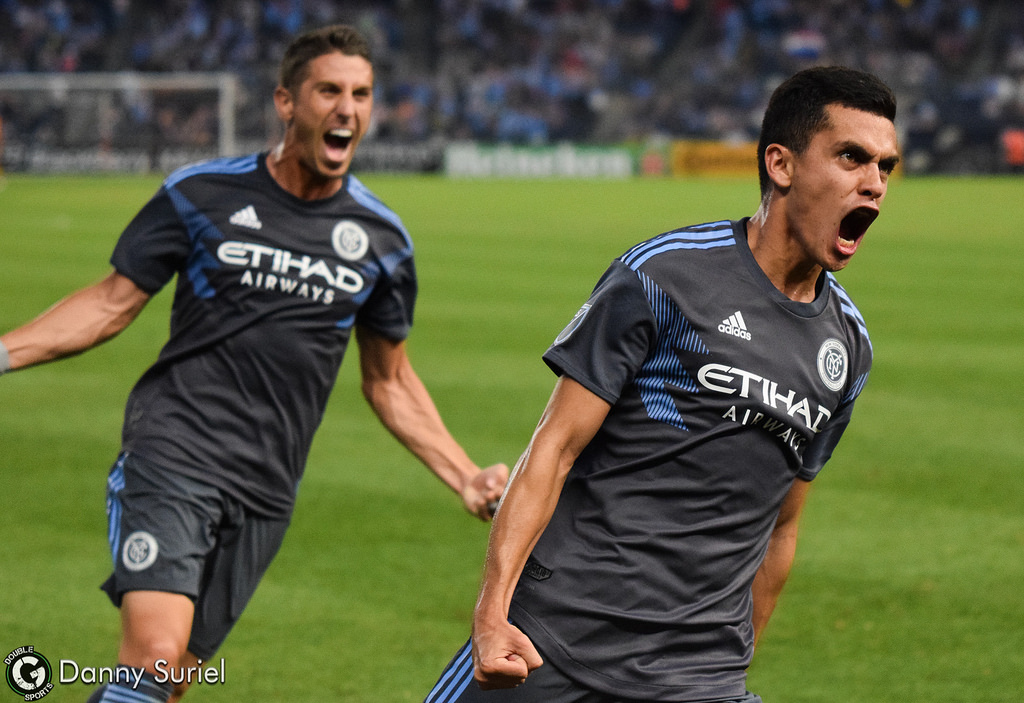 Second half victory for the Boys in Blue

Another victory was achieved by the NYCFC boys in blue at Yankee Stadium, Saturday night, marking their third straight win. The Boys in Blue seemed to mimic the same starting pattern that they had in Wednesday’s game, having most of the possession of the ball in the first half but not producing goals.

The Boys in blue could not attain access to the net but stayed aggressively strong in the first half. Moralez couldn’t have come much closer scoring the first one on the 52’ when he pickpocketed the last defender and strode clear but Steffen once again came to his side’s rescure. Jesus Medina was inches away from converting at the end of the same move.

Jonathan Lewis, who was brought into the game on Wednesday night was introduced for Matarrita a minute later as Torrent gave the him his longest run-out yet. The quick and swift 20-year old had the Crew defense chasing his shadow on 71’ when he strode clear down the left flank and delivered for Medina who slipped through Moralez but this time it was Columbus who had the heroic last man block. The Columbus Crew defense was putting up a great fight against the Boys in Blue and when it seemed like the game would end in a tie, the game changed.In the 80th minute when Lewis’s strike came off the post back to him and he crossed for Medina who made it in.

Torrent’s men weren’t finished there, with Anton Tinnerholm bundling home the clincher in stoppage-time and ending all hopes For Columbus Crew as he noted down the second goal of the night as well as his third of the season.”They are a good team. We played three games in six days and they haven’t, so it felt like some legs were a little bit tired out there, but I felt we showed character, especially in the second half. Everybody was really tired but we kept on fighting and we knew that Columbus is one of the tough teams in the league. We still managed to win and I think the best thing is that we knew that we can do better than this and we’re still standing here with the three points and a clean sheet”.

Domènec Torrent has now won all four of his home games as NYCFC head coach and this game was definitely special, falling on his birthday. NYCFC will be in the road for their next game playing against Orlando City SC on Thursday July 26.