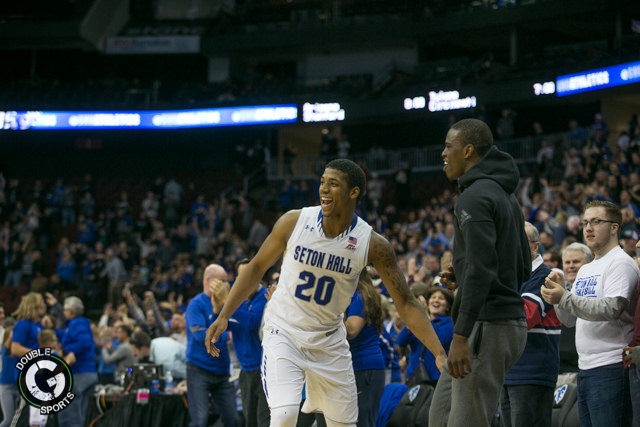 After Saturday’s lopsided loss to Villanova in front of a record-setting home crowd, Seton Hall was back at it on Wednesday night knowing that their NCAA Tournament hopes took a hit.  Coming in to the Prudential Center was the 18-9 Xavier Musketeers, a team who is also fighting for their NCAA Tournament lives.

Seton Hall took care of business as they defeated Xavier 71-64 in front of a crowd of 7,139 in Newark.

The first half began to turn in Seton Hall’s (17-10, 7-8 Big East) favor as a strong offensive showing from Desi Rodriguez (10 points) and tough defense kept Seton Hall in the game. Unfortunately for the Pirates while their defense picked up steam, the offense disappeared has the Pirates went 0 for their last six from the field in the last 3:06 of the second half.

The second half saw the Pirates defense continue their intensified play forcing six Xavier turnovers in the first ten minutes of the half. The offense also awakened as freshman Myles Powell hit two three-pointers giving Seton Hall lead forcing a Xavier timeout. After that the game turned into a half-court game for both teams as the action slowed considerably.

With five minutes remaining and Seton Hall up 59-53, Delgado hit jumper to stretch the lead to eight.  Seton Hall built the lead after holding Xavier (18-10, 8-7 Big East) without a field goal for well over five minutes as the Pirates had to grind out possessions and points for much of the half. A driving Rodriguez basket with 1:20 remaining sealed the win for the Pirates and gave them their seventh conference win of the year.

Angel Delgado finished with yet another double-double scoring 25 points and grabbing 13 rebounds, the 45th of his college career. Rodriguez had with 22 points while Khadeen Carrington, a week removed from a 41-point outburst, scored just five points on 1-of-9 shooting.

Xavier was led by J.P. Macura who scored 22 for the Musketeers who ended the game with 13 turnovers which led to 14 Pirate points. After holding a one-point lead at halftime, Xavier was outscored 41-33 in the second half.

After three straight games at The Rock, Seton Hall hits the road to take on DePaul in Chicago. Game time is set for 2 p.m. ET and the action can be seen locally on the YES Network.