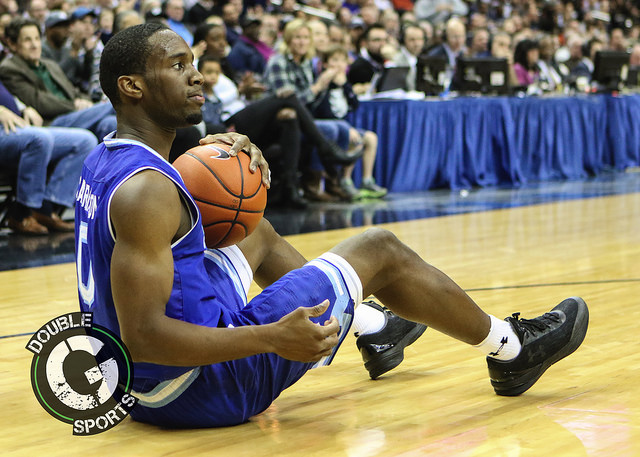 Saturday’s game between the Seton Hall Pirates and Villanova Wildcats was important for both teams. For the Pirates, the game was an opportunity to show the NCAA Tournament committee that they are the real deal after going 3-3 in their six games in a nationally televised game. Villanova needs wins to hopefully garner an overall number one seed in the NCAA Tournament in a few weeks.

The better team was definitely seen on Saturday as number two ranked Villanova used a hot second half to defeat the Pirates 92-70 in front of a sellout crowd of 16,733 fans at the Prudential Center.

The first half started the exact way Pirate fans wanted. Angel Delgado made an immediate impact as Villanova had no answer to the junior center inside. Seton Hall led by six at the 17:20 mark of the first half and dominated ‘Nova inside for the first 10 minutes of the game.

As the half went on, Seton Hall deserted the inside game and began shooting lower percentage mid-range and three-point shots which were not going down. Villanova on the other hand began hitting their perimeter shots to the tune of 60 percent from field, led by Jalen Brunson and his 18 first half points which included a perfect 5-of-5 from the field. The Wildcats took the lead and after a big three by Khadeen Carrington to cut the Wildcat lead to three, Villanova went on an 11-1 run to end the first half. The Pirates was held without a field goal for the final 2:47 of the half to take a 42-31 lead into the locker room.

“I thought we were in good position, but in the last three minutes of the first half Jalen Brunson flipped a switch and hit a tough step-back three, split the pick-and-roll and hit Bridges in the corner for a three and that took a little momentum out of our sails,” Seton Hall head coach Kevin Willard said after the game. “But then Paschall comes out hits a three to start the half. They are a really good basketball team.”

The second half saw Villanova jump out on the attack going up by as much as 27 at the 12:53 mark of the second half.  Seton Hall was hampered by bad shooting all afternoon and their woes continued in the second half. A 30-5 Villanova run put the game out reach as Seton Hall fell to 6-8 in the Big East as they suffered their tenth loss of the season. The pressure is on for the Pirates as the regular season begins to wind down.

Angel Delgado led the way for Seton Hall as he finished with 19 points and 12 rebounds, his 21st double-double of the season. Carrington, fresh off 41 points on Wednesday, scored 22 points but those points came on 7-of-16 shooting.

Villanova (26-2, 13-2 Big East) finished the game shooting 67 percent from the field, including 57 percent from three-point land. The Wildcats were led by Kris Jenkins and Jalen Brunson who both scored 22 points.

Seton Hall’s drive to the NCAA Tournament continues when they take on Xavier from the Prudential Center on Wednesday. Game time is set for 7 p.m.