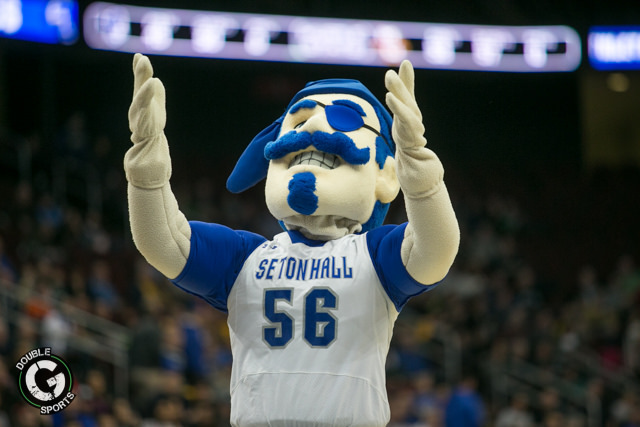 Desi Rodriguez led all scorers with 21 points and Angel Delgado had his 12th consecutive double-double as Seton Hall picked up their biggest win of the season with 70-64 win over No. 13 Butler on Saturday.

The Pirates were looking for one more signature win prior to the Big East Tournament. Going into the game, Seton Hall was considered a lock for the NCAA Tournament with The Hall being has high as a nine seed in the tournament. While it seemed that they would participate in March Madness, Seton Hall saw Saturday’s road game as statement game not only to the selection committee, but to the rest of the country as well.

After a back and forth first half where both teams held eight point leads, Butler ended the first twenty minutes with a three point lead at halftime. The game seemed lost for Seton Hall (20-10, 10-8 Big East) as the Pirates faced a ten-point deficit with 7:03 remaining in the game after a Kelan Martin three-pointer.. As is the norm lately for Seton Hall, their defense stepped up and held Butler to 2-of-10 shooting down the stretch. While the Pirates’ shooting was up and down throughout the second half, the offense awakened and went on 23-7 run over the final six minutes.

“This victory was about getting key stops down the stretch,” Seton Hall coach Kevin Willard said. “Obviously, Butler is a tremendous basketball team. Winning here in a building with so much tradition is huge. I think another key is that we had some time to work on our offense this week, and that was better.”

The 23-7 Seton Hall run included 11 points from Khadeen Carrington who finished with 17 points, including two free throws to ice the win for the Pirates. The win gave Seton Hall their first back-to-back 20 win seasons since 1992-1993.

“I think the key was recognizing who their top scorers are and then really locking down on defense down the stretch,” Carrington said. “On the offensive end, we just stayed aggressive. Even when we were down 10, I told the guys that this game wasn’t over. We ran our offense and got the ball where it needed to be.”

Butler (23-7, 12-6 Big East) was led by Martin who finished with 19 points but Butler was held to 40 percent shooting, including 31 percent in the second half. Butler was also plagued by their dreadful three-point shooting as the Bulldogs shot 28 percent (6-of-21) from three-point land.

Delgado ended Saturday’s game with 20 points, 16 rebounds and four assists for his 23rd double-double in 24 games. Myles Powell finished with eight points, including a big three-pointer to tie the game at 59-59 in the middle the Pirates’ game finishing run.

Seton Hall’s season-ending win earned the Pirates a number five seed in this week’s Big East Tournament at Madison Square Garden. They will take on the Marquette Golden Eagles on Thursday at 2:30 p.m. in a game that can be seen nationally on Fox Sports 1.