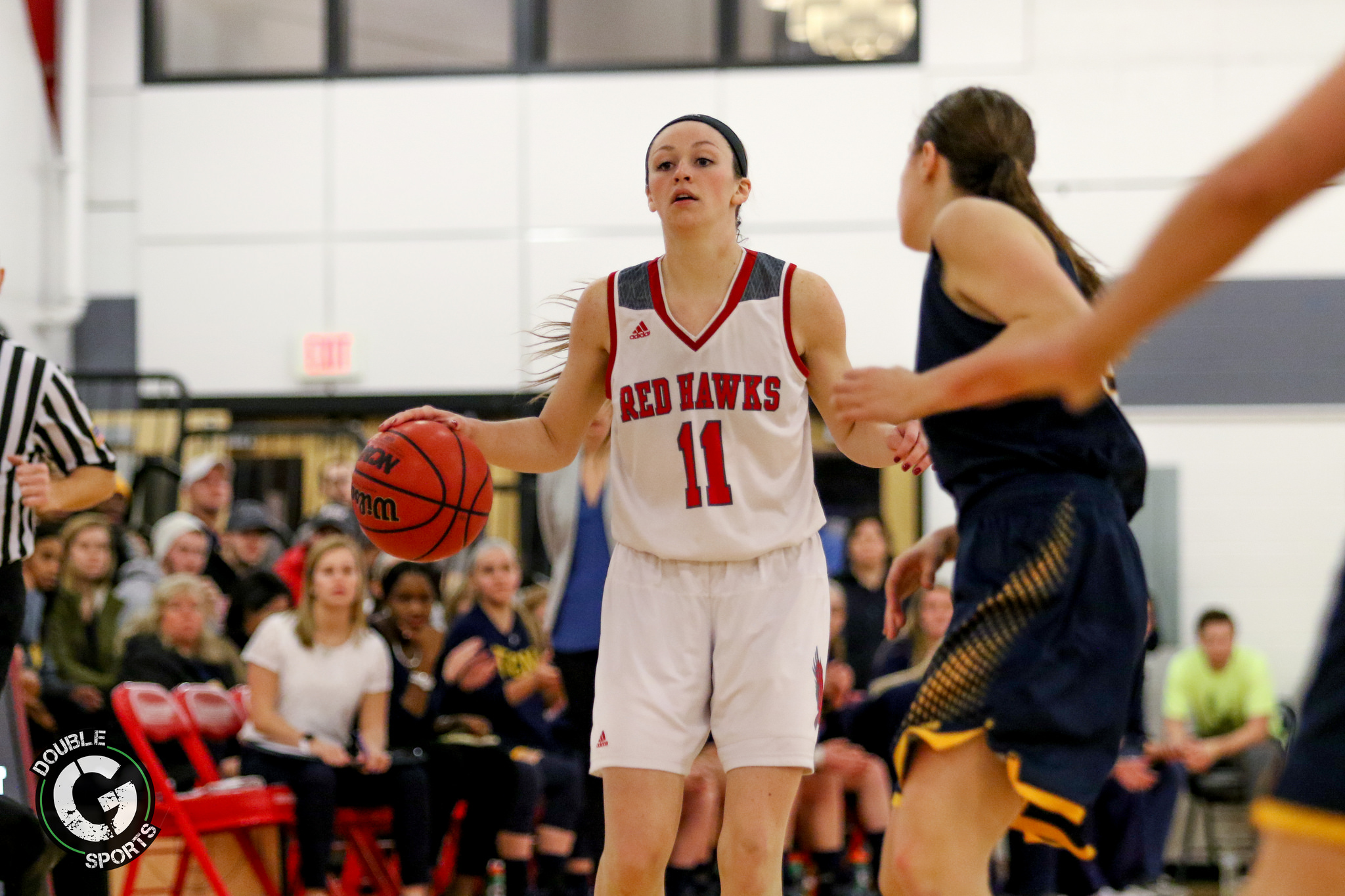 Even with Winter Storm Riley wreaking havoc outside the Panzer Athletic Center on Friday night, Montclair State Head Coach Karin Harvey said plenty of fans still came out, a couple of recruits traveled several hours away, families and school president to watch the Red Hawks first round game of the 2018 NCAA Tournament against Old Westbury.

Holding a slim 18-17 lead against Old Westbury after the first quarter, the Red Hawks turned up the defensive intensity limiting the Panthers to one point in the last 3:27 of the second quarter. Meanwhile the trio of senior Katie Sire(10 points), senior Taylor Harmon(8 points) and sophomore Alex McKinnon(13 points) and combined to score 31 points as Montclair took a 40-28 into the locker room. The Red Hawks sizzled from the free throw line draining 10 of 11 free throws.

“I thought the first quarter we were adjusting to their style of play a little bit and didn’t get as many defensive stops as we would like to see but then we got adjusted to their style, a better job on the defensive end and communicating,” said Harvey. “On the offensive end we did a job attacking and got them in some foul trouble. Overall we kept going to the rim and scored points on the free throw line and part of the game plan.”

In the third quarter, the Red Hawks took advantage of foul trouble plaguing Old Westbury. Leading scorer Charlotte Renker and Destiny Marino picking up their fourth foul a minute apart allowing Montclair to extend the lead to 62-44 at the end of the quarter. The Red Hawks kept pouring it on in the fourth widening the advantage to 19 points with less than nine minutes left. Old Westbury managed to chip away at the lead a little bit late but freshman Kim Calloway squashed the run scoring five of her 13 points as Montclair pulled away for the 90-69 win. Sire tallied a team high 24 points including a perfect 12 for 12 from the charity stripe line while Harmon and McKinnon contributed 18 points apiece. Senior Kate Tobie dished out 10 assists. The Red Hawks ended up shooting 51 percent from the field while knocking down 26 of 34 free throws.

“I thought getting to the free throw line and shooting 76% is pretty good,” Harvey said. “Katie (Sire) struggled, they were face guarding her the whole game so she couldn’t score anyway so she found a way to get herself to the free throw line and that is what All-American’s do and find a way to contribute. She got banged up but did a great job helping us out on the rebounding front.”

“Kim Calloway did a fantastic job on the defensive side and came in and took care of their point guard and made a big difference. She had a couple of run outs in transition and Kate (Tobie) found her on the long pass. She played like a veteran tonight and no nerves and came in and did what she does and very proud of her.”

Montclair State (24-3) has a quick turn around in the second round facing Gettysburg College at 5 p.m. on Saturday at the Panzer Athletic Center. The Bullets are 26-2, winners of 16 in a row and 10-1 on the road. Gettysburg is led by senior forward Emily Gibbons averaging 13.1 points and 11.1 rebound per game, junior Emma Dorshmier at 14.4 points and sophomore Ashley Gehrin at 11.8.

“Very tough, they’re a really good team, 26-2 record, run a lot of sets, have the conference player of the year (Emily Gibbons), and shoot the ball,” Harvey said. “They are pretty balanced attack wise so it’s going to be a tough game. We are going to have to play some defense, relentless on the boards again and continue to get to the rim and ball inside. We just have to play our game and see where we end up.”