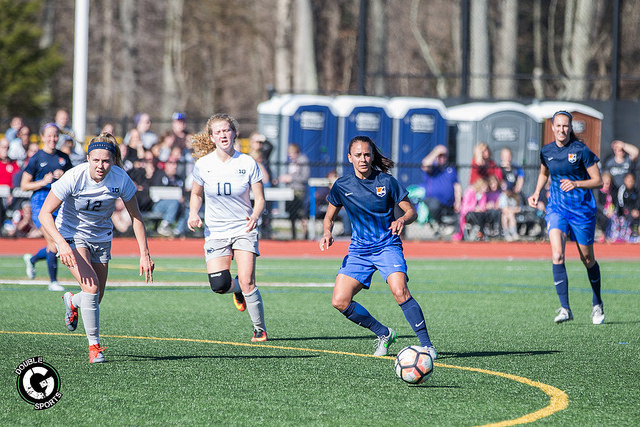 The wait is over!  Saturday marked the beginning to the long-awaited fifth season of the National Women’s Soccer League (NWSL) opening week.  Sky Blue FC and Seattle Reign closed the Saturday go90 broadcast debut with a 1-1 draw for both teams. In case you missed it, Paola correctly predicted the score of the season opener for Sky Blue.

Christy Holly had three of his rookies make their debut against the Reign.  Canadian national team player Kailen Sheridan started between the pipes, and rookies Mandy Freeman and Kayla Mills defended the backline with Erica Skroski and Christie Pearce (the Sky Blue veteran will go by her maiden name this season). As noted in the preview, Kelley O’Hara started up front with Sam Kerr.

The first 15 minutes of the game served as a “warm-up” for both, Seattle Reign and Sky Blue FC. However, SBFC quickly gained more control of the ball, connected more passes and created better opportunities to own the first half of the game. Sky Blue controlled possession (53%) throughout the first half.  With Leah Galton playing in the midfield, the attack was relentless.  The team blasted three times as many shots on frame as Seattle (9-3) according to the broadcast statistics. Kerr looked to be back in good form, creating several attacking opportunities for herself and her teammates.  Although New Jersey dominate the attack, Seattle keeper Haley Kopmeyer and her defense allowed no goals. Midfielder Jessica Fishlock and defender Carson Pickett were particularly efficient at disrupting the New Jersey attack.

The final 45 minutes had opportunities for both teams. Fifteen minutes into play, Erica Skroski conceded a penalty kick by fouling Megan Rapinoe in the penalty box.  She buried her shot from the spot to put the Reign up 1-0 in the 55th minute of play.  Roughly five minutes later, the flying squirrel – aka Kelley O’Hara – was taken down in the box before she could connect on a cross from Kerr. Sarah Killion sneaked a low shot past Kopmeyer to bring her side even.  With nine shots registered on goal, Sky Blue created scoring chances 64% of the time*.  The New Jersey squad finished the evening with 14 shots, second to only the North Carolina Courage (21) for opening weekend.

New Jersey gave a solid performance, especially on the attack. Sky Blue struggled to get quality looks last season. The fact that players like Kerr, Galton, O’Hara and Raquel Rodriguez already have an eye for the goal is a good sign. “We are definitely satisfied with the way we started the season,” said coach Holly.  While the showing was a step in the right direction, Holly hardly expects his team to be content.” … we know that today was just the first step in what will be a season-long journey for this group of extremely talented and dedicated players.”

On Sunday, Sky Blue will travel to Boston. The Breakers are coming off a rough losing season (3-15-2), but Sky Blue cannot afford to take their foot off the gas.  The Breakers secured Rose Lavelle as the number one pick in the 2017 Draft. Lavelle and Canadian striker Adriana Leon have already looked dangerous for Mike Beard and the Breakers.

Sky Blue FC must prove they can post multiple goal games consistently, while holding other teams to low scores.  Comparative to the rest of the league, Caroline Casey and Sheridan are novices in net as professionals.  Youth is certainly not a liability, but veteran experience is an unquestionable asset.  Saturday offered signs of  a successful season to come.  However, more will be revealed Sunday, as Sky Blue looks to handle the grit and speed of a Boston team with a lot to prove.

*Stats were pulled from NWSLSoccer.com on April 19th

The case for and against Jim Curtin as Philadelphia Union coach
Who Will Fill at Left-Back for NYCFC with Matarrita Out?
Posting....