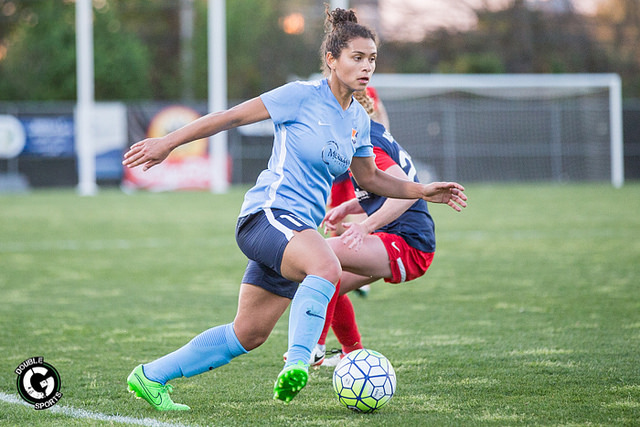 On Saturday, Sky Blue FC earned another preseason win against the University of North Carolina. Returning midfielder Raquel Rodriguez notched the lone goal in the 16th minute. Despite the win, head coach Christy Holly and his players know there is more work to be done.

As was the case last season, there are a handful of new faces coming to play for the New Jersey-based team of the National Women’s Soccer League (NWSL).  Entering his second year at the helm, Holly is focused on chemistry, “It’s not a matter of what we can do, it’s just a matter of when we can we be ready,” said Holly on Saturday.   As Double G Sports noted after the 2017 NWSL Draft, Sky Blue has a variety of talent, but how will that come together on one team?

We asked Holly if it was a challenge creating a team identity with such a variety of high caliber experience. “It’s more just getting everyone learning from each other’s story and understand where each person is coming from,” he responded. This necessary process in building a team allows coaches and players to access what tools are on the table, and select the right pairings to reach the larger goal. Holly added, “It’s a fantastic opportunity to do something a little bit different when you have so many different cultural backgrounds.”

Despite their previous success elsewhere, the pressure is on for the 25-player preseason roster.

A core group of veterans return to Piscataway this season. Australian national team member Sam Kerr and current national team player Kelley O’Hara have the potential to lead the team beyond their 7-8-5  finish in 2016. Last season, Kerr missed the beginning of the season recovering from injury. Her impact was immediate upon her return, and continued with Perth Glory of the W-League in her home country of Australia.

Sky Blue teammate Nikki Stanton joined Kerr in Australia for the off season, and the two helped Perth Glory to the W-League Grand Final.  Kerr led Perth in assists (4) and goals (10).  Her ten goals placed her second in goals for the W-League. After a successful season with Perth Glory in Australia, she is ready to go full steam ahead,”She’s fit. She’s ready to go,” said Holly.

When not with the US National team for the Olympics, O’Hara played a key role in the attack. She recorded one goal and two assists in just over half of the games (12 of 20) played by Sky Blue.  O’Hara will move to the back as needed, but Sky Blue FC still has Christie Rampone, Erica Skroski and Erin Simon to stabilize the back line.  Additionally, Holly and his team selected two rookie defenders in anticipation of O’Hara playing more of an attacking role.

Rookies react to the pros

Two reigning College Cup champions, Mandy Freeman and Kayla Mills, landed in New Jersey together. The defenders helped the University of Southern California to its second title in program history.  However, neither is content to rest on their laurels. When Double G Sports asked what they look to improve come opening day, the pair recited in unison, “everything.”

Freeman felt that would be the case in any situation, but especially as she transitions to a professional league, “The big difference coming from college … is that everyone is here for the same reason, the want to compete, they want to win.” She added. the expectation is each individual will prepare everyday, to take the information and the training provided, and perform at a high level.  Mills agreed, “it’s definitely more business-like, but [the work] is definitely worth it, because this is our job. It’s definitely a blessing to do what we love as our job.”

The increased demand is met with the support of teammates.  As is the case for Holly, Freeman see value in learning about, and learning from the other players. “[Moving forward] I think it’s just building chemistry between players that are going to be playing next to each other.” For Mills, preparing mentally and physically for the pace of the game is crucial as well, “everyone’s good now, so [it’s] those little things that make people better … I wanna be on Sky Blue for the opportunity to be better [than just average].”

Sky Blue will hold another open scrimmage this Sunday as they face Penn State at 4:00pm at Georgian Court University.  The team will them conduct final presentations before opening in Seattle for the second year in a row. The first match will take place on Saturday, April 15 at 7:00pm PT (9:00pm ET).