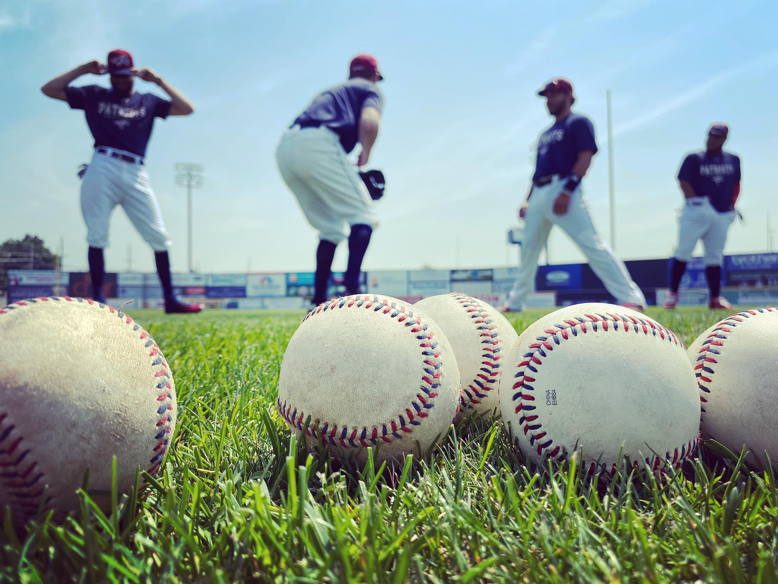 With a limit on outdoor gatherings, the Patriots needed as many fans as possible to minimize financial loss during this season.

TD Bank Ballpark in New Jersey, home of the independent minor league Somerset Patriots is one of only 14 ballparks, and the sole location in the northeast, where fans can currently attend a professional baseball game.

Amid a pandemic, it was no easy journey, but the team was able to overcome obstacles and find a way to play baseball with people in the stands and still meet state requirements.

After the Atlantic League, an eight-team independent professional baseball league couldn’t play their regular 2020 season, Patriots President/GM Pat McVerry had an idea. He asked Jon Hunton, the team’s pitching coach and director of baseball operations, to organize a small workout, just a dozen guys, to show the community that the Somerset Patriots organization was alive and well.

The workouts drew substantial interest from minor league players across the region and left an array of players asking to participate. Based on the enthusiastic response to the workouts, McVerry, Patriots Chairman Emeritus Steve Kalafer, and additional team staff began formulating a plan that would salvage the Somerset Patriots Baseball 2020 season.

After considering their options, taking into account the rules and regulations that change by the day, they decided that a series at TD Bank Ballpark was their best bet.

“We wanted to control the environment,” McVerry stated. The Patriots solved the issue of no team to play against by creating the New Jersey Blasters to face off within a 13-game series.” 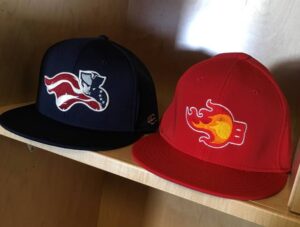 The SPBS features the Patriots and Blasters – courtesy of Somerset Patriots

As word of the Patriots’ plans quickly spread, McVerry received calls from A-list MLB agents, as well as big-league front office personnel asking how their players might be able to participate. McVerry even got a call from the Pittsburgh Pirates asking if they could have their minor leaguers play against the Patriots.

In spite of so many amazing offers, the Patriots vowed to give back to the community and decided to allow only local ballplayers to participate in the SPBS.

“We’re doing this for the community and guys in the area,” Hunton explained.

Jon Hunton had the challenging task of filling out competitive rosters for both the Patriots and Blasters. He reached out to players he knew, but “once the word was out that we were doing this the floodgates started opening up,” Hunton said. I had someone reaching out to me about somebody, whether they were from the area or not.” Some players even offered to pay the Patriots to participate, or even cover the cost of housing.

In addition to the team’s proximity to Central Jersey, players’ off-the-field behavior played a major role in the signing decisions.

With player and fan safety being the number one concern, McVerry and Hunton need to be confident that players follow all state and CDC guidelines on and off the field.

“When you take a collection of guys in their 20’s all coming from different homes and different parts of the state, you worry that there is going to be a COVID positive amongst those guys,” McVerry said.

The Patriots knew their best bet was to work with players they trusted to take the proper precautions off the field.

With a limit on outdoor gatherings, the Patriots needed as many fans as possible to minimize financial loss during this season. McVerry crunched the numbers and determined a breakeven point of selling 1,500 tickets to each of the 13 games.

McVerry and his staff sent a detailed proposal outlining their plan to Governor Murphy’s office for approval. When the Patriots heard back from Trenton after weeks of waiting, their plan was approved, but for only 200 people in the stadium.

After endless Zoom calls, the Patriots front office decided to go forward with their plan, even if it meant taking a financial hit with less than 140 fans in the stands, since players and staff must be taken into consideration.

Good news came just five days prior to the Patriots’ announcement of the upcoming baseball series when the state raised its limit on outdoor gatherings to 500, meaning that with essential personnel at the ballpark, the Patriots could have around 440 fans. Season ticket holders were given first access before tickets went on sale to the public. They were snatched up within a few hours.

In order to avoid financial crisis, the organization had to strategize the number of fans and personnel allowed at one point in the stadium. Staying under maximum capacity was made possible by having a limited grounds crew, no camera workers, no interns, and no unnecessary people in the stadium. In-game entertainment between innings, a major part of minor league baseball culture, is absent this season. The Patriots’ usual emcee is not there to entertain fans, and the team’s beloved mascots Sparkee and Slider are nowhere to be seen. 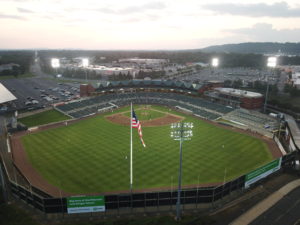 In terms of safety at the ballpark, tickets are scanned with no contact, and face coverings are required until fans take their seats. With general admission seating, fans are free to sit with their party but must stay at least one row and three seats away from others. With 500 people in a ballpark with a capacity of 6,100, it is easy to socially distance from others. “You’ve got the masks, social distancing, and [we’re] an outdoor facility,” McVerry explained. “I think we’re safer than a supermarket.”

“Though it’s a little different from your typical Somerset Patriots game, you sit there, you have a cold beer and a hot dog just relaxing and enjoying baseball in the summer,“ McVerry said. “I can’t tell you how many times I’ve been stopped here at the ballpark by fans who thank me and thank the organization for what we’re doing… we’re providing them with a fun night out.”

The Patriots have also hosted drive-in movies in their parking lot, as well as show movies on the stadium’s jumbotron while having fans socially distance on the playing field. Additionally, they host youth baseball camps at the ballpark during the day.

“We’re catering to guys who don’t have opportunities,” Hunton explained.

Even Jon Hunton is being provided with opportunities by SPBS, as he has been given his first managerial experience.

“I’m definitely having fun and enjoying it, I just wish it would last longer,” Hunton said with excitement. Continuing, “[but] the whole stem of this was giving back the community, giving back to the fans, providing entertainment and also giving players an opportunity that they might never have had.”