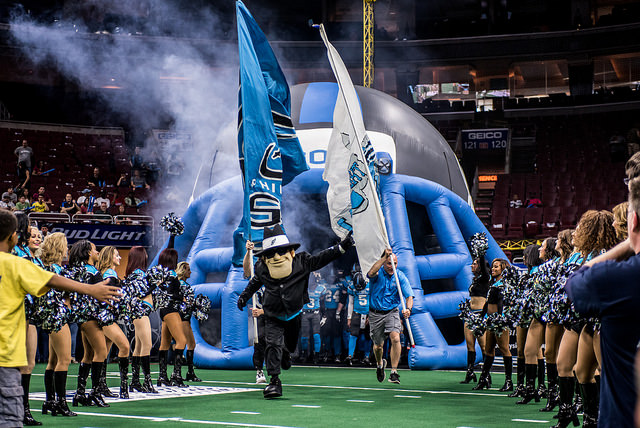 PHILADELPHIA – Football is a game of survival of the fittest.

The Philadelphia Soul are definitely winning that game as they escaped with a 69-67 win over the Cleveland Gladiators at the Quicken Loans Arena on Saturday night.

With their 4-0 record, the Soul maintain the only perfect record in the Arena Football League with 10 games to play in the regular season. This win did not come without some struggles.

Cleveland and Philadelphia traded lead changes throughout the first quarter but the Soul managed to lead after 15 minutes, 21-20.

Heading into the half, the Soul led 41-34 and never relinquished the lead moving forward.

However, late in the fourth quarter, Cleveland (1-4) threatened to steal the game in the waning seconds.

With the Soul leading 69-54, Brandon Thomkins returned the ensuing kickoff for a Gladiators touchdown to close the gap. After a successful onside kick attempt, the Gladiators quickly scored again to cut the lead 69-67 after a failed two point conversion.

Once the Soul regained possession, a steady dose of running and throw away passes were able to run the clock out.

Even with the win, Soul head coach Clint Dolezel was not too pleased with the teams performance but was at least satisfied with another victory.

“Tonight was not one of our best performances, but a win is a win,” Dolezel said. “We have some injuries to attend to and some improvements to make on both sides of the ball if we want to continue our championship run this season.”

A championship run seems to be in the cards for quarterback Dan Raudabaugh. He had another stellar evening by completing 14 of 24 passes for 245 yards and eight touchdowns.

With those eight touchdowns, Raudabaugh now leads the league with 23 touchdown passes on the season.

Wide receiver Darius Reynolds took the spotlight for the receiving core by reeling in five catches for 120 yards and four touchdowns.

On May 13, the Soul will return home for the second matchup with the Baltimore Brigade as they look to further extend their lead for first place in the league.

Nick is an NFL Analyst at DoubleGSports.com as well as the Philadelphia Soul Beat Writer.

What we learned about the Eagles from the 2017 draft
Predicting the Eagles Opening Day Roster
Posting....