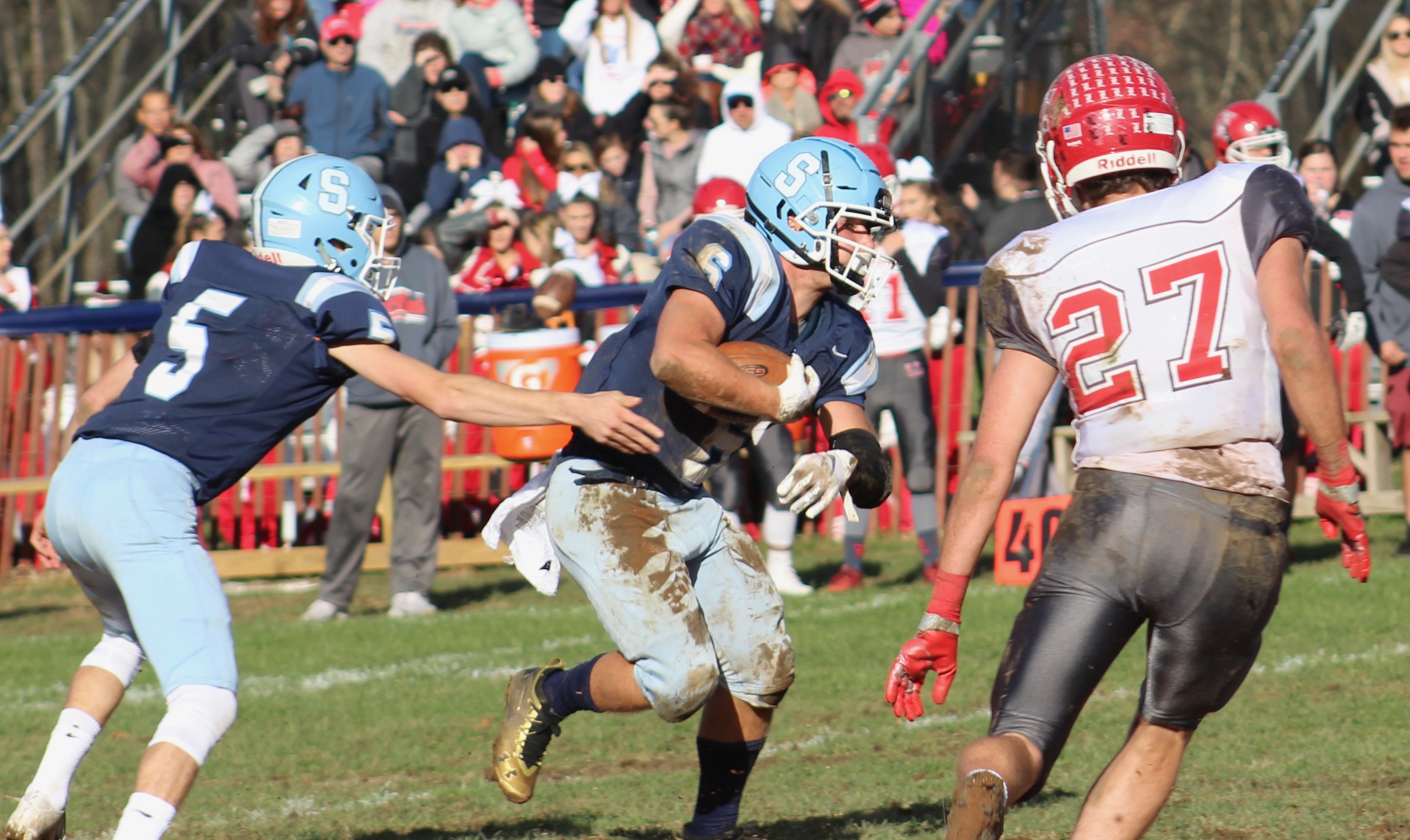 The Sparta Spartans (8-2) offense came out firing on all cylinders in the first half against the Lakeland Lancers (8-2) in the North 1, Group 3 playoff opener at Richard S. Cassells Memorial Field (Sparta High School) on Saturday afternoon.

Coming off a dominating 199 yard and three touchdown performance versus Morris County on October 27,  junior running Austin Castorina carried that momentum early on taking a handoff and exploding through the hole for a 54-yard touchdown run down the left sideline a minute and 10 seconds into the contest.

“Every game is so important for us to get momentum right away because you don’t want to be playing down,” said Austin Castorina. “After the Ramapo game we found a way from the start where we like to go up and huge for us. Early on a I knew they were going to pack the box and all week in practice bouncing out. I saw they we’re going in and read the lineman pinch in and did my thing.”

After the Lancers were forced to punt, Castorina continued prove unstoppable on the ground combined with the passing efficiency of senior quarterback Kenny Oelkers. On a second down play from the 12, Oelkers capped off a 10-play 90 drive that chewed up almost four minutes of the clock lofting a touchdown pass to wide receiver Ben McDonald in the left corner of the end zone.

The ball kept bouncing the Spartans way in the second quarter on a fourth and six at the 49-yard line where punter Reed McCall bobbled the ball but managed to recover and rumble seven yards to pick up the first down. Facing another fourth down situation at the Lakeland 31-yard line, Oelkers connected on a scoring pass to wide open Will Cisko down the left sidelines with 6:43 remaining in the second quarter. In the first half Castorina rushed 16 times for 141 yards while Oelkers completed 9 of 11 passes for 129 yards.

Sparta Head Coach Frank Marchiano on the team’s performance in the first half, “To me a good team always comes out of the gates fast. Running, throwing, offensive line grinded and Austin running hard. Austin is a tough kid who can makes plays up the middle, bounce, make people miss and stiff-arm that he actually does well.”

“In my mind that was the play of the game because that gave us momentum and switched the field. I wish I could say it was actually a designed punt fake but he (Reed McCall) made some people miss. If you want to advance in the playoffs and you can’t get a yard you shouldn’t be there in the first place.”

Down 21-0, Lakeland refused to go away responding with a 9-play 64-yard drive as quarterback Mike McKay launched a 34-yard touchdown pass to wide receiver Chris Trentacosta with 4:27 on the clock. The Lancers sustained that confidence heading into the third quarter as Jude Padovano returned the opening kickoff to the Sparta 25. McKay quickly gained 17 yards on the QB keeper. On third and goal from the seven, McKay hooked up with Ryan Sullivan on a score with 10:27 left.

Lakeland had a couple of opportunities to further cut into the Spartans lead but Sparta’s secondary stepped up with a couple of big plays starting with Tucker Hastings picking off a McKay pass at the Spartans 21 and Brayden Jansen knocking away a pass by McKay in the end zone. However, the Lancers managed to slice the deficit to 21-16 on a safety when a high snap sailed over McCall into the end zone with 2:29 remaining.

“We stunk in the third quarter, you don’t have to sugar coat it and we did not play well offensively,” Marchiano said. “Our defense got some big stops there and bailed us out there. As soon as your defense starts making plays your offense catches on and got the job done in the fourth.”

After a short punt of 11 yards into a stiff wind in the fourth quarter, Sparta capitalized on the field position at the Lancers 18-yard line. Taking advantage of a pass interference call assessed against the Lakeland defense, Castorina barreled in from two yards outs with less than 10 minutes to go.

The Spartans defense continued to be relentless registering a pair of sacks. Castorina salted the victory away and spectacular 205 yards on 32 carries day with a nifty 15-yard touchdown run down the right sidelines with 4:30 remaining.

Next up for Sparta is a sectional semifinal showdown with number 1 seed and undefeated Ramapo (10-0) on Friday November 9. In the first game of the regular season, the Spartans narrowly lost to the Green Raiders 21-18 at home.

“The mindset is to focus on the things you did in Game 1 and improve on things you didn’t do well,” said Marchiano. “That is why you play high school football and two teams’ for two and half hours going out there.”