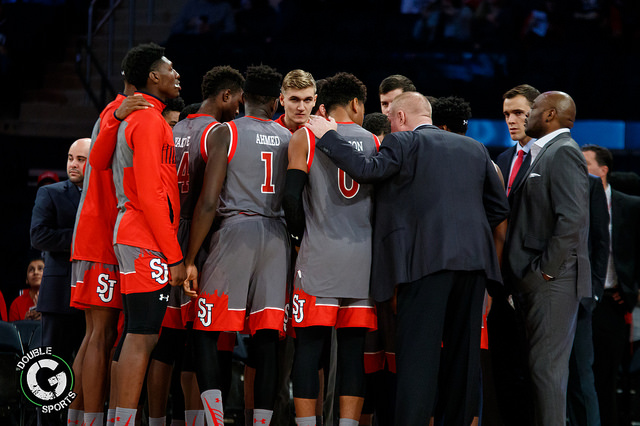 St. John’s went to play its second BIG EAST road game within three days, against the Georgetown Hoyas on January 9, but weren’t able to pull themselves together and were blown out, 83-55, at the Verizon Center.

St. John’s (8-10, 2-3 BIG EAST) made only 27.6 percent of its tries from the floor, including a 5-of-30 effort from beyond the three-point arc. Shamorie Ponds scored a team-high 12 points, leading the Red Storm, along with his 17th-straight game in double figures. Marcus LoVett, who earned a spot on the BIG EAST Weekly Honor Roll after averaging 27.5 points per game in the team’s last two games, put up 10 points.  Bashir Ahmed also added in 10 points for the Johnnies. L.J. Peak was the leader for Georgetown (9-8, 1-4 BIG EAST) with 16 points.

The Red Storm took a 12-8 lead after the game’s first media timeout. Kassoum Yakwe scored five points, which contributed to that. The Hoyas fought back with a 8-0 run, bringing on a 16-12 lead that eventually extended that advantage to as many as eight, 38-30, before the end of the first half.

The Red Storm cut the Hoya’s lead down to four, but Marcus Derrickson nailed a three on Georgetown’s final possession of the half, taking a seven-point lead, 44-37, into half time.

Down by eight, with less than five minutes into the second half, St. John’s saw Georgetown bring out a 16-0 run to lead again by 24, 63-39, with 9:37 left on the clock. The Hoyas continued to lead the game, with as many as 30, with the Johnnies not being able to catch up for the remainder of the game.

St. John’s will return to action on Saturday afternoon, hosting the No. 3/3 Villanova Wildcats at Madison Square Garden.  Tip-off is scheduled for 12 p.m. on FS1 and 570 AM WMCA.