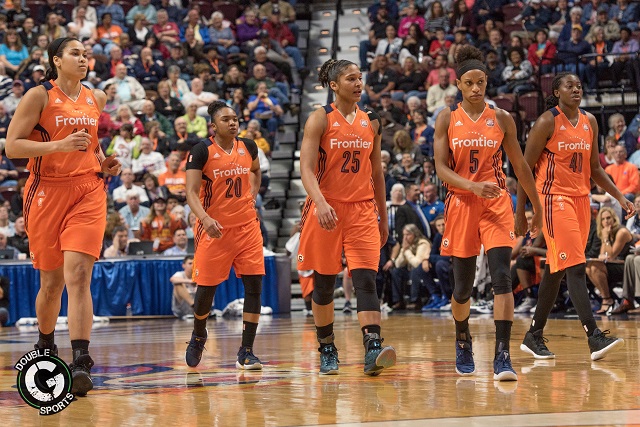 On a night Mohegan Sun Arena celebrated 15 years of the Connecticut Sun, the current roster continued to prove they are ready to carry the torch.  The team came together under the performances of Jasmine Thomas and Alyssa Thomas, as well as Jonquel Jones to keep a late Seattle surge at bay.

The Sun return to the win column after the Dallas Wings snapped their five-game winning streak on June 25th.  As a franchise, the Sun have had their ups and downs.  The team was birthed when the Orlando Miracle team was purchased by the Mohegan Native American Tribe. Since its first season in 2003, the Sun have posted a winning record (.500 or better) in 11 of its 15 seasons.  The Sun made six straight playoff appearances from 2003-2008.  The Sun would return to the playoffs in 2011, but have not been back since.

The last two seasons, Connecticut has finished under .500 and missed the playoffs.  However, the work the young team and head coach Curt Miller have invested is beginning to show dividends.

Despite losing franchise player Chiney Ogwumike to injury for a second consecutive season, Miller has a band young stars stepping up.

In her second season, Jonquel Jones is averaging 15.1 points and 12.1 rebounds per game. She tallied her eighth double-double against the Storm, and her third straight.  Jones was acquired via trade with the Los Angeles Sparks on the 2016 WNBA Draft Day.  So far, the trade has worked well for the Sun.  Jones is an offensively versatile post player without losing an physicality on the boards.

In her first year of eligibility for an All-Star game, the George Washington University product finds herself top five in the Eastern Conference after early fan voting returns. When asked if she felt her grandma promotional videos were helping, she laughed and gave credit to her Connecticut Sun Media Team, “It’s a lot of fun, we have to give props to the marketing team, they’ve [done] a good job.”

The team is settled by six year WNBA veteran Jasmine Thomas. On Friday, she set a new career high in points again.  At the ripe age of 28, Thomas is one of three 198o’s babies on this young squad. She posted 29 points while going on 12-of-16 for the night.  She bested her career high by 6 points, previously set against New York on June 23.

Five year veteran Shekinna Stricklen was another huge piece for the Sun win over Seattle.  She posted double digits (14) in points for the sixth time this season, including a huge shot late in the game to stall Seattle’s fourth quarter run.

Although Stricklen considers herself a shooter, she felt the team ball movement made that shot, and others possible.  “It’s just a team thing, we moved the ball very well before … people don’t really know who’s going to take the shot.”

Four Sun players reached double digits, and every player that saw minutes scored at least one point.  This is a Sun team that continues to deal with a lot of injuries,  as well as players working up to 100% fitness.

Coach Miller has asked a lot of Alyssa Thomas and others, and they have stepped up.  When speaking of Thomas facilitating the offense, Miller said, “Alyssa Thomas has just excelled with the unintended consequences of our injuries and moving her to [the post]. She turning out to quickly prove she’s one of the elite [power forwards] in the league.”

When players like Rachel Banham and Chiney Ogwumike return healthy, it is expected that the Sun will return to the playoffs.  Once the consistent winning of yesteryear returns, this squad will be a player or two away from its first championship in franchise history.

Connecticut returns to action against the Indiana Fever (7-7) this afternoon.  The Fever in the post-Tamika Catching era sit in third place in the Eastern Conference and 7th overall.  Right now, that is good enough to get them into the playoffs.  The Sun sit behind the Fever in the East and overall based on head-to-head results. The Fever defeated Connecticut 81-79 on May 20th.  Today’s late afternoon match-up is not a must-win, but Connecticut should treat it as such.  A win in Indiana would do a lot to show the team is a serious contender now, not just in the future.

For that to happen, the Sun will need another solid performance from Jasmine and Alyssa Thomas, as well as Jonquel Jones. Look for bench players like Rachel Banham and Alex Bentley to contribute more.  As all teams in the league suffer injuries and routine fatigue, points off the bench will eventually decide the top eight teams that make the playoffs.

The Sun will have a few days rest before returning to action on the road against the San Antonio Stars. Connecticut returns home on July 8th as they host Eastern Conference leaders, the Washington Spirit.

Japanese sensation Kairi Hojo signs with WWE, confirmed with several others for Mae Young Classic
The Case for Carmelo Anthony to Remain a Knick