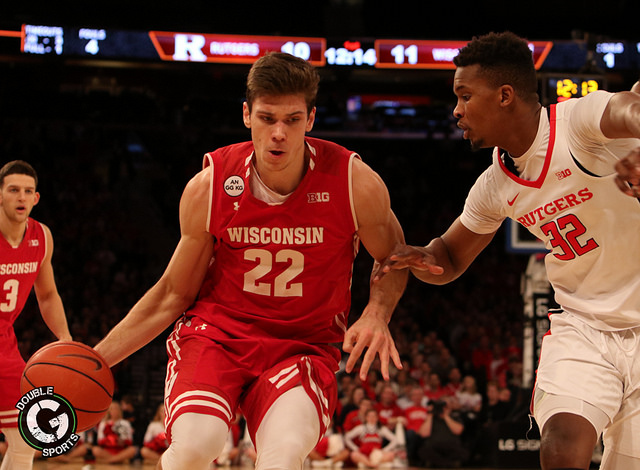 Super Sweep For Wisconsin at The Garden For Big Ten Saturday

It didn’t start out super, but Wisconsin did get a super sweep on super Saturday. Ironically, both teams needed overtime to pull out wins.

The number 15 ranked Badgers didn’t shoot the ball all that well, but still managed to defeat Rutgers 61-54 at Madison Square Garden. Wisconsin, down nine with three minutes to play, made big shots (and, more importantly, big free throws) when it needed to and Rutgers failed to close, allowing the Badgers to emerge with the win.

Koenig finished the game 2-of-13 from the floor (2-of-10 from three-point range). Senior Nigel Hayes, averaging 15.0 points in his previous 14 games, was held to seven points.

The seniors, however, came up huge in the overtime period. Hayes had two big buckets, including an and-one, and grabbed a big offensive rebound off of a Happ missed free throw. Koenig finished the game with 10 points and converted four critical free throws down the stretch to close out the win.
Both teams struggled with shooting all game long. “Nobody could really throw it into the ocean for most of the game,” Koenig said afterward.

Corey Sanders (15 points on 6-for-17 shooting) and Nigel Johnson (13 points on 3-for-12 shooting) scored in double figures for Rutgers, which shot 29 percent in the second half and in overtime to fall to 12-10 overall and 1-8 in Big Ten play.

“Obviously they try and make things hard on you and if you don’t shoot well, then you can be in these types of games… we just had to keep having confidence that one of them was going to go down,” Wisconsin coach Greg Gard said.

The Badgers Prevailed Over Ohio State In Overtime

“To walk in to it and actually participate in a game, a meaningful game, it was a special moment for them and I’m just happy to be here with them and be part of it too,” head coach Tony Granato said.

The win finished off a great day for the Badgers at MSG. Earlier in the day, the Wisconsin basketball team made a furious comeback late in regulation, then went on to a 61-54 overtime win over Rutgers.

Wisconsin sophomore goaltender Matt Jurusik got the start and was fantastic. Matt Jurusik turned away 27 shots and held the second-ranked Ohio State scoring offense to only two goals, both with extra men.

For the Badger men’s hockey team, junior Cameron Hughes scored the game-winner 2:58 into the five-minute overtime period after collecting a loose puck in front of the OSU goal. Hughes made a diving effort in front of the crease to poke in the puck after Matt Ustaski forced Buckeyes’ goaltender Christian Frey out of position. The secondary assist went to Jake Linhart on Hughes’ fifth goal of the year.

“I thought we bounced back great and had jump, the bench had life, we still believed in ourselves and that’s the bottom line,” Hughes said. “You always believe in yourself and good thing happen and we were lucky enough to get the win.”

The game was a homecoming of sorts for Wisconsin coach Tony Granato, who began his NHL playing career in 1988 with the New York Rangers.

“(Playing at MSG) was a special moment for (the players) and I’m just happy to be here with them and be part of it too,” Granato said. “This building meant a lot to me. When you get your first crack in the NHL with an original six team, you get to play in New York in front of these fans, I was pretty lucky. To come back here a long time after I was here, it’s very special.”

The Wisconsin alums and fans enjoyed two thrilling games. Once again , the Big Ten Super Saturday at the Garden was a massive success.