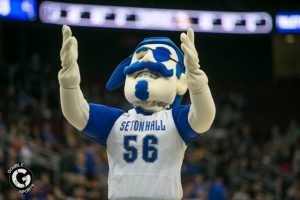 The off-season for the Seton Hall has been an active one. After yet another successful recruiting class, Angel Delgado announced he would return for his senior season. Seton Hall received even more good news on Tuesday.

Taurean Thompson, who played for St. Anthony’s and legendary coach Bob Hurley, is returning to New Jersey. The 6’10” forward will be transferring from Syracuse to Seton Hall and will be sitting out the 2017-2018 season. Thompson is the sixth player on the roster to hail from either New York New Jersey.

“Taurean is a terrific addition for the Seton Hall men’s basketball program,” Seton Hall coach Kevin Willard said. “He is long and athletic with good post skills and the ability to step out and shoot.”

“We will work with him during his sit-out year to further his development both on the court and in the classroom and expect him to be ready to compete for Seton Hall next season.”

Thompson comes to The Hall from Syracuse where he played his freshman year under another legendary coach in Jim Boeheim. Thompson, who played Brewster Academy after playing for St. Anthony’s, averaged 9.2 points and 3.8 rebounds in his lone year with the Orange. His stock improved with his play during the NIT. Thompson averaged 15 points and eight rebounds in two games against UNC Greensboro and Mississippi.

The addition of Thompson brings Seton Hall a big body that could be the heir apparent to Delgado when he graduates in the spring. While the Pirates return 90 percent of their scoring and three 1,000 point scorers for the 2017-2018 season, Seton Hall will have to begin thinking about the future.

Names like Angel Delgado, Desi Rodriguez, and Khadeen Carrington will leave South Orange, and Seton Hall will have to start thinking about how Seton Hall will look for the 2018-2019 season.