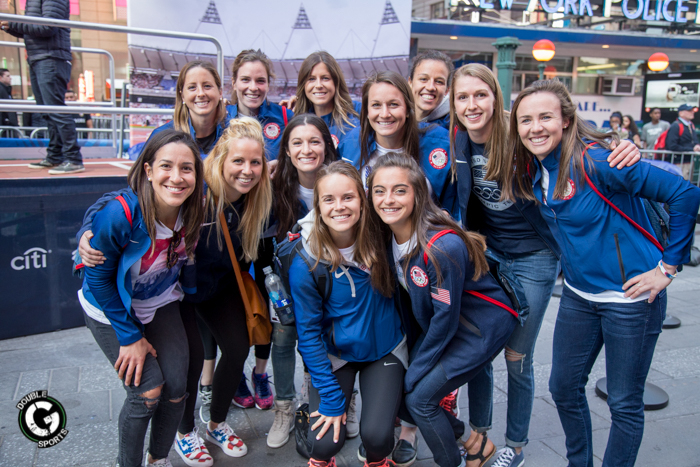 Team USA and its sponsors kicked off the 100-day countdown to the August 5 Rio games with a huge event in New York City’s Times Square Wednesday.

The festivities included a speech from First Lady Michelle Obama and the unveiling of Team USA’s closing ceremonies outfits and the naming of “Live Forever” by The Band Perry as the Olympic team’s official song. The First Lady also announced an initiative with the U.S. Olympic Committee to help introduce the youths of the nation, to new sports.

Michelle Obama developed the Let’s Move program to address the problem of Child Obesity, hailed the U.S. Olympians as role models and joined in demonstrations of basketball and fencing. The First Lady gave an amazing speech.

“The Olympics are also about inspiring young people to truly great and active,” Michelle Obama repeated a few times.

The sports spectacular was open to the public. Fans were able to watch demonstrations of everything from fencing to wrestling. Fans even had a chance to meet Team USA athletes and get some autographs. Team USA took over Times Square.

Among the 75 Team USA athletes appearing at the event were wrestler Jordan Burroughs, a 2012 Olympic gold medalist, and David Boudia, a diver who has competed in two Olympics and took home the gold in 2012.

Kelley O’Hara, who won gold at the 2012 Olympics as a midfielder on the U.S. Women’s Soccer team, was there as well. Also appearing were nine “Team USA Legends,” including Shawn Johnson, Shannon Miller, Rowdy Gaines and Carl Lewis.

Past Olympians Carl Lewis , Nastia Liukin and defending gold medal diver David Boudia traveled to the Empire State Building, which was lit up in red, white and blue. The Museum of Modern Arts, held a reception to honor both the past and current members of Team USA.

Many spots on Team USA won’t be finalized until just before the Opening Ceremony, but still with 100 days to go, TEAM USA has a lot in store for us at this year’s Rio games.

Miye D’Oench Signs with New York Riveters
2015-2016 Knicks: Help Still Needed To Compete But This Season Was a Building Block