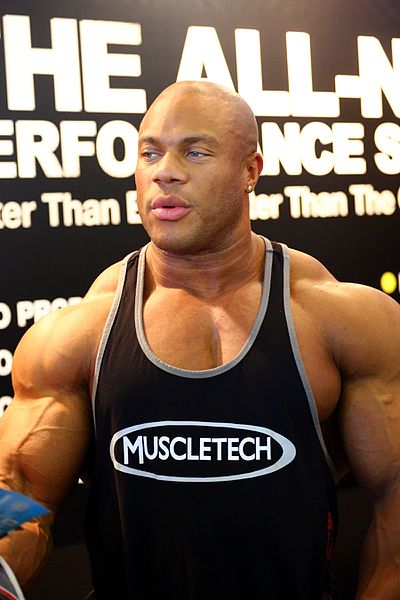 Photo Courtesy of Wikimedia Commons: This file is made available under the Creative Commons CC0 1.0 Universal Public Domain Dedication.

Dwayne “The Rock” Johnson and business partner Dany Garcia are producing a Phil Heath documentary. Heath is best known as being a seven-time Mr. Olympia winner and is coming out of a two-year hiatus to potentially clinch his 8th win of the prestigious bodybuilding title. The documentary will focus on Heath’s comeback.

A press release from Johnson and Garcia’s Seven Bucks Production website states that the Phil Heath documentary (The Untitled Phil Heath Story) will “unveil the extraordinary life story of seven-time Mr. Olympia, Phil Heath, as he rises through the ranks, battles the scrutiny of the media, and takes on bodybuilding’s scariest foes. All while standing on the brink of becoming the greatest Mr. Olympia champion to walk the earth.”

Johnson adds, “Phil is one of the greatest bodybuilders of all time and when it’s all said and done, he could become the greatest to ever step on stage. For good reasons, his nickname is ‘The Gift’ and his bodybuilding surname is ‘the Dream Killer.’ This is going to be fun to produce. I can’t wait.”

“As a fellow bodybuilder, I am endlessly in awe of Phil’s abilities and unprecedented career. Not only is his physique iconic but his work ethic, mental persistence and relentless commitment are simply unmatched in the sports,” says Garcia. “I am excited to be collaborating with Phil, alongside our partners, to tell his story with conviction as well as to bring an authentic glimpse into his world as he cements his legacy.”

Johnson and Garcia will executive produce the feature via Seven Bucks Productions, as well as Phil Heath and Adam Scorgie for Score G Productions and Super Channel.