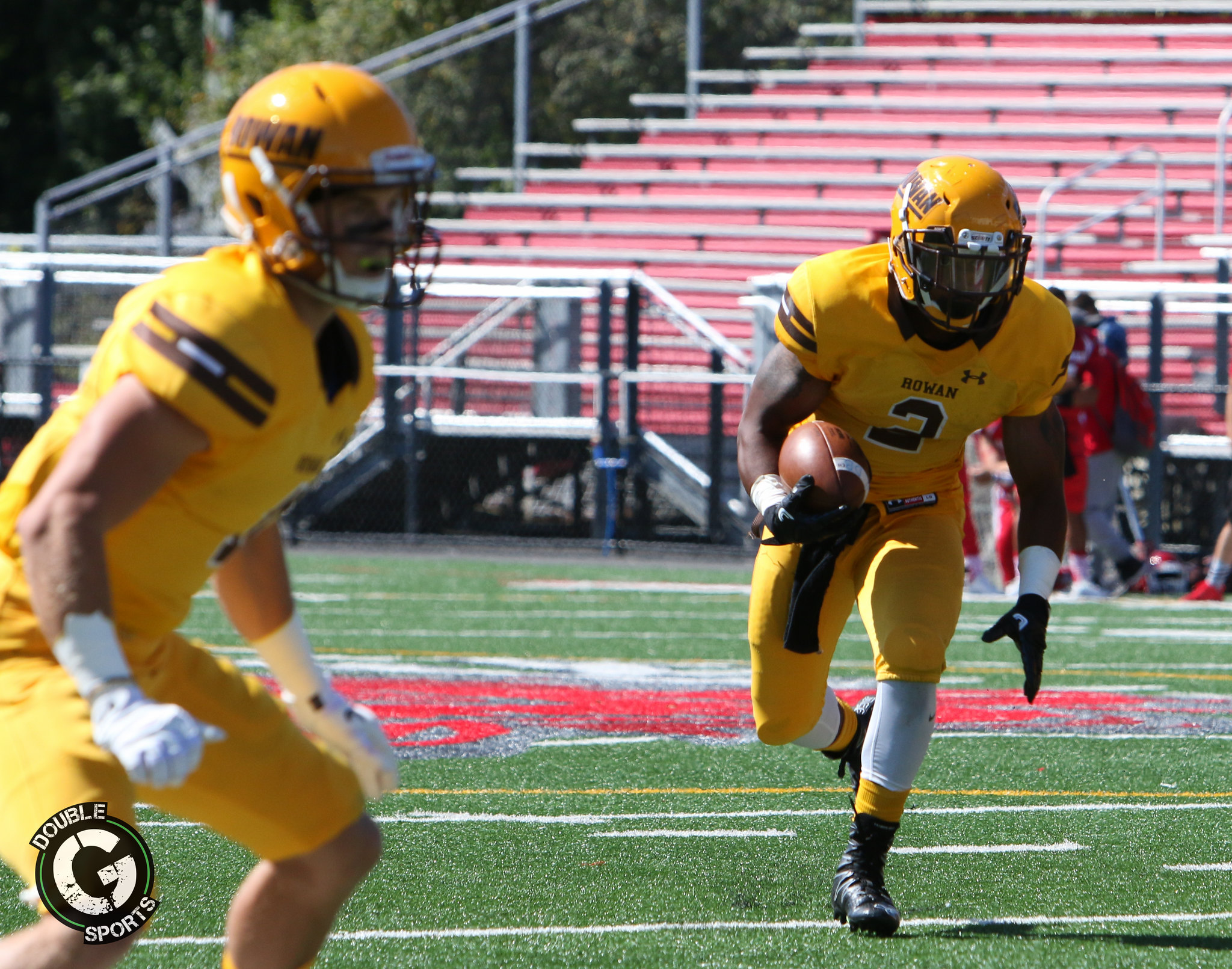 This Week In NJAC: October 11th

The New Jersey Athletic Conference kicked off their first week of conference play with a bang, to say the least.

Week 5 of the 2019 New Jersey Athletic Conference football season featured some huge near-upsets, first wins, and much more. From a near-upset by Rowan to TCNJ’s first official win of the season, there was no shortage of drama throughout the weekend.

In the third edition of “This Week In NJAC Football”, we take a nose-dive into the craziness that is NJAC football and review some of the biggest stories of last weekend, as well as a preview of some huge games on tap for Week 6.

Rowan Nearly Pulls Off The Upset Of The Century

Few could’ve predicted that the Profs would actually have a shot at defeating such a powerhouse program like the Wesley Wolverines.

That prediction may have almost come to fruition last Saturday, as a late fourth-quarter stop by Wesley saved their perfect season, as they came out with a 21-20 victory in Dover.

Wesley wasn’t as explosive offensively throughout the game as they are typically known for, as they only held a 21-7 lead at the end of the third quarter, with 14 of those coming in the fourth quarter. However, sophomore quarterback Matt Husini 26 yard touchdown pass to senior wide receiver Nick Grosso would cut the Wolverines lead down to seven as it became a 14-21 game with 8:11 left to play.

With the Wolverines backed up at their own 9-yard line on the ensuing drive, the Profs forced a  fumble on senior quarterback Jon Mullin, as senior defensive lineman Luke Gensie would scoop up the loose ball for a huge touchdown. Unfortunately, a missed extra point by freshman Jake Hurler would come back to haunt them in a big way with Wesley holding a 21-20 lead with 7:36 remaining.

After a turnover on downs by Wesley, there was still hope for a game-winning drive by Rowan. However, the Wolverines would step up defensively and make a key 4th down stop as Husini’s pass to Grosso would fall incomplete with 2:03 remaining in the game, allowing the Wolverines to run out the game clock for the win.

Despite the tough loss, there is much to be excited about down in Glassboro. The Profs showed resilience and character to come back against a strong Wesley squad that is considered one of the best teams in Division III right now. Rowan also did a good job of finally getting the running game going with junior running back Messiah Divine, who finished with 118 yards on 26 carries. If the Profs can put up a similar effort against an up-and-coming Kean University squad, they may be able to pick up their first win of the season.

However, the Profs will need to pass the ball much better then they have all season, as Mike Husini has only thrown for over 200 yards one time this season. However, with the tougher part of their schedule behind them, the Profs may see more vulnerable defenses ahead.

TCNJ Picks Up Their First Win Of The Season

It’s been a rough start to the season for The College of New Jersey, but going 1-0 to start NJAC play is a nice way to get back on track.

Junior quarterback Andrew Donoghue scored two touchdowns, one through the air, as well as a late fourth-quarter rushing touchdown to help edge the William Paterson Pioneers on their homecoming game, 17-14

Despite the effectiveness of the Pioneers ground attack with freshman running back Terrique Reddick leading the charge, the Pioneers struggled to pass the ball as freshman quarterback Geroge Crespo threw for only 124 yards on 9 of 19 attempts and two interceptions.

However, the Pioneers offense would respond quickly as a 67-yard pass by Crespo to freshman wide receiver Matt Clarke would set up a 10-yard touchdown for junior running back Marcel Mason, and junior kicker Mahadye Painhade would convert on an extra point to tie the game at 7.

However, the Pioneers had their chances to win the game, but a fumble by junior running back Marcel Mason at TCNJ’s 42-yard line with 50 seconds remaining in the game all but ended all hope for a Lions comeback.

Defensively, the Pioneers held up well against the Lions offensive attack in the first half after letting up an early score. Sophomore linebacker Bryan King forced a fumble in the that was recovered by junior defensive back Ra’Keem Bennett, who dashed into the endzone for a 29-yard touchdown. Oretel’s PAT conversion made it a 14-7 game.

The script flipped completely in favor of TCNJ in the second half. Led by senior defensive back Xaiver Santos, the Pioneers were shut down offensively as the only managed 74 yards in the half. However, the momentum didn’t truly shift until late in the third quarter.

Following a field goal on their previous offensive possession, Donaghue would finally get this TCNJ offensive back in the endzone late in the third quarter, scoring on a 4-yard touchdown run. With PAT being converted, the Lions grabbed their first lead of the game, 17-14. This touchdown drive followed up a huge fumble recovery by senior defensive lineman Erik Graham that gave Lions that gave them a short field to work with.

The Lions defense would again come up big late in the game, as a fumble by junior running back Marcel Mason at TCNJ’s 42-yard line with 50 seconds remaining in the game all but ended all hope for the Pioneers.

The Pioneers will have a chance to redeem themselves this Saturday as they will take on Christopher Newport, and TCNJ will have a date with Ja’Quill Burch and the Red Hawks on that same day.

My Pick in BOLD, all games held on Saturday

NJAC Players of The Week (Week 5)