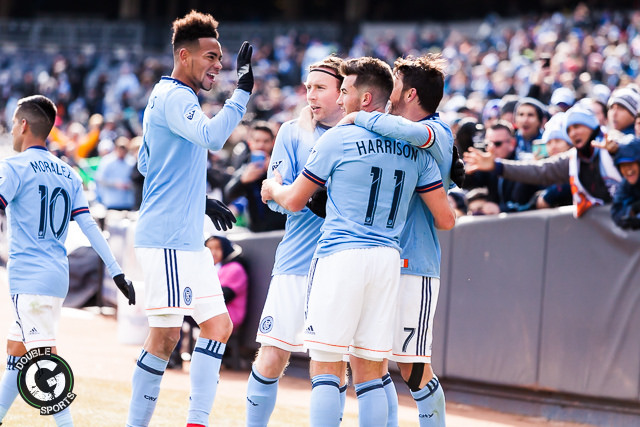 On a beautiful day in the Bronx, NYCFC took on their rivals from Philadelphia for the second time this season. For 80 minutes, it looked as if NYCFC wasn’t going to come away with three points. But, leave it to NYCFC’s two central defenders to led a miraculous comeback to beat the Union 2-1.

There wasn’t much to speak of between the two sides for the majority of the first half. The only glimmer of action occurred when Alexander Ring (back from his one-game suspension) fired a rocket off of the post in the 32nd minute.

NYCFC did have one more chance before the halftime whistle, and that came courtesy of David Villa. Following a nifty move from Jack Harrison by the corner flag, Villa fired a Harrison cross straight at Union goalkeeper Andre Blake. Blake parried the shot away thus alleviating the NYCFC pressure on the Union goal.

Second half was similar to the first, as the action was slow to develop. Everything changed, however, when Ronald Mattarrita returned from his injury in the 60th minute, who entered in place of a woeful Miguel Camargo who looked lost on the wing.

After a few spurts of pressure, NYCFC fell victim to the Union counterattack. After a nifty move, the Union’s Fafa Picault slotted home the opener of the match in the 69th minute to give the visitors the lead.

Following the Picault goal, it was evident that NYCFC was having one of those days where nothing went their way. Union goalkeeper Andre Blake was phenomenal, and the boys in blue couldn’t get anything past the Jamaican.

But, NYCFC found their saving grace through two unlikely heroes, their two centre-backs.

In the 80th minute, off a corner, Luxembourg-international Maxime Chanot headed home a cross to even things up at a goal apiece.

Five minutes later, off of another corner, Peruvian centre-back Alexander Callens, who nearly came off the field due to a shoulder injury in the first half, pounced on a rebound in the box to give NYCFC a 2-1 victory over their rivals.

Simply put, it was one of those days for NYCFC. Blake was on his game for the Union, and nothing was heading into the back of the net. Most teams in the MLS would not pull out points from these type of matches. However, elite teams find a way to get points even when things aren’t going their way.

NYCFC proved that they could grind out results. It is matches like this one that the team can look to going forward. But, if NYCFC wants to establish themselves as an elite team, more consistent results would work wonders for the Bronx boys.