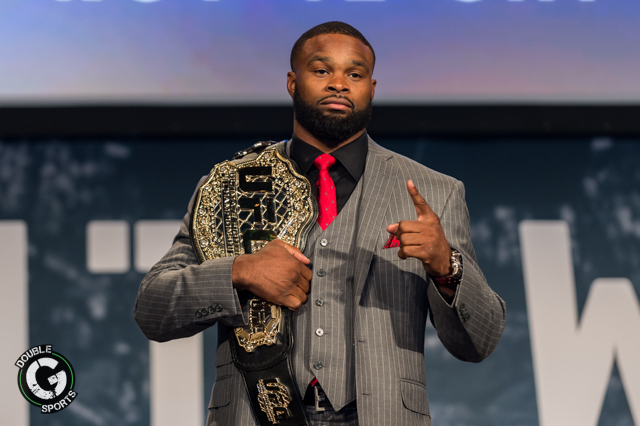 With a fight like Jon Jones v. Daniel Cormier on the card, you had a feeling the UFC would go big or go home. They decided to make UFC 214 a card for the ages. After announcing Cyborg v. Evinger for the UFC Women’s Featherweight Title, the company added one more match. Tyron Woodley (17-3-1), the UFC Welterweight Champion, will put his title on the line against Demian Maia (25-6). MMA Fighting confirmed the news earlier tonight.

Woodley himself became the first of the two to promote the fight, via Twitter.

Woodley (18-3-1) has been on a role after defeating Robbie Lawler for the title at UFC 201 in 2016. This is a very refreshing fight for him, as he has faced Stephen “Wonderboy” Thompson twice in a row. The first fight ended in controversy at Madison Square Garden at UFC 205. It was a majority draw after the referee couldn’t figure out a winner at first. The second time was a lackluster affair at UFC 209.

While fans would love to see the trilogy fight between Woodley and Thompson so they can “get it right”, patience is a virtue. Not everything can work as smoothly as a Nate Diaz / Conor McGregor fight.

Demian Maia is not a bad fighter for Tyron Woodley to go against either. He has won seven fights in a row since May 2014. The 39-year old is looking to prove he belongs in the title picture. The last opportunity he had for a UFC title was against Anderson Silva in 2010.

UFC 214 is shaping up to be a stacked card. I can’t help but think it was planned just in case something happens before the Jon Jones v. Daniel Cormier fight. Regardless, we are all thankful for it. UFC 214 will take place July 29th at the Honda Center in Anaheim, California.