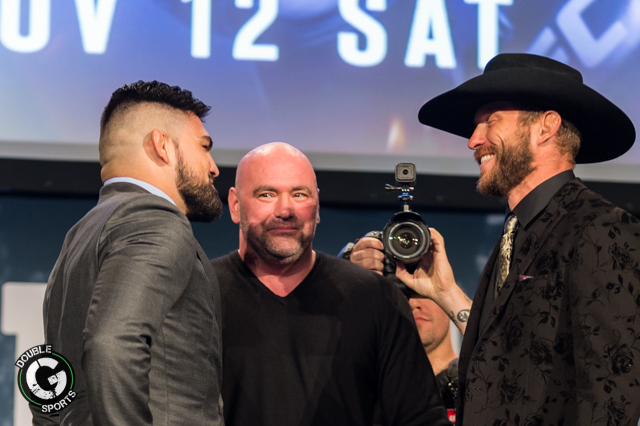 The early weigh ins for UFC 205 are a wrap with some unfortunate news in the outcome.

UFC Early Fight Pass prelim headliner Thiago Alves, who was scheduled to make his lightweight debut, hit the scales Friday morning at 162.6, six pounds over the 156-limit. In fortunate circumstances with the weigh in procedure, his opponent Jim Miller got news of this and re-hydrated before stepping on the scale at 157.6. Since Miller weighed in within 5-pounds of Alves’ missed weight, as per NYSAC rules, the fight is still on.

Unfortunately for Donald Cerrone and Kelvin Gastelum, who were scheduled to face off in a welterweight bout on the UFC 205 mega-PPV main card, circumstances were not on their side. After stepping on the scale and making weight at 170.4, Cerrone came out to the media notifying them that Gastelum was not making weight and was currently at 178. Per NYSAC rules, since there was over a seven pound difference between the two fighters and Cerrone had already stepped on the official scale, the fight could no longer take place.

Gastelum tweeted out the news:

Due to time constraints, it is highly unlikely an opponent will be able to step in on short notice to fight ‘Cowboy’ in Saturday nights historical card.

All other scheduled bouts have weighed in for their respective weight classes, including the main event between UFC Lightweight Champion Eddie Alvarez and UFC Featherweight Champion Conor McGregor.