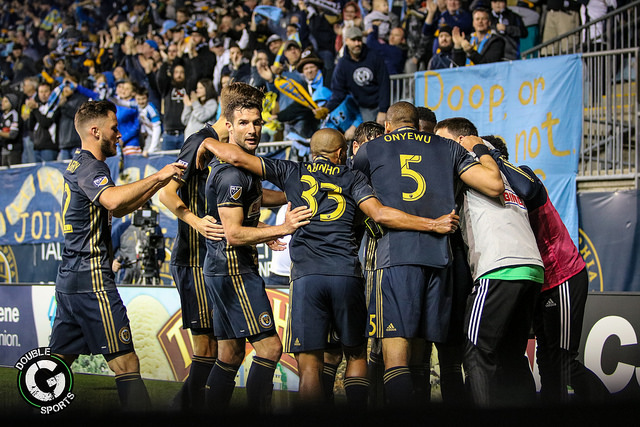 Saturday night at RFK stadium was a fork in the road for the Philadelphia Union. Do they start to reach their potential and build on the momentum of their 3-0 drubbing of the New York Red Bulls, or do they revert to their old winless ways? In the 39th minute when Harris Medunjanin hit a wobbling thunderbolt past Bill Hamid, one of those paths became extremely clear.

Not much changed for the Union in the ways of their lineup, but much changed in their composure and confidence. From the start of the game it was evident they were there to give DC a fight. CJ Sapong winning free kicks, Picault dribbling past the defense like he was playing FIFA, and in the middle of the first half Medunjanin showed his long range quality. After a tiki-taka like play down the sideline to gather the ball in the opponent’s final third, the midfielder received the ball from 30 yards out, picked up his head, took a touch, and whipped the ball with pace. Although Bill Hamid got to the spot the ball would be, the ball itself had other ideas as Medunjanin sent it knuckling in-between the DC keeper’s arms.

After sustaining the lead from late first half pressure, the Union players were calm, cool, and collected walking back to the locker room for halftime. Jim Curtin seemed to have lit an even bigger fire as the team came back swinging in the second half.

In the 48th minute Bill Hamid made an insane close range save on Picault to keep the game within one goal. The quality was showing in the teamwork and ability to work off of each other as a unit. Bedoya showed why he was captain as he worked to be an example of the focus and hard work it would take to see this game out.

In the 55th minute the best player on the field for DC United throughout the night – the spry midfielder Acosta was sent out with a direct red card after a late studs up tackle. The ref called the game very tight across the board and both teams should have been aware of this fact.

The Union would secure the game with the second goal of the game in the 64th minute. Oguchi Onyewu would score his first MLS goal of the season off of a curling corner kick. Onyewu made the perfect run to lose his man, was in the perfect spot 8 years from goal, and put the ball perfectly on his bald head to slide into the corner of the net.

It was easy pickins for the Union after that. Up two goals against a ten man team that was certainly deflated for the rest of the night. Fafa Picault also scored his first MLS goal showing his true potential on the field. Again his shot was like he was playing a video game as he picked up the ball at the corner of the box and curled it perfectly past Hamid to the upper 90.

This was a stunning display from both teams as Herbers joined the fun in the 88th minute. A low driven pass came to his feet at the top of the box and he redirected it in such a way that it swung over the DC keeper and hit the side netting.

With four players on the Union gathering their first goals of the season, it was a true team effort to put another rival away. Things have changed quickly within a seven day period. Two absolute drubbings of Eastern Conference rivals now leave the Union only five points from the playoff line. That sound you just heard was the relieved breath of safe Jim Curtin.