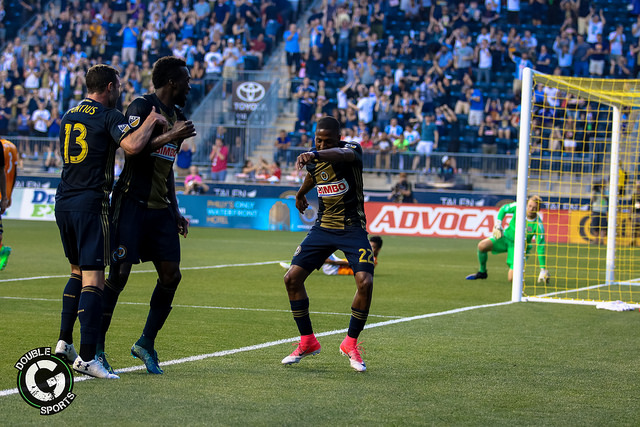 The amazing turnaround continues as the Philadelphia Union won their fourth straight game Saturday night against the Colorado Rapids. A flailing Real Salt Lake awaits them this coming Saturday which opens up a realistic possibility of five straight victories. The team has been on an absolute defensive tear giving up only one goal in the last five games.

I could say that I’m the Nostradamus of the Union after writing about the importance of Onyewu signing, or why it’s important to look at the positives of keeping a consistent coaching staff even in times of woeful form. But I digress as I am no clairvoyant, only a writer who has seen MLS go through some ridiculous flip-flop seasons where you should expect the unexpected.

Goals from CJ Sapong and Harris Medunjanin in the second half capped a record setting comeback – not for the lead gained but for the consecutive winning result. I cannot stress how normal this is in MLS but the Union in the first third of the season have simultaneously not won a game in a span of eight months, and broken their franchise record for consecutive victories with four. Previously the club had won three in a row on two separate occasions. With the same result they have no pushed their unbeaten run to six games, the Union record for unbeaten games is eight in a row.

With a penalty in the 67’ minute, CJ Sapong scored his eighth goal of the season which ranks third in the league in goal scoring behind Chicago’s Nikolic and Houston’s Erick ‘Cubo’ Torres. Medunjanin wasn’t going to let CJ’s penalty overshadow the night, as he whipped in a free-kick from 22 yards out in which Tim Howard didn’t even try to save. Leaving the glorious foot of Medunjanin, the ball careened and spun like a tornado eventually landing safely and untouched in the net in front of the Sons of Ben.

This team could go places, as they now have the seventh best PPG in the East and could leapfrog the Red Bulls and Columbus Crew SC with one more win into fifth place. Please don’t stop this wild ride Philadelphia, it has been fun so far!