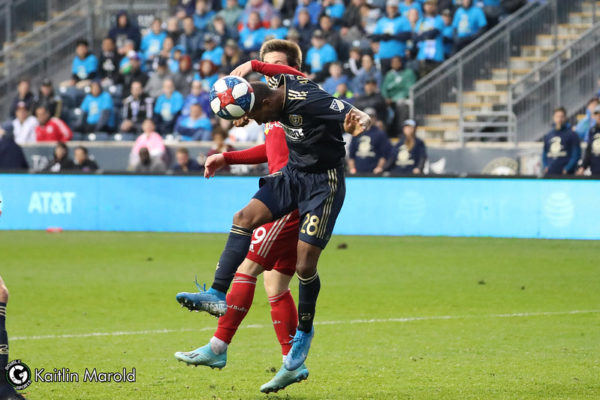 Chester PA: It’s win and move on, its what we had on Sunday afternoon from Talen Energy Stadium in Chester PA as the Philadelphia Union would host their first playoff game in 8 years as they took on their rivals the New York Red Bulls.

The Union & Red Bulls would split their two games during the regular season.

The Red Bulls would jump on the Union as they would make some costly mistakes as they would have a 2-0 lead in the 27th minute. The Union would answer back lead by the captain Alejandro Bedoya would get the crowd awake with his goal in the 30th minute.

The Union are back in it!

It's Ale Bedoya with a clinical finish to cut the Red Bulls' lead in half. #MLSCupPlayoffs pic.twitter.com/U6QdulRzSG

The Red Bulls would make the Union pay late in the first half as Union goalie Andre Blake would make his second costly mistake as they would score for a 3-1 lead at halftime.

Everyone inside Talen Energy Stadium had a very shocked and concerned look on their face thinking is this historic season for the Union could be ending. Not so fast, as the Union would show that fight they you have as a player in the city of Philadelphia and things would get very interesting.

The comeback would be complete by the Union as FAFA would score in the 78th and everyone at Talen Energy Stadium could not believe what they saw as the Union would not go down without a fight. This game would be tied at the end of the 90 Minutes and would go to extra time.

In the playoffs, when the game goes to extra time, there will be two periods of 15 minutes.

His cross-shot nestles in the back post and Philly have their first lead of the day! #MLSCupPlayoffs pic.twitter.com/eYF7nGS0iW

The Sold out crowd of 18,530 would see history as the Philadelphia Union would win their first playoff game in franchise history with a 4-3 comeback win over their rivals the New York Red Bulls.

The Union will now get ready to do battle with the defending MLS Champions Atlanta United on Thursday October 24 at 8PM on ESPN2 from Mercedes-Benz Stadium in Atlanta, GA