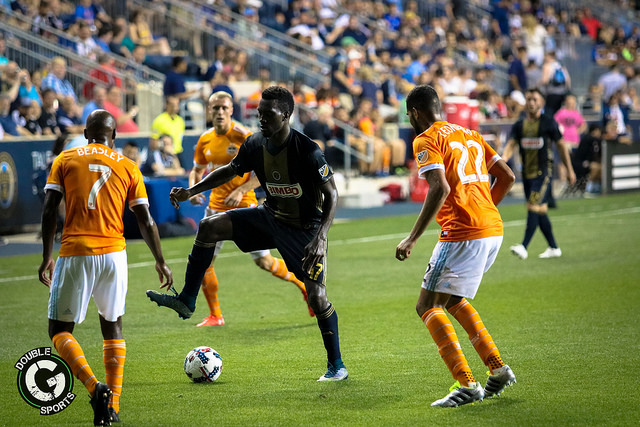 The Philadelphia Union won on Wednesday night to complete a highly unlikely trifecta of victories. Starting with a 3-0 drubbing of a rival Red Bull team who had come in hot, they followed that up with an away victory at DC to the tune of 4-0, and finished the string of results winning at home to the Dynamo.

These recent results come at a much needed time in the year after the Union had been winless since last August. The team can now point to their recent form as such: Five straight unbeaten, four straight shutouts, three straight wins. The team has shot up the table and now sits in seventh place. Only three points under the red playoff line.

This particular victory was a true team effort. It’s now wholly apparent why Alejandro Bedoya is the resident captain for the Union – he truly embodies the hard worker that won’t always get on the scoresheet. CJ Sapong had another stellar night but did not find the back of the net. His tenacious hold-up play and resourcefulness to get the ball out wide was paramount to the strategy of breaking down Houston’s weaknesses. Chris Pontius chalked up two assists from the sidelines as he whipped in two crosses right to his teammates.

Fafa Picault scored the first goal of the night, and his second straight game getting on the scoresheet. Apparently the absurdness of this season has continued to the on-the-field product as the shortest and fastest man on the field rose above the Dynamo defense to power a header home. The cross came in from Christ Pontius after he picked his head up from the sideline and picked out Fafa who had been sprinting into the box.

The Union continued to play hard and direct defense with several tough saves from Andre Blake as well as Jack Elliot and Onyewu stepping in front of Dynamo attackers. Bedoya led the effort by chasing down 50/50s and running himself into the ground by the end of the game.

The Union secured the three points as Pontius again picked out his teammate Ilsinho who slotted it home from ten yards out. There was a general sense of optimism from the Sons of Ben for the first time this season who did not stop singing and dancing until the final whistle had blown.

A fourth straight victory looks realistic as the Union stay home at Talen Energy Stadium against a deflated Colorado Rapids this Saturday at 7:00pm.