USWNT Coast vs. Colombia, China up Next in World Cup Quest 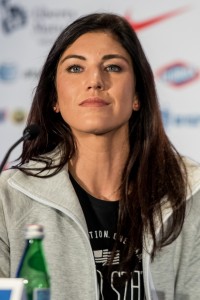 After a goalless first half, the US finally broke through and got past a game Colombia side by the score of 2-0.

Colombia’s Lady Andrade predicted victory for her side.  However, she ended the night without a shot on goal to her credit, and yes, a marginal improvement of a 3-0 score-line to 2-0.

Although once again not aesthetically pleasing, and overall unable to take advantage of what became a 10-player Colombian side, the US did walk away with another rather comfortable 2-0 victory.

Once again, the US pitched the shutout as Hope Solo only had to make 2 saves on very long range attempts from Colombia.

US thought they had an early lead when Abby Wambach powered home a rebound from deep inside the box.  However, she was questionably called offside despite the fact that there was a defender behind her and her goal was off the touch of Colombia keeper Catalina Perez.

2 minutes into the second half, Perez was red carded for a bad foul that sent Abby Wambach to the spot for a chance to rectify the earlier disallowed goal.

However, Wambach’s attempt went badly wide left and the US was left in a 0-0 game, but up a player against Colombia.

6 minutes later, Alex Morgan found the net with a strike from the side of the box that put the USWNT up for good in the game.

Morgan, a bright spot for the US, played a full 90 for the first time this tournament.

Up a player, the US dominated possession, but gave the ball away many times throughout the second half as linkup play continued to be an issue for the US midfield.

Megan Rapinoe, who picked up a yellow card for a bad foul that will keep her out of the quarterfinal, challenged the Colombian backline twice and the second time was rewarded with a foul that sent the US to the spot.

Instead of Wambach, the US opted for New Jersey native Carli Lloyd who slotted home to put the US up 2-0 which would be the final score.

Lauren Holiday also picked up a second yellow of the tournament that will keep her out of the quarterfinal tie against China.

The US offensive strategy still seemed to be playing long balls into the box for Wambach and Morgan and linkup play through the midfield continued to be a struggle.

Bur once again, the back line was perfect for the US as the US recorded their third clean sheet of the World Cup.

USWNT vs. Colombia: What can we Expect from this Round of 16 World Cup Tie?
8th Edition of Steve Nash Foundation Showdown Hits New York This Week!